It’s not going to solve the affordable housing crisis in Pittsburgh on its own. But Inclusionary Zoning is a great tool for creating more below-market-rate housing units, and has been fairly successful so far in Lawrenceville.

Inclusionary Zoning legislation — which requires larger residential construction developments to make a percentage of units affordable to low- or moderate-income residents — has had an impact, even in the runaway train that is the Lawrenceville housing market. Now, Polish Hill and Bloomfield — two dense city neighborhoods that are becoming more attractive to developers — are seeking to try Inclusionary Zoning.

District 7 City Councilwoman Deb Gross is working on the legislation. In 2019, Gross and leaders from Lawrenceville community organizations pushed forth a pilot program in that neighborhood, called an Inclusionary Housing Interim Planning Overlay District (IPOD-6). The program required that any new building with more than 20 units had to include 10% of the units at a lower cost — same unit, lower rent or price.

Since then — in spite of a worldwide pandemic that stopped most construction for a time — 40 affordable units were created in Lawrenceville.

To underscore the need for such legislation, Gross says, “There are census tracts in Lawrenceville where the housing prices went up tenfold. Yeah, a $40,000 house becomes a $400,000 house.”

“You know, if you don’t live in these neighborhoods you may not realize just how quickly both the rent is going up, and that home sales are going up,” says Gross, who represents Polish Hill, Lawrenceville, and Bloomfield. “Really, just in the last couple of years alone, prices of houses in Polish Hill have tripled.

“These kinds of huge price jumps actually make it impossible for people to find housing in the city. We’re actually required by the federal government to make sure that we spread affordable housing around, and we have it even in ‘neighborhoods of opportunity.’… This is a really great tool to use to make sure that a neighborhood doesn’t become all expensive housing.”

Christina Howell, executive director of the Bloomfield Development Corporation, says, “It’s not a lot; it’s a drop in the bucket and what’s needed citywide, but it is something and it’s certainly not the only approach Bloomfield is using to create new affordable housing.”

Lizzie Anderson, president of the Polish Hill Civic Association, explains, “From 2015 to 2018, the average property sale price our neighborhood tripled, from $70,000 to over $210,000. Our neighborhood has a long history of being a place where families of any income level could find a home; we want to make sure the neighborhood maintains affordable options.”

“Affordable” means that inclusionary rental units be set aside for households earning no more than 50% of the Area Median Income (AMI). For-sale developments have to make those 10% of units available for people earning no more than 80% AMI. The IPOD doesn’t apply to renovation or construction of single-family homes or construction of buildings with fewer than 20 units.

According to HUD (U.S. Department of Housing and Urban Development), the median income for a family of four in the Pittsburgh region is $84,800.

While the legislation in Lawrenceville is a permanent overlay, Bloomfield and Polish Hill are trying it on a trial basis.

“We want to take that 18 months and actually try to see what that looks like here,” says Howell. “We just really want to preserve a balanced approach to development, to make sure people can stay in the neighborhood, and have access to the jobs and transportation and everything that is here that can keep the cost of living low.”

There will be plenty of time to engage the public about the plan, with lots of required public hearings. Gross estimates that it will take several months for the legislation to work its way through the system. Public support for affordable housing is overwhelmingly popular, based on recent history. 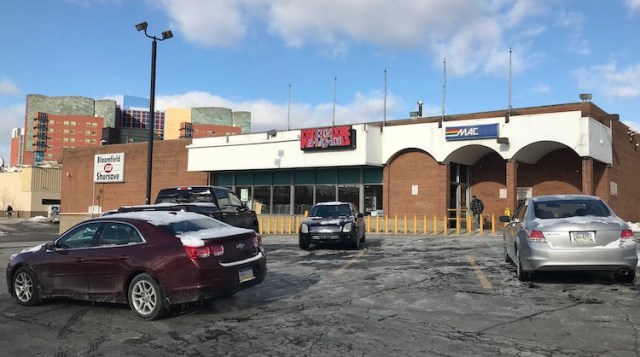 Bloomfield’s ShurSave, which has seen lots of interest from developers.

“In our neighborhood, we heard loud and clear,” says Howell. “In 2018, when we held the community process for the Milhaus (Development) proposal for the ShurSave (grocery) site, we had upwards of 450 some people show up to the community meeting. And another 3000 people watched the livestream on Facebook that night and over the next week. We heard a unanimous call — except for about 18 people who spoke against it — but everybody else overwhelmingly spoke for the need to include affordable units, which Milhaus patently did not want to do.”

It’s worth pointing out that not all of Pittsburgh has been attractive to developers.

“In other parts of the city, there are thousands of empty lots that have been abandoned for decades,” says Gross. “So we are in a city right now of dramatically different, opposite markets.”