Affordable housing has been one of the top concerns in Pittsburgh these past few years, as prices have started to skyrocket in certain neighborhoods after decades of stagnation.

At the same time, the team also broke ground on the Harvard Beatty apartment building, which will replace a surface parking lot at the edge of East Liberty’s business district. Harvard Beatty will feature 42 apartments (33 affordable, nine market-rate, eight for HACP voucher holders). The black-and-grey, metal-clad apartments were designed by Pittsburgh architecture firm Perfido Weiskopf Wagstaff + Goettel, who also designed Mellon’s Orchard South. The project will cost $14.3 million and is expected to be completed by late 2022.

“These projects represent the brick-and-mortar affordable housing we need, but they also represent investment in our most important assets — our people, our businesses and their visions,” says Mayor Bill Peduto. “I’d like to thank all of our partners who have made these projects a reality, and especially thank (East Liberty Development, Inc.) and the Penn Plaza Support and Action Coalition for their most important contributions to its success.” 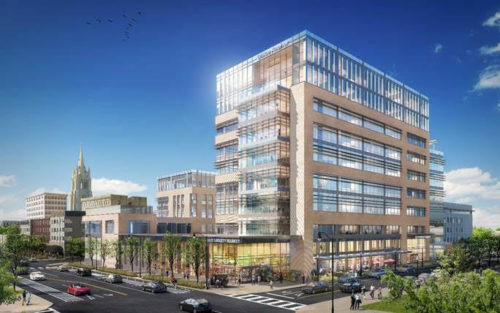 It’s been more than five years since 200 residents were displaced by the demolition of the Penn Plaza apartments, which sparked a general outcry about gentrification in East Liberty. That location is being developed into a massive mixed-use tower, with 252,000 square feet of office space above a new, larger Whole Foods grocery (50,000 square feet).

Fourteen former Penn Plaza residents are currently living in Mellon’s Orchard South. The development also includes six accessible units for people with disabilities and one for those with sensory impairments.

These new affordable projects won’t solve the problem of affordable housing in East Liberty but will give residents with lower incomes a chance to stay in the neighborhood.

East Liberty — traditionally a crossroads of several thriving urban corridors through Bloomfield, Highland Park and Shadyside — is becoming rich in distinctive amenities, like Trader Joe’s and the Kelly Strayhorn Theater. Even during the pandemic, the long-neglected business district has been steadily filling with new restaurants, shops, nightspots and hotels. It is even home to Pittsburgh’s famous new multibillion-dollar tech “unicorn,” the language-learning app Duolingo.

As part of the Mellon’s Orchard South project on North Beatty St., TREK worked with the city to rebuild the street grid that was disconnected in the 1960s during the creation of Penn Circle, a one-way loop around the main business district. The project rejoins Beatty and Harvard streets, reestablishing a connection lost more than 65 years ago.

“We are honored and proud to be a member of this team working to address important questions around urban redevelopment, affordability and the future of the East Liberty neighborhood,” says William Gatti, CEO and president of TREK Development Group.