Though it’s one of Pittsburgh’s strongest local arts organizations, the Pittsburgh Glass Center hasn’t always received the recognition it deserves.

“For a long time, the Pittsburgh Glass Center was known better nationally and internationally in the glass world, than we were even locally,” says Executive Director Heather McElwee. “Local folks would still call us and say things like, ‘Can you repair my windshield?’”

Awareness of the center just got a big boost after McElwee was a judge on the Netflix reality glassmaking competition show, “Blown Away.” Her episode, the fourth in the show’s second season, debuted on Jan. 22.

“Since that episode of ‘Blown Away’ premiered, our website clickthroughs have increased by 1,000 percent,” says McElwee. “We have actually gotten a bunch of emails from people saying, ‘I saw you on Blown Away and I want to learn to blow glass.’”

The show features 10 glassblowers vying for $60,000 in prizes and a residency at the Corning Museum of Glass in New York. It’s hosted by YouTube star Nick Uhas and renowned glass artist Katherine Gray, at “North America’s largest hot shop,” in Hamilton, Ontario. The show finished filming in February 2020. Other guest judges include Bobby Berk from “Queer Eye” and NFL player Stephen Weatherly.

Every episode has a theme, so the glassblowers have to craft perfume bottles — or cartoon characters or elaborate centerpieces for an elegant dinner table — with a goal.

The fourth episode of the second season is titled “Force of Nature,” and the artists were asked to make pieces about climate change with a message of hope.

“They knew that the Pittsburgh Glass Center was built in such a way to be as environmentally friendly as possible,” says McElwee. “When our building was built, it was a LEED Gold certified building. We could recapture a lot of the waste feed from our furnaces and recycle it to heat our building and hot water. So they thought that was a good fit there.”

The contestants approached their assignments in wildly different ways. One made an infinity loop out of what looked like scavenged greenery from the forest floor (made of glass). Another made icebergs, packaged as if they were shrink-wrapped and commodified and ready for shelving.

The latter involved a glass-sculpting technique that even these world-class artists had never seen before.

“What Chris Taylor did — the French Pull — where he made the glass look like cling wrap around an iceberg, was a truly incredible technique,” says McElwee. “I’ve never seen someone do that before. That was really stunning.”

Though there was impressive artistry on display, some contestants had trouble addressing the meaning of the challenge, which was to convey hope in the context of climate change and the environment. Understanding and interpreting the challenge is almost as important as demonstrating individual skill and technique.

“Blown Away” image courtesy of Netflix.

“A lot of them created really powerful messages, but they weren’t particularly hopeful,” explains McElwee, who notes that the winner of the challenge in that episode also received a residency at the Pittsburgh Glass Center.

The show is made for a general audience and seems to have found it.

“It’s not made for glass people; it’s made for the average person, and so they do a great job of explaining the techniques and the tools and showing this incredibly visual art form,” says McElwee. “And it’s so visually stunning, watching the torches and the flames and the fire and all the different colors you can implement. So I think they do a beautiful job of conveying all of that.”

If there’s a downside, it’s that Covid has restricted the Pittsburgh Glass Center’s ability to meet all the new interest in glassblowing.

“The only sad thing about all of this is that in normal times, we have hundreds of classes running, which serve 8,000 to 9,000 students a year,” says McElwee. “Right now, of course, things are highly limited and so we’re hoping that everybody’s enthusiasm for learning to blow glass can hold on for a little bit longer.” 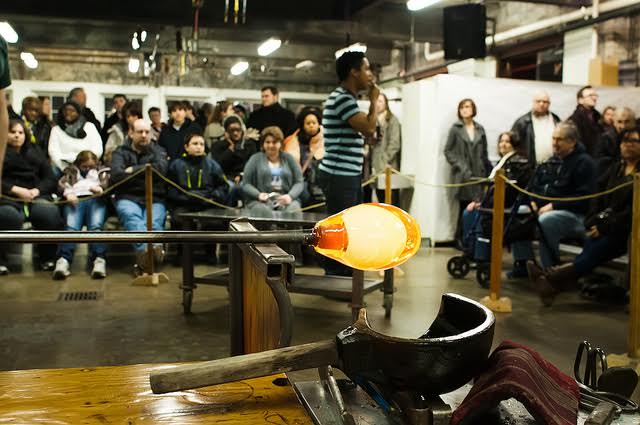 The nonprofit glass education center, gallery and state-of-the-art glass studio fills a special niche in Pittsburgh’s arts community. Anyone can watch the live hot glass demonstrations, and anyone can take classes. Right now, they’re offering what they call “Pod Workshops.”

Normally, there would be, say, six seats available for a class making glass paperweights, and six totally random people could sign up. Right now, they’re catering to people in quaranteams or pods.

“If the four people that are in your pod want to come and do an activity,” says McElwee, “then we’ll do it that way so that you know people are feeling safe with the people that they’re bringing.”