This week, the Allegheny County Health Department levied a civil penalty of more than $1.84 million against U.S. Steel Corp. citing air pollution from the Clairton Coke Works, the latest step in what could become another legal battle between the two entities.

The fine, which was hailed by County Executive Rich Fitzgerald as an “extraordinary step that was over a year in its making,” covered 153 “hydrogen sulfide (H2S) exceedances” between Jan. 1, 2020 and March 1, 2022. Hydrogen sulfide, which frequently produces a rotten egg or sulfur-smelling odor, was recorded at the county’s Liberty monitor, located about two miles from the nation’s largest coke plant.

“I’ve made it a priority to empower our Air Quality Program staff to aggressively protect the rights of all county residents and visitors to clean, healthy air,” Allegheny County Health Department Director Dr. Debra Bogen says. “All sources of pollution are held to the same standards, and we will continue to hold accountable any company or facility that does not meet those standards. I applaud the hard work and diligence of our [Air Quality] team in collecting and analyzing the voluminous amount of data that resulted in today’s action, and I hope residents do, too.”

U.S. Steel confirmed that it had received the enforcement order but questioned the health department’s methods. 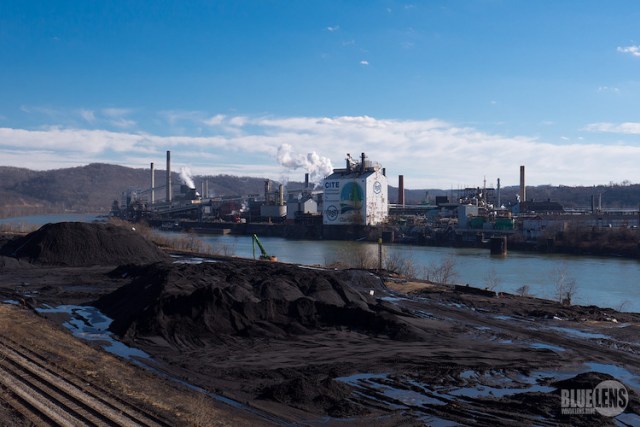 According to its enforcement action — which is available online to the public — the health department calculated its penalty based on, but not limited to:

For example, the county has taken 12 enforcement actions against U.S. Steel in the past two years, which accounts for $801,100 of the $1,842,530 penalty total, according to the report.

“Following the issuance of the Notice of Violation on April 1, 2021, U.S. Steel did not take any corrective actions to try to minimize or stop the exceedances of the H2S standard caused by the Clairton Coke Plant,” the report reads.

If U.S. Steel does not comply with the penalty, it could face additional civil penalties of up to $25,000 per violation per day, according to the health department.

Environmental groups, many of which have made claims for years about how emissions from the Clairton plant were thwarting air standards, were pleased with the announcement but wished Allegheny County would go further.

“This enforcement action confirms what so many have suspected for so long: that U.S. Steel’s Clairton Coke Works facility is responsible for the ongoing exceedances of the state’s 24-hour average standard,” says Patrick Campbell, executive director of the Group Against Smog and Pollution (GASP). “This action has been a long time coming and is hopefully the first step in rectifying the issue once and for all. The Mon Valley communities surrounding the plant have endured poor air quality for long enough.”

Matthew Mehalik, executive director of the Breathe Project, says he is “pleased that the county executive has finally recognized that there is still much to be done.”

“Our air quality standards are more than a decade old, and they are likely to be brought up to date this year, so we need to be pursuing air quality performance at U.S. Steel and Allegheny County that reflects a foundation built on the health of families in our community,” Mehalik tells NEXTpittsburgh.

Mehalik calls the $1.8 million penalty “a small step in the right direction.”

“U.S. Steel has been paying quarterly fines between $200,000 to $300,000 since 2019. These fines appear to be pursued as the cost of doing business,” Mehalik says. “The most recently announced fines of $1.8 million sound like a lot [but] to put this into perspective, this is like imposing a fine of $15.68 on a typical Pittsburgh household earning the median 2019 income of $48,711. This is less than a parking ticket. This is the cost of a fast-food meal.”

Howard Rieger, who convenes resident-led town halls on the subject of clean air, spoke about his concerns with the Clairton coke plant during a recent Title V forum, which was attended by Bogen.

Title V of the Clean Air Act requires major sources of air pollutants, and certain other sources, to obtain and operate in compliance with an operating permit. Sources with Title V permits are required to certify compliance at least annually.

The Clairton plant’s Title V permit, which U.S. Steel negotiates with the county health department, has not been reissued in nearly five years.

“All we’re doing is saying, ‘Do your job, regulators — go after these companies who pay to pollute,’” says Rieger, who served as president/CEO of the Jewish Federations of North America from 2004 to 2009. “It’s a business expense for them. We need a healthier future. That’s what we’ve been pushing for.”

Area residents have recorded more than 60,000 smell complaints in recent years — many driven by “smells like sulfur/rotten egg” concerns, which stem from hydrogen sulfide emissions, according to the Breathe Project.

“The [health department] findings leave no doubt that Clairton Works is responsible,” says Mehalik. “The facility exceeds the state’s H2S standards on average of over 50 times per year over the past 20 years. Our region is ranked in the top 1% of counties nationally for cancer risk from point source air pollution; 90% of the cancer risk comes from coke oven emissions, and 90% of the coke oven emissions come from one source — the Clairton Coke Works.

“The violations and health damage need to stop.”