From a distance, “Small Town America” has a certain mythical charm, as a bastion of wholesomeness and tradition and stability. But some small towns are distinctive, unusual, even a little weird — and Western Pennsylvania has a lot of them.

They’re not as old as those in the eastern side of the state, but most still date back to when America built towns for people instead of cars. Some are fairly remote, while others are quasi-suburbs somewhat connected to Pittsburgh. Some are successfully reinventing themselves for the current age; some are finding success by staying exactly the same as they’ve always been.

All have at least one thing in common — a walkable core with main streets that invite you to get out of the car.

(Full disclosure — most of my visits to these places were pre-pandemic). 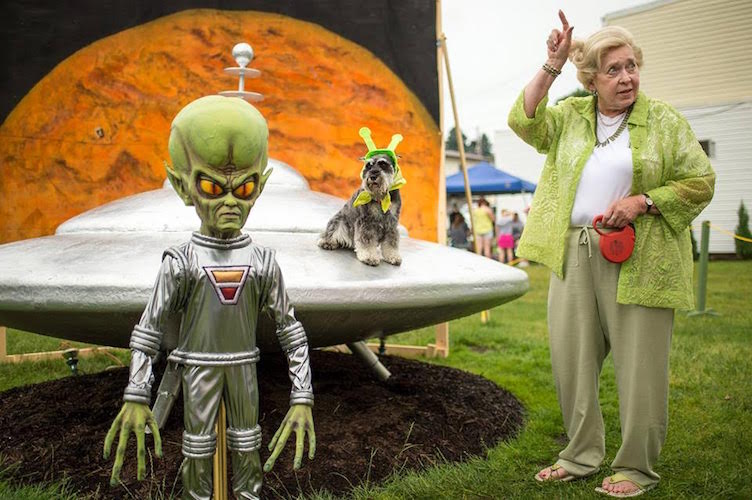 Well, how about that — there really is life on Mars. Even better, you can drive from Moon to Mars in less than an hour or so, all without leaving Western PA. The tiny Butler County town is both charming and weird — and leans into its name with a big flying saucer sculpture in the town square and a festival called Mars Exploration Celebration Days (Aug. 27-28). There’s an interesting antique shop, a candy store, a picturesque little train station and red caboose — and ample Martian kitsch for sale. The Breakneck Tavern is a rustic, farm-to-table restaurant with 40 beers on tap, constructed with reclaimed railroad rail and spikes and antique barn doors.

Pittsburgh’s favorite outdoors trek starting point boasts rushing rapids perfect for kayaks and white-water rafting, stunning waterfalls, isolated swimming holes and forested paths for all levels of hiking ability. All of the towns along the Great Allegheny Passage bike trail are worth checking out and you can do them all by bike, on a (mostly) flat riverside trail, covered with a cool, shady canopy of green. But Ohiopyle is the obvious place to start and has the infrastructure (float tours, kayak rentals, ice cream shops) to get you off on the right foot. Nearby is Frank Lloyd Wright’s Fallingwater, universally hailed as an American architectural masterpiece. But Wright’s Kentuck Knob is also close by, and almost as thrillingly beautiful — and actually seems like a place you could live in.

Butler is one of many Western Pennsylvania towns and small cities once defined by making things — in this case, where the Jeep was born — still trying to find its way in the new economy. Unlike some, Butler is clearly on the comeback trail. Now, its commercial core is brimming with destination breweries like Butler Brew Works and Reclamation Brewing Company, with the hard-to-argue-with slogan: “We’re not beer snobs … We just think beer shouldn’t be crap.” Butler also has one of the region’s most unique (and unexpected) artistic attractions, the Maridon Museum, which focuses on Chinese and Japanese art and German Meissen porcelain. In 2012, Smithsonian Magazine named Butler one of  the “20 Best Small Towns in America” (No. 7).

Just north of the city is Playthings, Etc., one of the most amazing toy stores to be found anywhere, housed in what looks like a massive crashed-landed spaceship. For dining, The Chop Shop is full of surprises — despite the meaty name, it’s surprisingly good for vegetarians, with dishes like Tempeh Gyro and Seitan Shawarma alongside Pork Osso Bucco and the Buttermilk Fried Chicken Sandwich.

Saxonburg was founded in 1832 by German immigrants F. Carl and John A. Roebling. John would later invent a wire cable used to raise canal boats over the Allegheny Mountains and go on to design the iconic Brooklyn Bridge. You can see Roebling’s shop in Saxonburg, next to a replica of the Brooklyn Bridge. More than 30 buildings along Saxonburg’s Main Street are at least 100 years old, and the whole street was named to the National Register of Historic Places. The Hotel Saxonburg has five rooms decorated in period (1832) style, and a restaurant.

This tiny town has a ton of great things to eat, starting with an old-school butcher shop, Thoma Meat Market — with everything from kielbasa to maple sausage — and Batch, which specializes in homemade jams and jellies, from Raspberry Almond to Garlic and Hot Pepper Jam. There’s also a brewery cafe, Conny Creek Brewing (inside Sprankle’s Neighborhood Market), Main Street Bake Shop and Saxonburg Coffee & Tea. Then there’s the Speckled Hen Chocolate Co., which clearly has a sense of humor. When the Covid nightmare began and there was a rush on toilet paper, Speckled Hen made their own edible chocolate toilet paper. Fun fact: high-tech industrial giant II-VI is headquartered in Saxonburg, in case you need optical parts for your industrial laser (you never know). Sept. 10-12 is the Saxonburg Arts Festival.

Zelienople seems threatened by the growing suburban blob of strip malls and McMansions emanating from Cranberry. But it’s also a town that’s making a concerted effort to revive its town center. The restored Strand Theater features movies, music and theatre, both local and national acts.

Food is a big draw to “Zelie,” with the showstopper being the Italian masterpiece Della Terra. Run by chef Fiore Moletz, the restaurant moved from a nearby strip mall into the opulent old Mellon Bank building in the center of Zelienople in 2019. For more down-to-earth dining, there’s Burgh’ers Brewing, a chef-driven burger joint that happens to brew its own beer. The burgers are all named after Pittsburgh places, like the Polish Hill (with cheddar, caramelized onions, mayo and pierogies on top) and the Strip District (with blue cheese, bacon and mixed greens). Don’t miss Baldinger’s Candy — an actual 1933-era penny candy store with an antique register and giant buckets of every kind of bulk candy, including hard-to-find stuff like Mary Janes and Dutch licorice. While there, take a side trip to Evans City, home to the cemetery in George Romero’s horror landmark “Night of the Living Dead” (1968).

Right next to Zelienople, Harmony is really tiny (like fewer than 900 people), but preserved extraordinarily well from its days as a refuge from the religious persecution that the Harmony Society faced in Germany in the early 1800s. They were successful in business (also settling in Economy, now Ambridge), but one of their tenets was celibacy, so they eventually disappeared. Today, Harmony has its own museum with tons of special events, including A Night at the Tavern on Sept. 17. It also has two German bakeries — Lagerhaus Bakery (which has a stunning wine cellar available for rental events) and Two Fraus Bakery, locally famous for its Pretzel Saturdays, where you can watch pretzel makers in action.

The utterly charming German coffee shop Wunderbar — located in a historic former opera hall — is worth the trip alone, with savory crepes and Belgian waffles. There’s some unusual shopping, too, including the Appalachian Rock Shop, full of glittering geodes and crystals, fossils and handmade jewelry. The Little Green Bookstore may be little but carries more than 1,200 books, and Neff Haus Ice Cream serves treats out of an 1807 Harmonite house. A beautifully converted 1856 hotel, the Harmony Inn, is a close relation of North Country Brewing in Slippery Rock and just might be haunted. Expect to find 50 (!) of its beers on tap, as well as a menu of hearty German food and plenty of sandwiches.