The best pierogies in Pittsburgh were made by my grandma. I can still smell the butter and onions wafting through her kitchen as I rambled underfoot, scheming about how to hit the cookie jar before dinner.

Second place, of course, goes to someone else’s grandma (yours maybe?) working the dough in a western Pennsylvania church basement.

After that, the good news is this: Even if we take grandmas and churches out of the equation, there are still a bunch of great places to get this quintessential Pittsburgh food around town. Once shunned by restaurants, it’s now a staple for those who want to add some local flavor to their menu.

Here are the best:

The folks at Apteka do the unthinkable on a daily basis — make heavy, hearty Eastern European food vegan — and make it well. Apteka is easily one of Pittsburgh’s best and most original restaurants. To survive a winter in Eastern Europe, you have to pickle things to eat later, and that’s the secret sauce for Apteka; they are master picklers. The sauerkraut and mushroom pierogies, served with double fat cream, roast cabbage and beet horseradish — as well as the potato and spinach pierogies — are also thinner and lighter than competitors. Which means … you can eat even more of them. 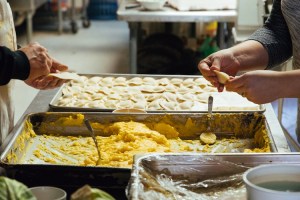 Making pierogies at Cop Out. Photo by Tom O’Connor.

The mad scientist of Pittsburgh pierogies is a former policeman in Etna, who will put just about anything in a soft, doughy dumpling if it seems like it might be delicious. Usually, it is.

Carl Funtal has tried some ridiculous things at Cop Out. Mac and Cheese pierogies, he admitted, sound potentially terrible (pasta inside pasta?). But they’ve been a huge seller (Spaghetti pierogies, however, were a disaster). Chicken Parm and Chicken Marsala pierogies also turned out great. They also make Buffalo Chicken and Pepperoni Pizza pierogies. Reuben pierogies are also bestsellers. New flavors include Shrimp, Grits & Bacon pierogies and Watermelon, Tequila and Habanero pierogies. And don’t forget to finish your meal with the dessert “pie-rogies,” including Bavarian Cream, Salted Caramel and Lemon Cheesecake.

The standard by which all other pierogies are judged — and the supplier to most bars and restaurants (such as Gooski’s in Polish Hill and Hop Farm Brewing in Lawrenceville) that don’t make their own — is Pierogies Plus. It should be said that making pierogies is hard and takes forever — but this crew of seasoned Polish grandmas working out of a former service station in the Rocks has it down to assembly line precision. They make them thick and hearty — sauerkraut and potato, cottage cheese and chives and hot sausage are the classics. They also have added mini pierogies for more of a bite-sized approach.

Another of Pittsburgh’s best restaurants by any measure allocates valuable menu real estate to the humble pierogie. Butterjoint, the bar adjacent to Pie for Breakfast, has a great and surprisingly cheap menu of scratch-made bar food, including outstanding pierogies. In this case, the chefs adhere to the classic formula — potatoes and house-made farmer’s cheese with caramelized onions and sour cream on the side. You can buy a dozen for takeout for $18.

First off, it’s a mild disgrace that Pittsburgh only has one Polish restaurant, now that the Bloomfield Bridge Tavern is finished. Luckily, those who run S&D don’t see their lack of competition as a reason to get lazy. They’ve got expertly made pierogies in all of the classic varieties. Go for the kraut and mushroom or farmer’s cheese and potato pierogies, then stay for the Polish kitsch on sale in the adjacent store (I got a Polish national soccer team jersey there once). Bonus: You can get all the Polish sausage your heart desires.

Food may be a distant third when it comes to reasons to visit Church Brew Works, after the beer and the atmosphere of the former St. John the Baptist Church itself. But in the same way that the owners anticipated the craft beer revolution, they started doing “untraditional pierogies” back when that was a borderline insane idea. They once had ingredients from rattlesnake and seared cactus to spicy pulled pork inside pierogies (!). Now, they seem to have retrenched a bit — their current menu only features traditional pierogies, potato and cheese topped with sautéed onion, melted butter and sour cream. 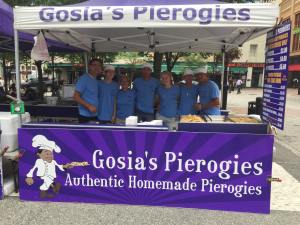 If you encounter a pierogie in the wild and it’s not from Pierogies Plus, it’s probably from Gosia’s. Though their home is in Latrobe, they have long had a stand in Market Square during the warmer months and can also be found at the East End Food Co-op. Gosia’s claims their “secret family recipe originated in Poland and [was] handed down generation to generation,” which sounds legit (my grandmother wrote nothing down, and we had to reverse-engineer her recipe from memory). They make all the standards, plus cheddar cheese and jalapeño, sweet potato, sweet cabbage and potatoes and feta. They also ship pierogies by the dozen in coolers, directly to your home.