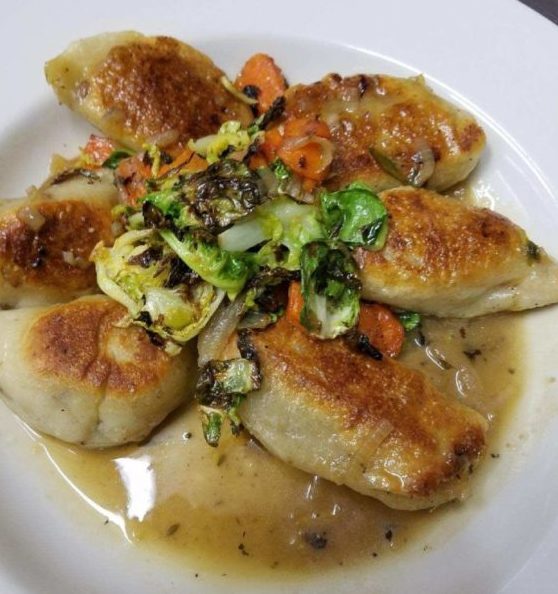 On Eighth Avenue, well removed from traffic and the national chains of The Waterfront, lies Dorothy 6, named after the late steel mill in Duquesne. It’s a bar with an industrial-strength vibe, with lots of exposed brick and artifacts from old steel mills, including a giant crane hook looming above the bar. It’s exactly the kind of place that ought to have pierogies on the menu, and these are terrific. They look and feel traditional — the dough is on the lighter side, served with caramelized onions and herbed sour cream. But the fillings — including cheddar and spicy jalapeno — are rich and heavy.

You’ll find the biggest pierogies (is that a burrito? a calzone?) you’ve ever seen — giant pillows of buttery, oniony, potato-filled goodness — at the Starlite. One eats like a meal, but they’ll give you several, of course. Adjacent to Pittsburgh’s home of the blues, Moondog’s, this divey, unpretentious spot couldn’t be more Pittsburgh if it came with fries on top. Guy Fieri’s “Diners, Drive-Ins and Dives” featured the place, which raised its national profile a bit.

There’s probably more than one pierogie truck out there in Pittsburgh, but this one grabbed the simplest, most direct name: Pittsburgh Pierogi Truck. It’s “a bunch of Polish kids” who grew up pinching pierogies at St. Vladimir’s in Arnold, who now have a bright-red truck that travels from an auto shop in Natrona Heights to the Shaler North Hills Library. They stick to the basics, mostly — Potato and Cheese pierogies, Halushki (cabbage & noodles) and Stuffed Cabbage. You can also buy some pierogie varieties frozen, such as Kraut and Mushroom, Potato and Bacon, and Beef.

Who could forget the taste of pierogies? Still, if you need a reminder, Forgotten Taste is here to help. Beautiful renditions of all of the standards are here — Potato and Sauerkraut, Cottage Cheese, etcetera. But there are some unique flavors as well, such as the house-made Hot Sausage pierogies and the Lekvar pierogies, filled with a sweet, old-fashioned prune butter. The Wexford location is open for dine-in and takeout service, and the Coraopolis location is currently open for takeout only.