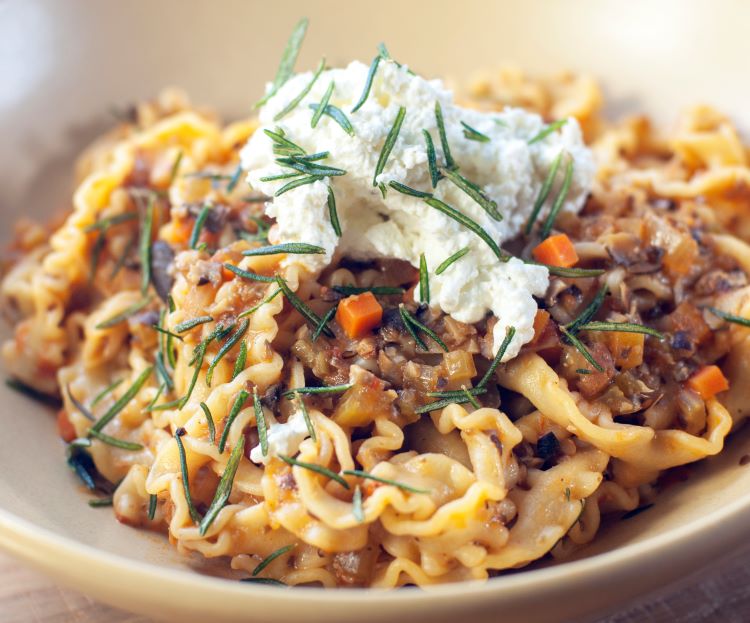 Pasta is made fresh daily at Alta Via. Photo courtesy of big Burrito Restaurant Group.

Alta Via, big Burrito Restaurant Group’s Italian eatery in Fox Chapel, is opening a second spot in the city. The menu focuses on modern Italian cuisine made over an open wood-fired grill.

Arboretum Trail is “leafing” its residential garage and branching out to a 5,700-square-foot building recently vacated by Couch Brewery. It’ll be open for business this summer.

Virginia-based Aslin Beer Co. will occupy a 10,000-square-foot space in the Strip District Terminal this August with a 10-barrel brewing system and food by Scratch & Co. in Troy Hill.

The beer-makers are moving their business from the back alleys of Dormont to the borough’s former municipal building. You can order cans online to tide you over until the spot opens this summer.

Back to the Foodture, 1014 Fifth Ave., Downtown

In addition to revving up the ol’ flux capacitor on a food truck, the South Side-based restaurant is opening a Downtown site in the near future. The 6,300-square-foot space, which was Buford’s Kitchen, will feature pool tables, dart boards, pinball machines and a private party room.

Get gluten-free goodies and vintage kitchenware all in one spot when this bakery opens in June.

Chef Fernando Navas and Pittsburgh native Meredith Boyle are opening a restaurant this fall that shines a spotlight on the flavors of Argentina.

The East Coast taco chain has set its sites set on launching a taco joint at Ross Park Mall this fall.

Café Momentum hires teens emerging from the justice system, trains them in the restaurant business and gives them life skills so they can reach their full potential. Community outreach paired with gourmet dishes? Now that’s forward-thinking.

Later this year, the folks behind Totopo Cocina & Cantina in Mt. Lebanon and Shadyside’s Tocayo are opening a fast-casual eatery to the former Del’s space in Little Italy.

The buzz is building in Millvale. This summer the flora-to-table honey shop opens in the former Grub Hut space. Patrons can enjoy beverages and small plates and buy local honey and other merchandise — all while learning about bees and their integral role in the ecosystem.

Can you say delicioso? Pittsburgh-based language learning company Duolingo is opening a taco restaurant near its headquarters. The ordering process will double as a Spanish lesson.

Plant-based dishes are on the menu this summer when Eat Your Vegetables opens in Deutschtown.

Given to Fly at Federal Galley, 200 Children’s Way, North Side

Chef Katie Peric’s fast-casual, chicken sandwich concept is something to crow about.

When this 6,400-square-foot taproom opens next year, it will house a bar, lounge and 15-barrel brewing system. The spacious brewery will also boast a courtyard with fire pits.

The vino and charcuterie bar will occupy a space in The Highline later this year.

Lolev Brewing is opening in Upper Lawrenceville this summer. Photo by Kristy Locklin.

The Slesinski brothers began their beer-making business in the lower level of their Philadelphia home. As a tribute to their small start, they’re opening Lolev Brewing’s 7,500-square-foot taproom this July.

Now you can major in Moonlit. Dormont’s smashburger restaurant is opening a second joint at Duquesne University this summer.

Ricky and Michelle Kirsop of Monroeville’s Coast & Main Seafood and Chophouse are bringing their brand of elevated cuisine to the Downtown landmark later this year.

The Speckled Egg, a Downtown brunch destination since 2019, will soon get cracking on a second location in the updated SouthSide Works.

Enjoy the ultimate Pittsburgh outing with great food, booze and views at this watering hole located directly across from the Duquesne Incline station.

The owners of Dr. Tumblety’s Time-Inspired Specialty Shop are big fans of the Big Easy. They’re bringing the New Orleans vibe to Allentown this year, with a speakeasy-style bar and the Inspired by Spirits Distillery.

The North Hills is getting a new hotspot with handcrafted cocktails, a rotating selection of draft beer and modern takes on classic, American pub fare.

The old Duquesne Brewery on the South Side will be bubbling once again when Velum Fermentation opens this spring to sling traditional lagers, seltzers and kombucha teas.

Shadyside’s William Penn Tavern is calling it quits on May 30, but that doesn’t mean it’s last call for patrons. The popular bar is reopening on June 3 at the former Franktuary space. The storefront is a replica of the original spot, right down to the red paint, bobblehead collection and Calvin & Hobbes comic strip.