Josh Fabian of Metafy and his sons.

A high school dropout whose dreams of becoming a professional gamer flamed out, Josh Fabian noticed something interesting. When his sons began to play Pokemon competitively, he found he could hire one of the best players in the world to coach them for $20 an hour. That’s where the idea for Metafy was born. Competitive video gaming is worth billions worldwide — and to be the best, you’ve got to beat the best. Pittsburgh-based Metafy gets you one-on-one coaching from champion-level gamers, at rates starting at $15 an hour, on games games like Fortnite, League of Legends, Smash Ultimate and more than 40 others. There are also 150+ world-class coaches to choose from — and Metafy enables those gamers to make a living doing what they love, playing video games. Metafy recently raised $3 million in seed funding for their platform. 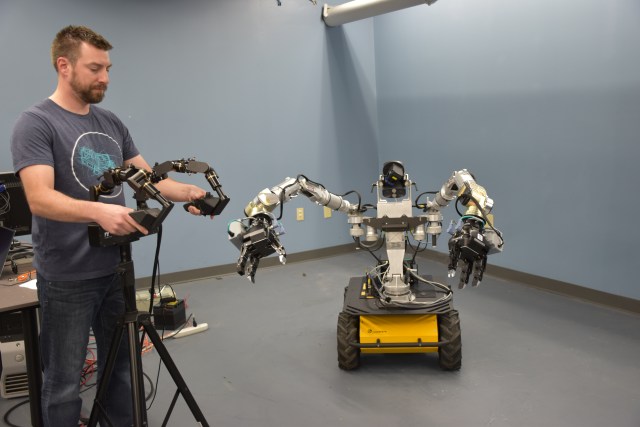 RE2 Robotics specializes in arms — robotic arms that can do everything humans can do, and many they can’t (safely). They’ve been used by bomb squads, underwater Navy explosive disposal work, and nuclear disaster cleanup in Fukushima, Japan. They’ve received more than $1 million from the Army to develop a mobile robotic system to allow medics to extract wounded soldiers from the battlefield. They’ve also developed a robotic kit that you can fasten into the seatbelt in the cab of a construction vehicle that grabs the steering wheel, joysticks, pedals and switches and operates it like a human. This company began as a spinoff from Carnegie Mellon in 2001, but this has been a big year for growth. The company grew their employees by 50% this year, despite the pandemic.

Peptilogics is a clinical-stage biotech firm that designs and develops novel peptide therapeutics. They combine drug development expertise with artificial intelligence and machine learning, to address drug-resistant bacterial infections. They were spun out of the University of Pittsburgh in 2013, and just closed $35.4 million in Series B financing, led by Presight Capital and existing investor Peter Thiel, co-founder of PayPal.

NOVID: the only contract-tracing app to use both Bluetooth and ultrasound frequencies on your phone, to determine your potential exposure to Covid-19

Othot: a startup aimed at colleges and universities, helping them understand which students will succeed or struggle academically

Idelic: a startup that uses AI to predict truck driving accidents, violations and risks, and increase safety for everyone on the road

Smart Futures: PA is the first state to require all students to graduate with a personalized career plan and portfolio. This nonprofit provides educators with a K-12 career planning and portfolio platform.