The last thing I was working on in March 2020 before the Great Pandemic Shutdown was a live music preview for April and May. It still exists as a half-completed file on my computer, a list of phantom of concerts never meant to be.

Now, live music is finally fully back, and there’s a lot of it. It’s not the same, and it won’t be for a while yet. But it’s happening.

There are more shows outside than before, for instance. The virus also claimed some venues, but a concerted #SaveOurStages effort was spearheaded by the National Independent Venue Association — which formed entirely in response to the pandemic. It helped stave off the complete destruction of the live music ecosystem and most venues made it to the other side, at least here in Pittsburgh.

Some places have closed, like the long-lived Rex Theatre on the South Side (now back as The Enclave), and the beloved Brillobox in Bloomfield (which looks like it might reopen in October).

*We should note that many venues require proof of vaccination, negative Covid tests and/or masks for entry, so you should check with the individual clubs. (But really, do that stuff anyway). There are also probably going to continue to be Covid-related cancellations, so make sure you double-check before you go.

Pittsburgh’s best remaining music festival is this free outdoor show primarily showcasing brass bands. Not the sit-down, concert hall type, but the Balkan brass, three-day-Gypsy-wedding-party type, like the Novi Hitovi Brass Band playing this year. That approach has expanded to embrace bands from all over the world — like Son Rompe Pera, spearheaded by Mexico City’s Gama Brothers, who meld the traditional marimba music of their ancestors with the garage rock and hip-hop influences that surround them. There’s also the Latin/tropical futurists of Combo Chimbita, the wild instant-party-anywhere vibes of the Detroit Party Marching Band and the protest march brass stylings of the May Day Marching Band. Everything takes place outdoors. 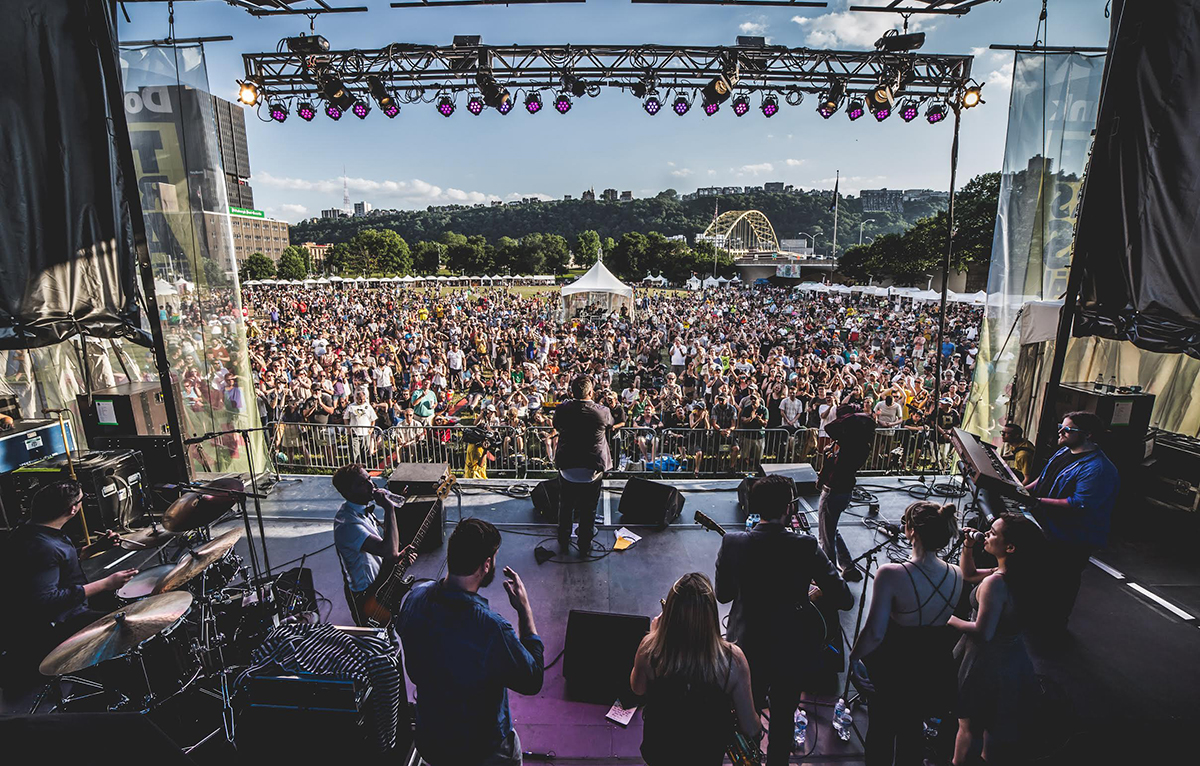 This local music showcase benefits children and youth through the Department of Human Services and the Juvenile Section of the Family Division of the Court of Common Pleas. It starts at 6 p.m., with food trucks and Hop Farm Brewing Co. This year’s headliners include The Commonheart, one of Pittsburgh’s most popular bands, as well as the brilliant power pop of Meeting of Important People, the contemporary soul of Sierra Sellers and young jazz/funk band The Funky Fly Project.

Sept. 5 — Waxahatchee, Katy Kirby: Mr. Small’s Theatre, Millvale
Katie Crutchfield of Waxahatchee is one of the best songwriters working today, adept at taking the listener on lyrical journeys far beyond the typical confines of folk and Americana. Described by Pitchfork ass “the patron saint of emotional chaos,” her latest album “Saint Cloud” reveals an embattled soul, torn by a traumatic break with alcohol and a burning need to say everything that needs to be said.

St. Vincent (Annie Clark) has a slippery and frequently confounding sort of genius, changing guises like a latter-day David Bowie: innocent indie ingenue, mesmerizing future cult leader and now a ‘70s glam queen. This is a recurring theme with St. Vincent — the elaborate, intricately constructed layers of artifice in her music and the opaque, discreet personality behind it. Her music ranges from placid, lullaby-like prettiness to panic attack meltdowns — with every instrument, every sound, every breath locked precisely in place. At times, it falls somewhere between the aggressive sex and danger of PJ Harvey and the ethereal, otherworldly weirdness of Bjork. She’s also probably the best guitar player in the upper echelons of rock music right now.

Her wail on Sonic Youth’s “Death Valley ’69” — one of the most truly unsettling songs ever written — was my introduction to iconic punk provocateur Lydia Lunch, who has been making angry, uncompromising music since Teenage Jesus and the Jerks in the 1970s. She’s got a witchy, prickly onstage personality, half-joking, half-threatening, and spent a few years in Pittsburgh, so she’s entitled to rip us a bit. Now, she’s got a band, Retrovirus, full of wildly clashing styles and talents, including drummer Bob Bert (Sonic Youth, Pussy Galore) and Weasel Walter (guitarist and bandleader for avant-jazz/noise maniacs, The Flying Luttenbachers). This show is at a new venue connected to a punk rock record shop in New Kensington.

What year is this? (No, really. I have no idea). Go back to the delightfully carefree days of yore with Kesha, whose single “TiK ToK” was the bestselling digital single in history in 2009 (before TikTok was even a thing). She’s been through a hell of a hard time since then. One constant is that she mostly writes her own music (she wrote more than 200 songs to pick from for her first album), which makes her extra easy to root for. The show is outdoors.

J Mascis staked his claim as indie rock’s preeminent guitar hero in the mid-1980s, with a wildly original style, copied but never duplicated — a blistering fury of notes, chords and distortion that sounded like a 10-guitar army rather than the work of one man. Plus, he somehow sang over it all, in a reticent, laconic drawl that provided a weird counterpoint to the wall-of-sound guitar work. Well, Mascis is still basically doing the same thing today, except with more gray hair. Ryley Walker, whose new album is “Course in Fable,” is also not to miss.

Writing is not typically a stress-free job. Yet, there are places in the world where the stresses are far more serious than deadlines. In places like Bangladesh, Honduras, Mexico, China and Russia, it’s frighteningly common for journalists, novelists, even poets, to be persecuted, imprisoned, tortured or assassinated for what they’ve written. A few of them end up at City of Asylum on the North Side, a refuge for persecuted writers. And every year, a free Jazz Poetry Festival is put on to honor and showcase persecuted writers around the world, celebrated with a night of live poetry and jazz that’s utterly unlike any other event in Pittsburgh (or maybe anywhere). Now, it’s expanded to almost an entire month of real and virtual events, including violinist and composer Layale Chaker (Sept. 12), Japan’s Norihide Nakajima Quintet (Sept. 14), North Macedonian jazz-fusion group Vlatko Stefanovski Trio (Sept. 19), Vietnamese pop star-turned-activist Man Khoi (Sept. 20), Estonian jazz ensemble Slow Motion Orchestra (Sept. 22), avant-garde American trio Thumbscrew (Sept. 23, featuring guitar virtuoso Mary Halvorson), and Slovenian jazz group Jute Pukl Quartet (Sept. 26).

Rock and roll has an amazing capacity for regeneration, despite all the abuse it has suffered over the years. Deep in the remote, war-torn deserts of the African Sahel, rock and roll is being born anew, via a generation of nomadic Tuareg guitarists like Mdou Moctar. Along with bands like Tinariwen, Bombino and Les Filles de Illighadad, they’ve pioneered a hybrid of electric blues with the hypnotic, indigenous music of the West African deserts. Moctar also wrote and starred in the first Tuareg-language film, “Rain the Color of Blue with a Little Red In It,” a Saharan remake of Prince’s “Purple Rain.”

Algiers is a band with perhaps the most fascinating array of influences of anybody right now — ranging from post-punk fury to liberation theology gospel to Southern Gothic literature. The Atlanta-based band formed in London, choosing the name Algiers to represent the history of colonies rising up in rebellion against their oppressors.