When you want fresh, local produce during Western Pennsylvania’s short growing season, sometimes it’s best to cut out the middleman (the grocery store) and go directly to the farm.

The Pittsburgh area has a few farms that have made this particularly easy, with big, well-organized shops that are often located adjacent to their fields. The big ones are all a bit of a drive from the city, however, but are worth a trip.

In many cases, you can pick your own strawberries, blueberries, apples, peaches and more from the fields. Just grab a bucket and see what looks good.

Got a favorite farm market of your own? Let us know in the comments below or email us. 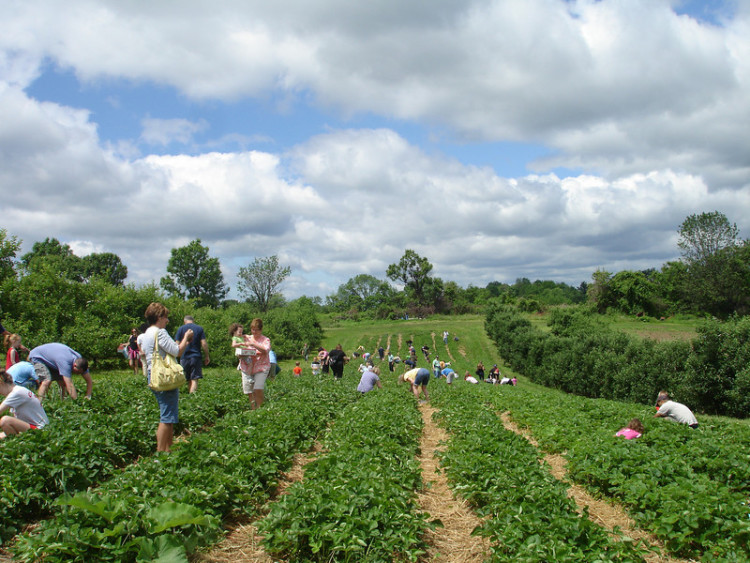 This is the heavyweight champion of Pittsburgh’s northern farms — if it can be jarred, pickled or picked, you’ll find it here. This time of year, it’s fresh blueberries, straight from the fields that rise behind and above the cluster of shops. As far as produce goes, they’ve got everything from cabbage to eggplant, blackberries to onions, cantaloupe to summer squash to tomatoes.

There’s also a deli, a bakery making fresh fruit pies and an ice cream shop — should you need to bribe some children —serving Buffalo’s superior Perry’s Ice Cream. Should you need to bribe some adults, Arsenal Cider has a shop here with nine varieties of cider, some made with Soergel’s apples, and others with pear, honey, raspberry and rhubarb. They’re currently doing curbside pickup.

Plus, Soergel Orchards is probably the best place to buy apples and apple cider in the fall, with dozens of varieties, including some hard-to-find specialties like the sweet and slightly tart Stayman-Winesap.

This place is gigantic, and is probably best known for its literal mountain of pumpkins in the fall, that pretty much every kid under a certain age must be photographed climbing on. Trax also has a sprawling farm shop with entire wings devoted to garden stuff and Christmas kitsch — but a solid array of fresh produce as well, ranging from hot peppers to sweet corn (which they are known for) to grape tomatoes and green beans. Trax makes its own jams, jellies, butters and salad dressings — 27 varieties — and 24 different kinds of barbecue sauce. They’ve also got an Arsenal Cider House outpost for hard apple cider, wines and mead. Right now, they’re letting families do socially-distanced, pick-your-own blueberries.

Freedom Farms is the only farm in Western PA that once had their own reality TV show, “Farm Kings,” which followed the family’s matriarch and 10 strapping blonde children as they worked the 200-acre land.

Meat, such as free-range pastured pork and grass-fed cows, is a specialty here. They even have a sandwich shop specializing in giant hoagies, of course. If there’s one thing that puts this place in a category all its own, though, it’s the donut shop, where you can get something chocolate and glazed or berry-filled and sticky-sweet.

A family-owned farm since 1958, Janoski’s has one of the better farm shops to the west of Pittsburgh, laden with 40-plus varieties of produce — peppers, tomatoes, corn, or whatever is in season. They get eggs from Seibel Family Farm nearby. Plus, there’s Brunton Dairy milk from Aliquippa, in old-school returnable glass bottles. Janoski’s also has a reassuringly rigorous set of policies for pandemic-era cleanliness and social distancing.

Photo courtesy of Triple B Farms.

Though best known for a massive selection of kid-friendly attractions (a petting zoo, the Squirrel Hill tunnel slide, friendly goats, etc.) — all currently closed due to COVID-19 — Triple B also has a nice little farmer’s market with an ample selection of jams, fruits and Amish butters and cheeses. Blueberry picking is now available. They also offer curbside pickup.

This farm and greenhouse — there are actually two locations in McMurray — specializes in a lot of things other than produce, flowers in particular. They do, however, have a nice selection of summer produce, including broccoli, kale, peppers and spinach. You can also pick your own fruit, and peach season is coming up soon. If you want to grow your own, you can pick up plenty of seeds and plants to start from scratch here.