Well, the Land of Always Rain part of the spring has given way to the Hellmouth part of the summer, right on schedule.

The July soundtrack at local clubs and venues is also part ageless wonder, partly as evanescent as the brief morning dewdrops on our browning lawns. No other time of year boasts this many active venues, even if it’s only for a few weeks, so we’ve no doubt missed some good ones. But here are our picks for the July concerts not to miss. 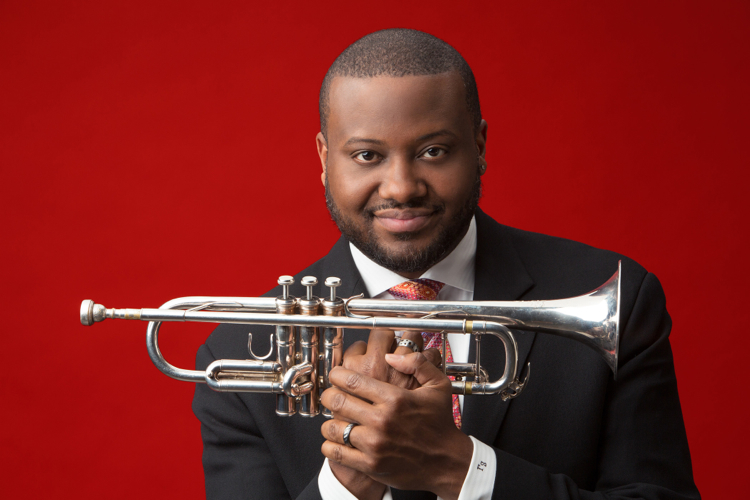 Stephen Philip Harvey is one lucky bandleader. Why’s that? Because he got former Pittsburgher Sean Jones — one of the world’s most skilled, fiery trumpet innovators — anchoring the brass for the tour of “Smash!” the jazz orchestra’s debut album. This is the official album release party at Oakmont’s charming, classic, single-screen movie theater.

Punchline got in their first big zingers way back in 1997, when the Belle Vernon three-piece band recorded “How to Get Kicked Out of the Mall” — because, well, teenagers — and ska-punk was still sort of a thing. The century turned, they signed to Fueled by Ramen, lost the ska, and built a ramshackle pop-punk band into an actual no-sellout career. Now, they’re celebrating 25 years and the decidedly different problems of adulthood.

It’s not easy to get non-jazz fans in the door of a jazz club — people can find it a little daunting. So I’ll put it this way — this venue has better food and drinks than any other in town. Its only real competition is the other Con Alma location Downtown. Like the Dizzy Gillespie tune for which it’s named, Con Alma bops along to its own Latin-inflected rhythm, with a dazzling menu (now fully plant-based) of pan-Caribbean dishes and wildly original house cocktails referencing jazz icons. Oh, the music? This is jazz at its most accessible, played by musicians who can play anything. (How good are they? Seeing my son come in once, they improvised on the “Flintstones” theme and a half-dozen child-friendly favorites just to make a rare kid-in-the-club happy). The third anniversary party will showcase Patrick Breiner Quartet presenting the work modern Pittsburgh composers on Friday, while Saturday features house favorites, the Howie Alexander Trio.

Soy Sos and Bri Dominique. Photo courtesy of the Warhol.

If you were a little confused by The Warhol’s announcement that it’s turning its immediate North Side neighborhood into The Pop District, you’re not alone. But it does such great work programming its venue (and others) that it seems likely it will nail this new venue, too! This experiment is designed for The Warhol’s side alley on a summer evening, with music by local DJ/producer Soy Sos and Bri Dominique, performing a dub-inspired take on PearlArts’ “Synchronized: With Soy Sos” music and dance series.

After years of outright neglect, this summer is seeing an explosion in Black music festivals — and we’re here for it. The four-day event is billed as a tribute to honor Pittsburgh native and influential soul/jazz/dance icon Phyllis Hyman. It kicks off on July 14 with Jazz Day featuring Lalah Hathaway, Debra Laws and the Ronnie Laws Band. July 15 is Gospel Day with Nicole Porter, The Walls Group and Pastor John P. Kee. July 16 is Hip-hop and R&B Day with a Phyllis Hyman Tribute show, elder rap god Rakim and upbeat ‘80s-’90s New Jack Swing giants Tony! Toni! Toné! The final day, July 17, is Jazz, Blues and Soul day with The B.B. King Experience, Brownstone and funk giants The Ohio Players.

Pittsburgh soul singer Kenny Stockard has something to prove, and the pipes to do it. He’s performed on “CBS Sunday Morning” and sang background for Josh Groban and Donnie Iris (name a more iconic Pittsburgh pair …well Josh went to CMU). His first-ever album release show is at the Thunderbird, and he’s teaming up with old friend Livefromthecity (aka Jordan Howard) and new artist Halloway Williams to celebrate.

Ah, mid-July. Time for sipping pink lemonade and listening to “summer goth.” This bill makes zero sense, actually, but some of us enjoy that. The Cult were English goth-rockers that found something elusive in West Midlands gloom, and then stayed there for a few more decades. Black Rebel Motorcycle Club always seemed like a figment of the early 2000s garage-punk revival — I vaguely remember them fleeing the 31st Street Pub when a real motorcycle club showed up, thinking they wanted to fight. But I would give both of those bands a second look for a chance to see Zola Jesus, aka Nika Roza Danilova. Her transformation from experimental nightmare noise goblin to torch singer/vampire Rihanna to nocturnal dance floor diva has been something to behold.

Best band name ever … or worst? Either way, F’d Up (rescheduled from earlier this year) is easily one of the most original bands working in the otherwise moribund hardcore punk genre, pushing it to its limits and often well beyond. Giant, inscrutable 78-minute hardcore rock operas, long flute solos, epic concept albums released in monthly installments (“Year of the Horse”), collaborations with a playwright … these guys have deviated further from Minor Threat’s louder/faster/harder hardcore template than anyone since Hüsker Dü. Live, it’s a chance to witness how almost-extinct Canadian megafauna Damian Abraham’s scorched-earth screams never seem to stop before he jumps on top of you (seriously, watch out in the front row).

Though her long, inward journey has taken her from the windswept wilds of her native Wales to the sun-blasted terrain of the Mojave Desert, Cate Le Bon always seems to end up just skirting the edge of loneliness. Sometimes it’s liberating; sometimes it’s a torment. But it’s letting her make music of incredible clarity and subtlety with lyrics retaining enough surprise and mystery — like the morning desert sun refracted through crystal — to practically require repeated listens.


Well, this is the big one. The whole North Side neighborhood becomes one great big urban musical playground: 500 bands, 100 art vendors, 50-plus stages, 50 food trucks. It’s probably easier to list the local artists that are not playing here, rather than the ones that are. Venues range from the obvious — Allegheny City Brewing, Monterrey Pub — to the obscure, like the Max’s Allegheny Tavern Rathskeller and Teutonia Männerchor. Personally, I think the most interesting thing to see is the return of the newly-renovated James Street Tavern, for decades Pittsburgh’s home for jazz (then killed by nebby neighbors). There’s a good chance you’ll find a new favorite band here, but it’s hard to say where exactly. Pro tip: start with the best/weirdest band names (I like Westinghouse Atom Smasher, Chet Vincent and the Music Industry, and Redd Up Rhonda). There are plenty of outdoor street stages and activities for kids too.

Growing up, the Dickinson brothers had a musical education that few could match. Their dad was Memphis musician/producer Jim Dickinson, who played on everything from Aretha’s “Spirit in the Dark” to Big Star, The Replacements, Toots and The Maytals and Screamin’ Jay Hawkins. Cody and Luther have made a career out of fairly straightforward blues and Southern rock, but they get all the best guest stars (Lucinda Williams, Dirty Dozen Brass Band, Otha Turner) and can keep improvising on a blues theme until the cows come home. As always, this one is free.

Dacus is part of a wave of brilliant young singer/songwriters, including (but not limited to) her bandmates in boygenius, Phoebe Bridgers and Julien Baker. But Lucy Dacus is a complete original, weaving tales of spirituality and sexuality and nostalgia with equal precision, held together by a cool, clear voice that cuts like a blade through the noise of American pop culture.

The weekly Inside Out music and art series at the museum of art is worth your attention, even if you don’t quite know what you’re getting into. That’s because of Boo Lean (Lauren Goshinski), who isn’t just a brilliant multifaceted DJ, she’s the curator and creator of Pittsburgh’s best-ever music festival, the VIA Festival. She knows how to present art and music in concert better than just about anyone. She’ll be back in town here with HUNY (another of Pittsburgh’s greatest synthesizers of music, art and scene) and synth explorer Suzi Analogue. But really, check out more than one Inside Out. This year’s theme is “+1,” bringing a friend from a different scene/city to expand everybody’s horizons.

Photo courtesy of Rage Against the Machine.

Subtle as mini-fridge kicked off a dorm roof by some gym-bro-dude blasting his quads — Rage Against the Machine kinda know that many of their listeners miss the point. That is to combine rap and rock and leftist politics about actual injustices and make them catchy enough to stick. So, well, about half of that worked. That hasn’t stopped them yet. Openers are Run the Jewels, who are usually headliners in their own right — and perhaps the world’s most relevant rap duo at the moment.

Pittsburgh’s Minima are having a release party for the new record “We Were Never Modern” at Brillobox. It’s an ’80s post-punk party at first, though the lyrics are angry and political in a D.C./Nation of Ulysses sense, while the synths and guitars float above it all like The Cure at their most maximalist. Hopefully, this is just the beginning. 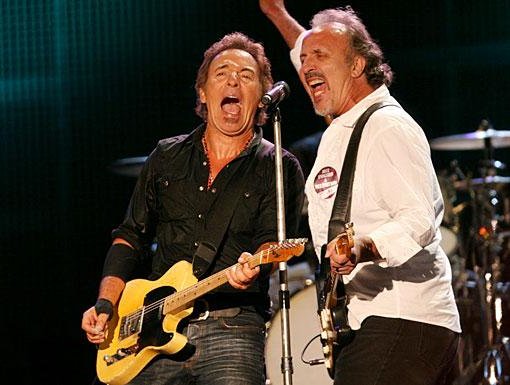 No, they never broke through to the mainstream, like their pal and not-so-secret admirer Bruce Springsteen. But if anyone just wanted to stay “local heroes” (and you actually believed them), it’s these humble, working-class no-frills rockers. Grushecky & Co. will be performing at the beautiful riverfront park in Aspinwall — there’s plenty of room, but get in line early for the sandwiches at Farmer x Baker, the former shipping container making food that’s well outside the box.