“Blue Slide Park” (2011) — produced in Pittsburgh at ID Labs and released on Rostrum Records — debuted at No. 1 on the Billboard charts, with 144,000 sales, making it the first independently-distributed debut album to top the chart since 1995. The album received some harsh reviews from critics, however, including a devastating 1.0 (out of 10) review from influential music tastemaker Pitchfork, calling Mac “mostly just a crushingly bland, more intolerable version of Wiz Khalifa.”

So Mac doubled down, working relentlessly on his craft, spending endless hours at ID Labs in Lawrenceville, then moving to L.A. and making connections with virtually everyone making cutting-edge hip hop: Kendrick Lamar, Vince Staples, Flying Lotus, Odd Future. He slowly learned the production side of things and how to play instruments like keyboards and guitar. 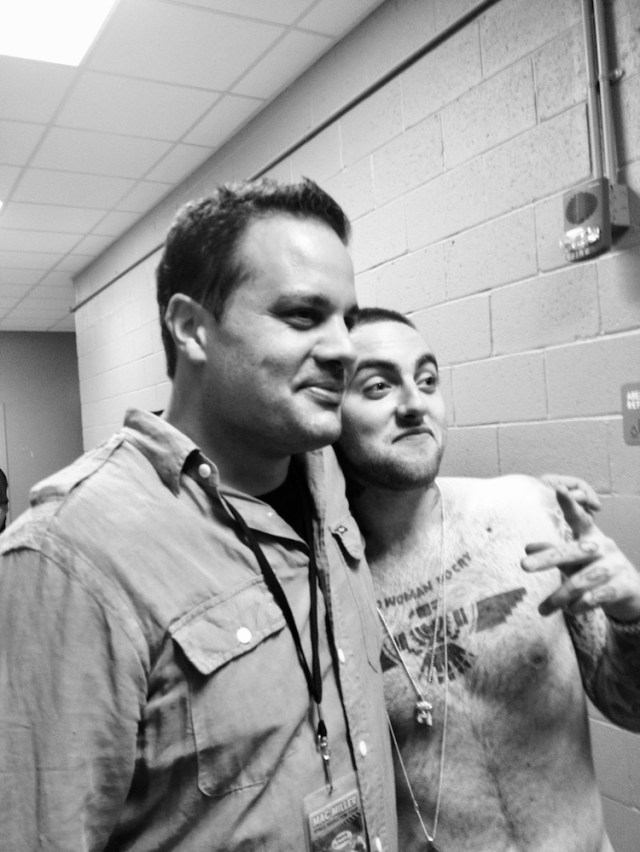 Miller’s rhymes got darker, deeper, weirder, more introspective and personal — and skillful. Even Pitchfork came around, giving his later records like “Watching Movies with the Sound Off” and “Faces” glowing reviews.

As he grew as an artist — whether it was the pressures of sudden fame or the emptiness of suddenly having all — the happy-go-lucky Mac of earlier years was gone, and darker forces were unleashed. Drugs and depression and premonitions of death became recurring themes that would haunt his later music — and in retrospect, are hard to hear. He was evolving rapidly, as a person and a musician, culminating in “The Divine Feminine” (2016), a complex meditation on love, intimacy and the distance between people.

“I think that it’s really so validating to hear someone experience what you’re experiencing, and you know, put words to feelings that you might not have the vocabulary for,” explains Chesman. “That was so important to me, and just seeing this person that I admire and respect … put the battery in my back in a way to be like, ‘OK, well, let’s start taking this seriously. Let’s go find a psychiatrist. Let’s start medication and let’s figure this out. Let’s really get to it, because you deserve more.’ It felt like the thing that Mac gave a lot of his fans was the sense that there was more to life than how bad you’re feeling.”

“I cried on the floor,” recalls Chesman. “I fell out of my chair when someone sent me the TMZ article (reporting his death). And I was just shocked. I was waiting for someone to tell me that it wasn’t true.”

Chesman found Mac’s collaborators willing, even excited, to talk — even Wiz Khalifa who isn’t easy to pin down for interviews.

“The one word that always kept coming up was he was ‘goofy,’ and was just a funny, happy guy,” says Chesman.” And I think that’s really what people wanted to emphasize — that he really lit up a room.”

Mac Miller mural on the North Side. Photo courtesy of Jeremy Raymer.

Chesman doesn’t bother to twist herself into knots trying to justify Mac’s more indefensible lyrics — and there are many — and she chides him occasionally for writing “childish” things. But oversized braggadocio is the coin of the realm in hip-hop, and she interprets most of his lyrics charitably.

She also touches on Miller’s references to his Jewish roots, a heritage she shares.

“‘Yahweh put the world in my hands; I’m giving it back’ (from the song ‘I Am Who I Am’) is my humanity in a single sentence,” writes Chesman. “The lyric is so multiple and procedural, the arc of my healing in one bar.”

There’s another book out about Mac Miller, “Most Dope: the Extraordinary Life of Mac Miller” by Paul Cantor, that has been vehemently opposed by Mac Miller’s family. Chesman’s book didn’t receive any opposition.

“The book was estate approved, but it’s not like they were there sitting over my shoulder as I wrote the book,” says Chesman. “They just kind of trusted me to do what I do.”