Aspinwall is having a moment right now, with a beautiful new riverfront park and some good new additions to its walkable main business district. This one does exactly what it says on the label. Fresh juices, smoothies and “shots” — like the Remedy Shot, with house-made elderberry syrup, apple cider vinegar, lime, orange and cinnamon, for boosting gut health — are a particular emphasis here. You can also get frozen bowls, like the Maple Fig with oat milk, berries, maple syrup and granola. For main dishes, there’s the Jack’d Bowl, with quinoa, avocado, heirloom tomatoes and jackfruit (a tropical fruit with a texture like shredded meat), with a maple-orange sauce. It’s also a coffee shop.

Viridis opened this past year, focusing on vegan breakfast and lunch and coffee. It has an adept hand at pastries, like a Cheddar, Chive and Green Onion Scone. In the past, it has had items like Matcha Pistachio Croissants and Glazed Brioche Doughnuts. The menu is small but fascinating — there is a Steak Wrap made with soy curl “steak,” gochujang aioli, greens, tomato, avocado and pickled red onion. There’s also a Biscuit Breakfast Sandwich with TVP (textured vegetable protein) sausage, vegan cheddar, tofu egg and maple butter on homemade biscuits. This place is also a first-rate coffee shop, serving drinks like a traditional Italian Macchiato.

You can find great food in very unexpected places — in this case, one of the best newish restaurants in Pittsburgh is in a shipping container by the Allegheny River in Aspinwall. Luckily, its arrival neatly coincided with the creation of Allegheny RiverTrail Park, with bike trails, a dog park, a playground and sometimes kayak rentals. It’s a beautiful setting for outdoor dining, with food that rises to the occasion. Just about everything is made from scratch from local farms, especially Farmer x Baker’s own Root & Heart Farm, that focuses on heirloom produce. Bagel sandwiches like the Veggie Beast or Goat Rodeo (with chèvre from the local Goat Rodeo dairy), a Breakfast Burrito and Farmer Frittata.

It’s not that hard to make bread without meat, obviously. But to make it 100% vegan, with no dairy or eggs at all, is a challenge. But owner Omar Abuhejleh decided to make the jump during the pandemic — and it’s honestly hard to tell the difference from Allegro’s original array of sourdough baguettes, Challah, Ciabatta, Brioche, croissants and cinnamon rolls. Another new thing is sandwiches, like the Seitan Melt, with the versatile roasted wheat gluten product providing the protein, and tomatoes, pickles and tahini sauce the flavor. There’s also a Hummus Sandwich with house-made hummus. Of course, this is Squirrel Hill, so they make a good Rugelach — a little crescent-shaped pastry rolled around a filling (apricot, raspberry or chocolate) and nuts — that originated Jewish communities in Poland. 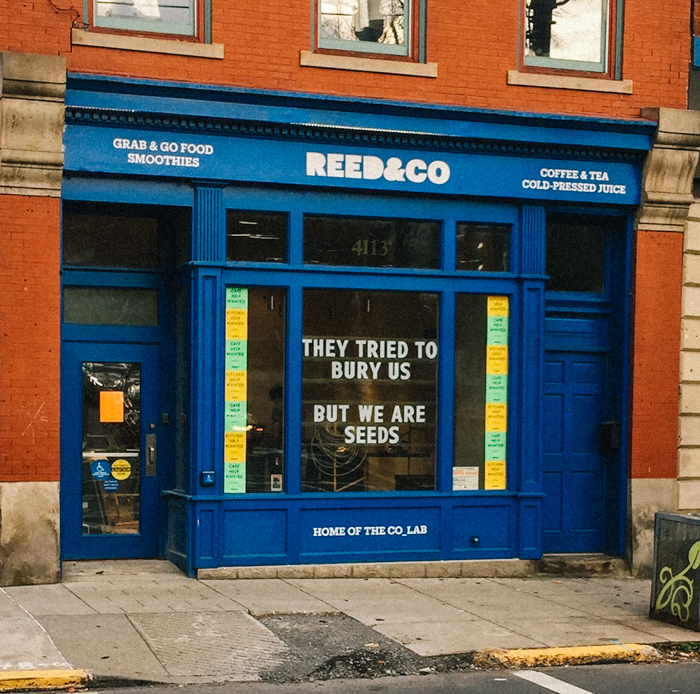 Much more than just a juice bar (though there is plenty of that), Reed & Co. also has a full menu of really unusual dishes, like a Buffalo Chik’n Sandwich with a breaded vegan patty and house buffalo sauce and a Kimchi Bagel, with crushed avocado on a bagel made by Spirit. There’s even the Impossible Hoagie — a sausage-style Impossible meat sub with pickles, onions, red pepper sauce and garlic aioli. Of course, you can get an Impossible Burger too, customized in four different concoctions. Reed also features grab-and-go cold dishes, like a Quinoa Hummus Bowl and the Beet Wave Salad with fire-roasted corn and vegan feta cheese. It has bottles of its juices to go, with include Super Citrus, Green Dream (pear, pineapple, cucumber, spinach) and Sweet Beet Red. Smoothies are blended with coconut water or almond milk. 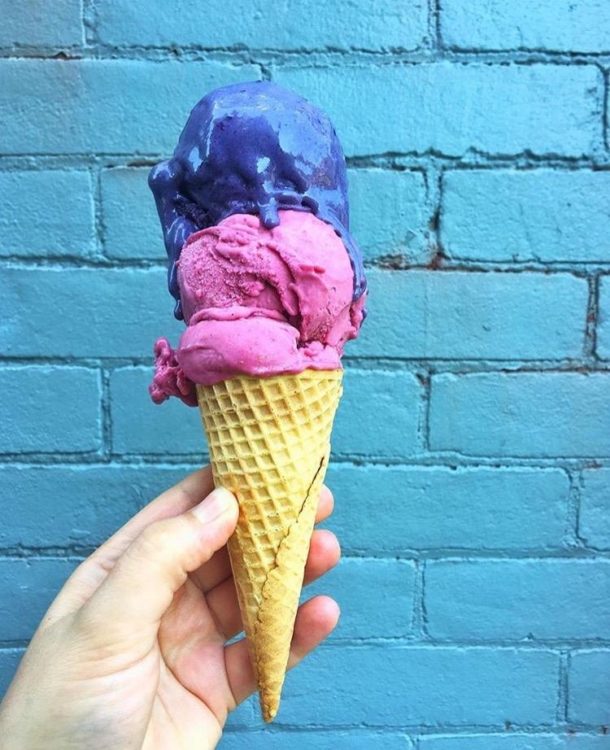 Say “Sugar Spell Scoops Sharpsburg” three times fast, and that’s the magic incantation to summon something really new: vegan ice cream. Sharpsburg is just about the last place you’d expect a vegan ice cream spot to land. But the weathered old industrial river town is experiencing its own rebirth, and new things are springing up everywhere. Sugar Spell Scoops works its magic with 100% vegan cashew-based ice cream. Flavors change all the time, but include things like Birthday Cake with cake batter and a rainbow buttercream swirl and Almond Butter Brownie, with chunks of Brandon’s Best gluten-free brownies. Sugar Spell doesn’t have regular hours at the moment, so check its Instagram page for openings, events (including VegFest) and pint pickups.

Hail the power of seitan! This flexible wheat gluten is a great meat substitute, and Spak Brothers knows how to cook it just right. It also figure out what to do with it: seitan wings, seitan cheesesteak, a seitan melt with Buffalo sauce, seitan on top of pizza. Spak can even make you a pizza with a vegan cheese. (Though the non-vegan cheese pizza is some of the best in town, so go for that if you do dairy.) Somewhat surprisingly, out in Bridgeville, Country Style Pizza has a great and vast menu of vegan pizzas, from Spinach Artichoke to Vegan BBQ.

There are a few regular pop-ups experimenting with all-vegan cuisines in the Pittsburgh area. These are a cheap way to get off the ground, get food into people’s mouths, see what works, and then launch into bigger things, like food trucks or restaurants. There’s Disfrutar which makes Mexican food without meat, which is no small feat. Disfrutar features Migas with a tofu scramble, Chorizo Con Papas with house-made soyrizo, and all kinds of tacos. ShadoBeni is another, as Ulric Joseph explores his native Trinidadian street food, popping up regularly at farmer’s markets in Squirrel Hill, Bloomfield and the North Side. Look for dishes like Pelau, with rice, carrots and pigeon peas simmered in coconut milk, and the sandwich-like Doubles, with curry channa (chickpeas) between to barrios (fried flat dough), and various chutneys, ranging from sweet, tangy tamarind to a cool cucumber sauce. There’s also Pure Grub, which appears at farmer’s markets in East Liberty, North Side and Squirrel Hill. Pure Grub’s offerings include Hoisen Stir Fry with brown rice and mixed veggies, Coconut and Chia Parfaits, and Spicy Japanese Sweet Potatoes with chili powder and garlic.

Valkyrie Doughnuts operates in several cities from a trailer — somewhat more than a pop-up and slightly less than a food truck. It is usually parked (but does move around) at 4903 Penn Ave. in Bloomfield/Garfield. These donuts are vegan, and wildly original, including a Burnt Almond doughnut topped with buttercream and toasted almond brittle, and Lemon doughnuts with vegan lemon curd drizzle and lemon icing.