Ma Rainey’s Black Bottom was just released on Netflix, which gives us reason to amend our list (started in 2017) of the best movies ever made in Pittsburgh. The movie is just that good.

We’ll also take the opportunity to increase this list to 16 films, in order, to add some more recent movies.

Ma Rainey’s Black Bottom is producer Denzel Washington’s second crack at filming a play from towering Pittsburgh playwright August Wilson, after Fences (2016), which was set and filmed in the Hill District.

For sheer Pittsburgh content (regardless of quality), it’s kind of hard to top Sudden Death (1995), which features a fight scene between Jean-Claude Van Damme and Iceburgh, the Penguins mascot, in the kitchen of the Civic Arena, using a deli meat slicer and a deep fryer as weapons (!).

Flashdance (1983) is another Pittsburgh classic — about a steelworker/stripper (!!), in a time-capsule-of-the-’80s sense. It was a massive hit, even though the critics hated it.

Picking the best movies made in Pittsburgh, though, is actually really tough. Even five years ago, it was easier. But the recent boom in Pittsburgh-made productions forced me to expand this list to 16.  Despite that, there were still a few star-studded, ambitious cinematic misfires that fell just short — Out of the Furnace (2013) and The Road (2009), in particular.

(I really wanted Out of the Furnace to be better. I was covering movies for the Pittsburgh Tribune-Review at the time and got to watch over Christian Bale’s shoulder as he aimed a rifle at Woody Harrelson coming out of a bar in Braddock. Harrelson later spotted me and asked that I be kicked off the set. He doesn’t like press, apparently).

As always, feel free to disagree, and add your own picks below.

16.) Happiest Season (2020): As a professional newspaper movie critic for many years (yes, that was once a real job — unbelievable, I know), I developed a sincere love for just about every genre of film imaginable: Japanese samurai flicks to French New Wave, to horror, to Westerns.  However, if I have one blind spot, it’s the formulaic romantic comedy. If I have two, it’s the formulaic Christmas movie. Happiest Season is both — and I still found it mildly enchanting. It’s the first such movie (I think) to feature a lesbian romance at its heart. Abby (Kristen Stewart) and Harper (Mackenzie Davis) make plans to leave the big city (looks like Lawrenceville) for Abby to meet Harper’s family for the first time, over Christmas.

On the road to Harper’s hometown, she breaks the news — her parents don’t know she’s “out” yet, and if Abby could play along, that would be great. Other things Abby has to discover include: her family is unnervingly perfect, Harper’s dad is running for mayor, her mother is obsessed with hosting the perfect Christmas, and her sister Sloane (Alison Brie) keeps a sibling rivalry simmering as they duke it out for limited rations of parental love. Daniel Levy shows up to help as a fairly stereotypical gay best friend, yet brings the same tightly-wound nervous energy that he brings to Schitt’s Creek, and steals every scene. Of course, it goes soft-hearted and Christmassy when it could go political (it’s assumed that Dad is a conservative politician), but that doesn’t mean it’s not effective in delivering the holiday goods.

15.) Wonder Boys (2000): Pitt grad and Pulitzer-winning novelist Michael Chabon based this novel in large part on his experiences at Pitt with the brilliant writing professor/novelist Chuck Kinder. The movie adaptation directed by Curtis Hanson was filmed largely at Carnegie Mellon. Michael Douglas is the professor, Grady Tripp, whose days as a boy wonder novelist seem to be slipping away, as he can’t seem to finish the long-awaited followup to his brilliant first book. His wife has just left him, and his affair with the chancellor (Frances McDormand) has taken an unexpected turn. He has two promising students who occupy his attention: James (Tobey Maguire), a moody, compulsive liar, aspiring novelist and apparent kleptomaniac, and Hannah (Katie Holmes) who rents a room from Tripp, and clearly has a crush on him. His  New York editor (Robert Downey Jr.) shows up for the literary festival — both of their careers depend on Tripp’s next book, clocking in at 2000+ pages, and nowhere near finished.

“Wonder Boys” has elements of a screwball comedy, though the pace is leisurely: there’s a stolen outfit Marilyn Monroe wore on her wedding day, a gun, a surprise pregnancy, sexual confusion, and a constant halo of weed smoke. For all the characters’ intellectual brilliance, the life of the mind takes a back seat to chaos, personal and professional. It’s about character more than plot, and ultimately about trying to be a good teacher even when your own life is falling apart.

14.) Adventureland (2009): Getting stuck in a lousy summer job is as close as middle-class American teens have to a rite of passage — whether it’s dragging body bag-sized golf bags around at the golf course, peddling gooey gobs of melting ice cream at the pool, or running the rigged games at the local amusement park. Adventureland (shot at Kennywood, which they actually had to try to make look rundown and crappy) successfully taps this near-limitless vein of comedy without trying too hard. It’s summer in 1987, and James (Jesse Eisenberg), a recent college grad, has to put his summer plans in Europe on hold when his parents’ money disappears.

He is forced to take the only summer job he’s qualified for — working the games at Adventureland. But amid the endless supply of puking children, sullen teens and inappropriately attired parents, he makes some friends and meets a girl (Kristen Stewart) who will make this summer more interesting than he had planned. It feels like a sweeter, less vulgar riff on familiar themes — young love, lust and a nerdy, thoughtful young man tantalized and tormented by the implausible proximity of the girl of his dreams. As a surprisingly nuanced take on the teen coming-of-age comedy, Adventureland is as welcome as a two-minute wait to ride on the Thunderbolt.

Me and Earl and the Dying Girl.

13). Me and Earl and the Dying Girl (2015): This subtly eccentric Sundance Film Festival-winning (Audience and Grand Jury Award) little movie was written by novelist Jesse Andrews, and it was literally shot in his parents’ house in Point Breeze. It’s a movie that gleefully toys with and subverts the expectations of the YA (Young Adult) genre that was all the rage at the time.

Greg (Thomas Mann) is content to stay unknown and aloof, along with his only friend, the mercurial, salt-of-the-earth Earl. They’re okay with social anonymity if they can be left to pursue their weird hobby — making endless homemade parodies of strange art films, like the tormented, existential warfare of Werner Herzog and Klaus Kinski. They particularly enjoy reducing classics of world cinema to absurdly goofy, pun-filled one-joke riffs. Then Greg’s mom guilt-trips him into visiting a girl with leukemia whom he barely knows. This is even more awkward than it appears, but a bond is formed that will change their short lives immeasurably. 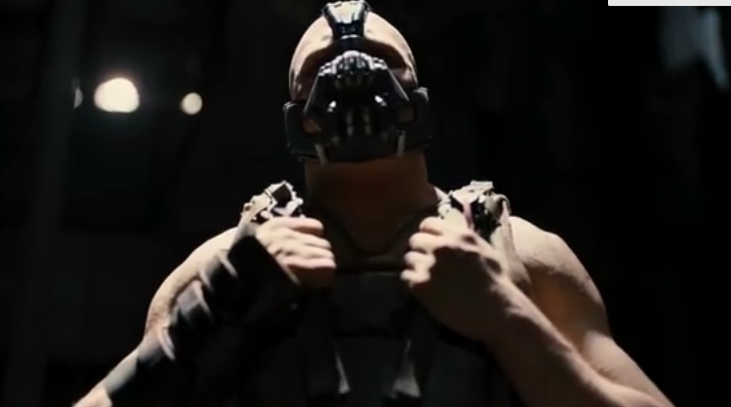 12). The Dark Knight Rises (2012): is certainly the biggest movie ever made in Pittsburgh, raking in more than a billion dollars worldwide. Compared to the first two chapters in Christopher Nolan’s Dark Knight (Batman) trilogy, it’s a lugubrious, murky slog, with the franchise’s least interesting villain (Tom Hardy tried, but it’s hard to act with your mouth covered). Still, there are a few action sequences here that are simply stunning, such as the apocalyptic destruction of Heinz Field on game day. And by this point, the onrushing doom of Nolan’s vision has its own unstoppable momentum.

11.) Lightning Over Braddock: A Rustbowl Fantasy (1988): There’s always been a strong undercurrent of experimental cinema in Pittsburgh, going back to the ‘60s. To single out one superb example, there’s Tony Buba’s sublimely weird Lightning Over Braddock. It’s about both the economic implosion of a working-class steel town paradise, and some goofball local character named Sal, who periodically hijacks the whole movie, steering it towards his own esoteric, self-aggrandizing ends. You’ll never see another movie like it. 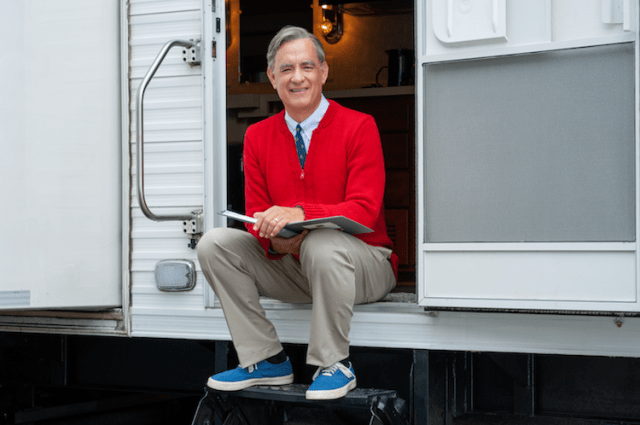 Tom Hanks portraying one of America’s most cherished icons, Mister Rogers, on the set of TriStar Pictures’ A Beautiful Day in the Neighborhood. Photo by Lacey Terrell used by permission from Sony Pictures/Tristar.

10.) It’s a Beautiful Day in the Neighborhood (2019): “Please don’t ruin my childhood,” pleads Andrea Vogel, to her husband Lloyd (Matthew Rhys), a tough investigative journalist assigned to profile Mister Rogers, to his dismay. We’re all asking the same thing.

Thankfully, it doesn’t. This is a movie that should struggle for a reason to exist — the documentary “Won’t You Be My Neighbor?” (2018) already says everything there is to say about the radical kindness and creative genius for television of Fred Rogers. Still, if there’s anyone in the world with the empathy and light touch with weighty material necessary, it’s Tom Hanks — and he threads the needle here. Strangely, though, Mister Rogers is almost a supporting character in this film, which revolves around Rhys, who plays a broken man navigating new fatherhood while (poorly) handling the reappearance of his estranged father — when he receives this peculiar new assignment. Rhys is an actor who carries deep reservoirs of sadness, and his inevitable, gentle Fred-inspired catharsis doesn’t come cheaply.

Ezra Miller and Emma Watson in The Perks of Being a Wallflower.

9.) The Perks of Being a Wallflower (2012): In the social hierarchy of high school, being a wallflower — the shy, observant sort — is only slightly above hall monitors and kids crammed into lockers. But for freshman Charlie (Logan Lerman), there are some perks, like being adopted by an older clique of worldly misfits, including a girl who was a wizard in a past life (Emma Watson of “Harry Potter”). Somehow, of the three great coming-of-age novels of Pittsburgh adolescence, the best book, Michael Chabon’s The Mysteries of Pittsburgh, made the worst movie. The second-best book, Jesse Andrews’ brilliant and underrated Me and Earl and the Dying Girl, made a very good movie. However, Stephen Chbosky’s Perks made the best movie, through nuanced, graceful performances from its leads. 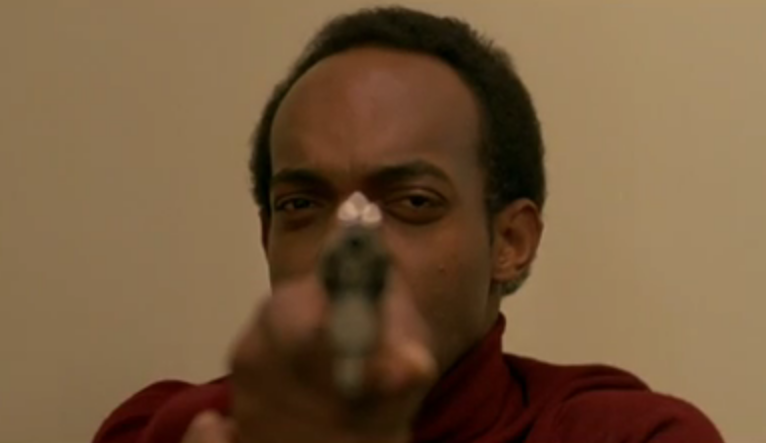 8.) Dawn of the Dead (1978): The legendary first sequel to Night of the Living Dead has some surprisingly sharp satire of modern consumer culture buried beneath the endless severed limbs and decapitated heads. A few lonely survivors try to ride out the apocalypse holed up in Monroeville Mall, while the undead return to wander endlessly, aimlessly — not that much different than when they were alive, actually. Who knew the world would end not with a bang or a whimper, but with an all-you-can-eat buffet (of humans) at the mall?