Is this place even open? Is it ever open? I can never wake up early enough to get donuts here — they make a certain number, sell them, and then close for the day. But I’ve tasted enough of them brought to various offices by saintly coworkers to pass judgment — and these are the best in the city. On par with Oram’s in Beaver Falls and Duck Donuts in the South Hills, the donuts here have a thick, substantial exterior with a soft cake interior, and classic flavors such as chocolate-glazed, cinnamon and jelly-filled. The shop looks nearly abandoned except for those frequent and early lines of people out front. Set your alarm. 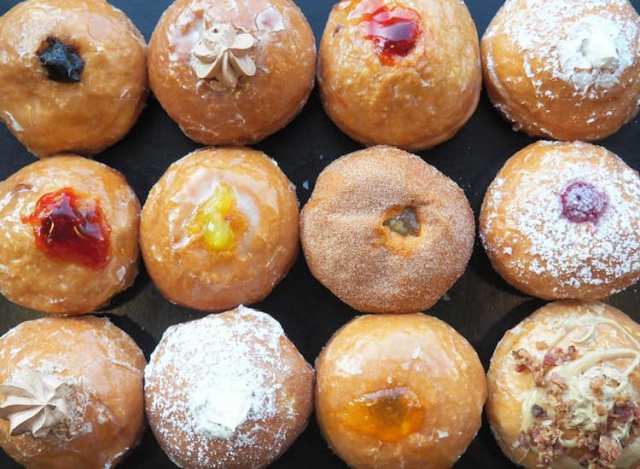 This beloved neighborhood bakery has grown into a massive new industrial-sized operation, but they’re always well-staffed, managing to serve enormous amounts of incredible baked goods to innumerable happy customers very quickly. Just take a number and listen for it while you browse the baked goods.  Known best for their cakes and paczki (which are pretty much Polish donuts), this place also cranks out an amazing array of delicious donuts, as well as cakes, cookies and other pastries in just about every possible configuration.

Okay, so these guys definitely don’t need more attention — they had their own reality TV show, “Farm Kings,” for crying out loud — but we’ve made this stop on occasion, and it’s worth it. They feature both raised donuts (the classic formula, where most of the flavor is typically in the glaze), and cake donuts (made with batter, which can supply its own flavors). Raised Glazed or Raised Iced Sprinkle is a good place to start here, or Chocolate Cake Glazed if that’s the way you like it. The Apple Fritters are also excellent, as are the Raised Chocolate Iced M&Ms, which come close to being too much, but not quite.

Now, that’s a name for a donut shop. Big Daddy sounds like a dude who knows something about donuts. This oddly-shaped building with its sloping triangular roof is easy to miss, but inside it’s warm and inviting. There’s a nice mix of tastes here, which include Blueberry, Powdered Cinnamon, Cookies & Cream, Chocolate Cake, German Chocolate. Diner-type stools and tables give you the opportunity to devour a box right on the spot, should that become necessary (and it might).

This is a nice little family-owned neighborhood bakery that’s been serving Homewood sweet treats for more than 40 years. It’s a slim, bare-bones storefront, but filled with warmth radiating from the ebullient owner, Joe, who named the shop for his daughter. They feature both raised and cake donuts, Custard-filled, Danish rolls, Coconut, Cinnamon, Maple, Glazed, and a few others. The donuts don’t look like much, but are shockingly delicious — surprisingly light and stopping just short of being overpoweringly sweet. And they have the best prices in town. Dana’s also has cookies, pies and cupcakes.

Here’s a just-opened favorite from the beach resort of Geneva-on-the-Lake, Ohio, brought to town by a super-fan. The raised dough Cream Sticks filled with their signature marshmallow-based cream and topped with chocolate are clearly the right place to start here. But they can execute a perfectly light and sweet classic Glazed raised donut as well.

Got a favorite donut place we missed? Let us know here!