At the beginning of 2020, Pittsburgh was poised for a construction boom.

Then the pandemic hit.

Now, as developers pick up the pieces and construction resumes in some places, we thought it would be a good time to check in on the biggest projects in the region to see where things stand or don’t. 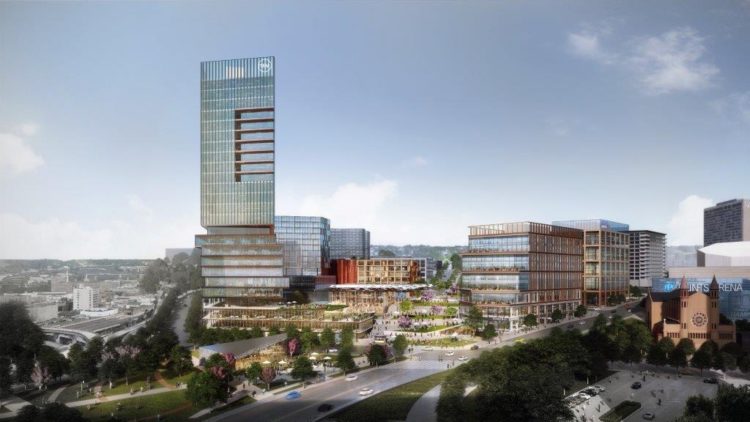 This ocean of asphalt, this dead sea of parking lots since the days of the Civic Arena, may finally be on its way to a higher purpose and a better use. After years of difficult negotiations between the neighborhood, the Penguins and city government, what could amount to a billion dollars in development is planned for this 28-acre spot between Downtown and the Hill District. This includes a 26-story office tower for the headquarters of First National Bank, with ground-floor retail, planned for the lower end of the arena site, nearest Downtown. Three hundred apartments are planned for the first phase, with eventually up to 1,420 on the site. Live Nation will open a 90,000-square-foot, 6,600-seat music venue, and Punch Bowl Social (which is closed throughout the country due to the pandemic) is planned for a later phase. According to the URA, the Hill District will receive $11 million in investments to fund housing and economic development in the neighborhood.

The development was originally planned to start this summer. “It’s certainly moving forward,” says Boris Kaplan, vice president of development with Buccini/Pollin Group. “The redevelopment of the 28 acres across from PPG Paints Arena seems closer to a groundbreaking than it’s ever been. It’s going to take one final big push from business, community and public sector leaders to get the first phase projects out of the ground. That’s not going to happen in 2020; it’ll happen in early 2021.” 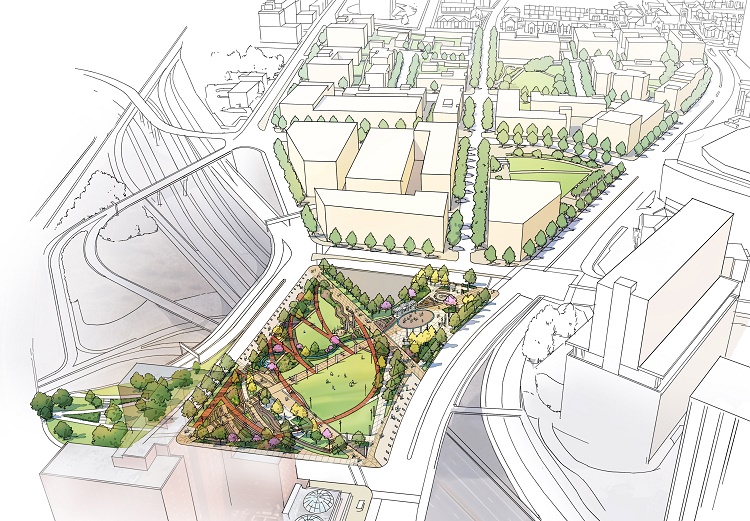 Perspective drawing of the green space within the Lower Hill District development area. Rendering courtesy of the Sports & Exhibition Authority.

Nearby, I-579 is currently getting “capped” with a three-acre, park-like bridge, creating the kind of pedestrian-friendly connection between the Hill and Downtown that has been absent since the construction of the Civic Arena. It will feature walking and biking paths, work by local artists and rain gardens. The $30 million project has stayed on schedule during the pandemic. The Lower Hill, at long last, may slowly be on its way to becoming a neighborhood again.

Rendering of the Roundhouse plan at Hazelwood Green by GBBN.

After an eight-week delay due to COVID-19, Hazelwood Green is moving forward. The biggest solar installation in the country is underway, on the roof of Mill 19, a massive remnant of the LTV Steel complex that used to dominate this site. Now, after more than a decade of painstaking soil remediation — this land was quite polluted — and planning, Hazelwood Green is coming to life. Mill 19 is being repurposed as high-tech office and workshop space, and home to the Carnegie Mellon University-led Advanced Robotics for Manufacturing Institute and Manufacturing Futures Initiative.

Hazelwood Green now has Pittsburgh’s first Complete Streets roadway — designed for bicyclists, pedestrians, motorists and transit users alike — that’s open to the public. Eventually, a 1.9-mile pedestrian and bike trail, a riverfront park, a public plaza and millions of square feet of housing and office space will fill this 178-acre site. The Plaza is almost complete, and the two-acre space will open in November to the public. It includes lush green lawns and 16,000 square feet of granite, with the slabs forming slanted sheets over which water will gently flow into a basin.

The Roundhouse, one of the site’s original structures, is being stabilized and renovated. The foundation for the second floor is being poured in late summer and early fall. The brick walls and interior bridge crane will be restored, and open space with gardens are planned. In the second quarter of 2021, GSVlabs (Global Silicon Valley Labs) will make the Roundhouse their newest innovation hub.

The entire project will be designed to environmental LEED for Neighborhood Development standards. Native trees, plants and flowers — chosen for their ability to attract bees, hummingbirds and other pollinators — are being planted throughout Hazelwood Green. The canopy trees (Lindens, Catalpas) framing the Plaza are being planted as an experiment to test how vegetation can mitigate air pollution and trap particulate matter. The master planning process for the 1.3-mile riverfront part of Hazelwood Green has just begun, and aims to connect the neighborhood of Hazelwood to the river.

The one development on our list outside city limits, Pittsburgh International Airport plans to go from an outmoded hub for long-departed US Airways to an upgraded facility designed for current needs, at a total price tag of $1.1 billion. The existing landside terminal will be demolished, and the people mover will be eliminated.

The groundbreaking was supposed to occur in April, but has been pushed back indefinitely. However, the design team is currently evaluating ideas to adapt to the pandemic, like air quality monitors, voice-activated elevators and contactless delivery of luggage to your home or hotel. Construction has begun on a microgrid with solar power to provide energy for the airport and function completely apart from the electrical grid.

Nearby, the Pittsburgh Airport Innovation campus will also get off the ground in the next few years as part of a partnership with the University of Pittsburgh and industry players like Arencibia. The complex will focus on attracting additive manufacturing (3D printing) companies and will include 1.4 million square feet of office and manufacturing space.

The Highline. Photo by Stephan Bontrager of Riverlife.

In 1906, this enormous 868,000-square-foot warehouse complex was built to be the biggest, most efficient shipping hub between New York City and Chicago. Now, it’s being remade into industrial-style office space, with an elevated green space headed toward the river, giving it the name The Highline  (yes, it’s named after the famous elevated railway-turned-park in Manhattan). This has just opened to the public, offering some terrific views of the Liberty Bridge and Downtown Pittsburgh, with another public plaza below on ground level. A retail component is coming along as well, including a bike shop and the Sly Fox Brewing Co., opening this fall. The project’s estimated cost is $100 million. Nearby, the $70 million Glasshouse project has been completed, bringing 320 apartments to a former parking lot near Station Square. 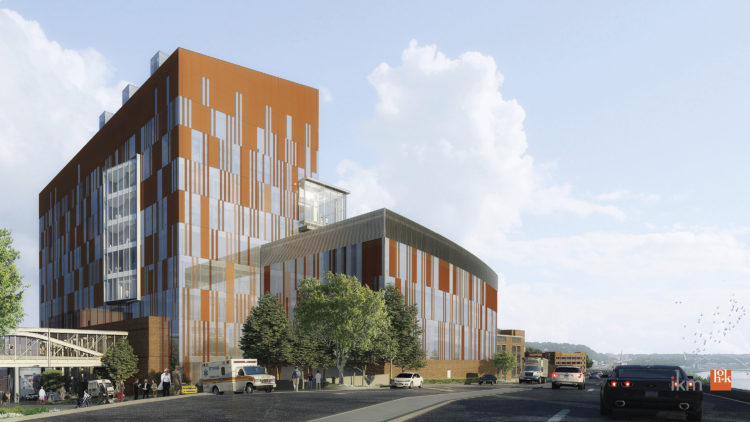 Part of a $2 billion investment in citywide hospital construction by UPMC, the Uptown site adjacent to UPMC Mercy will be devoted to ophthalmologic research and vision restoration and rehabilitation. It will be run by José-Alain Sahel, a world-renowned scientist hired from the prestigious Vision Institute in Paris. This 445,000-square-foot building will have parking for 1,100 vehicles, and is on schedule to be completed in December 2022. A heart and transplant hospital in Oakland and a cancer-focused hospital in Shadyside are also planned, but those are still in the design and development phases.

The Strip District Terminal under renovation. Photo by TH Carlisle for NEXTpittsburgh.

It was once the beating heart of the Strip District, when this neighborhood was the region’s main wholesale food distributor. Now, after years of contentious plans and false starts, the vast, five-block Produce Terminal, built in 1926, is being redeveloped by McCaffery Interests. The $62 million mixed-use complex will include office space, restaurants and retail.

Dan McCaffery, CEO of McCaffery Interests, told NEXTpittsburgh that the Terminal will be complete in weeks, but tenant spaces will take a bit longer to build out. Tenants for the 163,500 square feet of commercial space are going to be announced very soon, and McCaffery says that the space is about 40-50% leased. They are pursuing a mix of restaurants, brewpubs and “eatertainment.” A Fine Wine & Good Spirits Premium Collection store was the first to sign on. An initial attempt at a food market on the western end has fallen through, however.

At the eastern end, office space is a possibility for the second floor. The redevelopment includes murals created by Pittsburgh artist Brian Holderman that pay homage to the Strip’s grocers, produce stands and street vendors. Pathways through the building will connect the Strip to the river and riverfront trail in a way that the structure has long prevented.

Across the street, McCaffery is transforming the upper floors of 1600 Smallman into high-tech office space and likely ground-floor retail. So far, this has attracted the self-driving car company Aurora Innovation as the main tenant. The developer recently picked up a nearby plot of land located across the street from St. Stanislaus Kostka Church that will remain parking for the time being.

Oakland is the nerve center of Pittsburgh’s medical and technology sectors, though it’s long dealt with the issue of being short on space. This challenge is being met by going vertical. Walnut Capital’s 280,000-square-foot Innovation Research Tower will rise 10 stories above Fifth Avenue, across from Carlow University. It will be designed to house offices and laboratory research space for tech firms, universities and hospitals. There will also be room for retail space, some of which will be dedicated to community-focused tenants managed by the Oakland Planning and Development Corporation. A group of unremarkable low-rise offices on the site has just been demolished, so construction is beginning now. It’s expected to be completed by the summer of 2022.

If you’re looking for one thing to symbolize the transformation that Pittsburgh is undergoing right now, Bakery Square is probably it. The former Nabisco factory is home to Google and a host of tech firms and university-related research entities. It stretches across Penn Avenue via a pedestrian sky bridge to the site of the former Reizenstein school.

On that side of Penn Avenue, the 320,000-square-foot Bakery Office Three project is scheduled to be finished by October. The site will house 1,500-plus workers for Philips Sleep and Respiratory Care, which is moving to the city from suburban Murrysville in January. The retail side is getting a facelift with Bakery Square Refresh 2020, an effort to add two stories of restaurant space, an improved indoor/outdoor atmosphere for pedestrians, and a change from its current auto-centric orientation. This is now under construction. 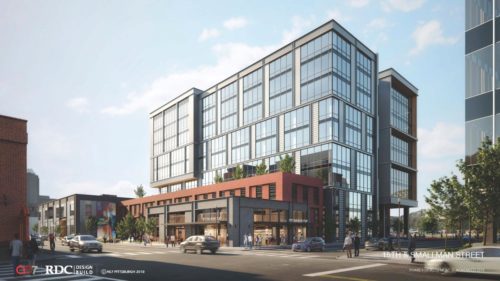 A rendering showing The Vision on Fifteenth at the corner of 15th and Smallman streets. Rendering courtesy of RDC.

The Vision on Fifteenth, Strip District. Status: under construction

Self-driving cars are becoming almost as common as human-driven ones on Strip District streets. The Strip’s Robotics Row continues to act as a massive magnet for former suburban Pittsburgh offices (Bombardier, Honeywell), overseas tech firms (Bosch), fast-growing startups (Petuum, Argo AI) and Silicon Valley giants (Uber, Apple). Even bigger developments, like 3 Crossings along the river, and a 21-story office tower at the old Wholey’s cold storage building, are in the works.

To pick just one for the near future, The Vision on Fifteenth building could have a major impact. The property next door, District 15 , attracted Facebook, which occupies the entire space. Hopes are equally high for this nine-story, 260,000-square-foot building, which should better link Downtown and the Strip District by replacing the current dead zone of parking lots. The design is a big improvement on the first rather suburban-looking building, with a flexible retail/restaurant space activating the ground level. Construction is underway and never actually stopped during the pandemic. 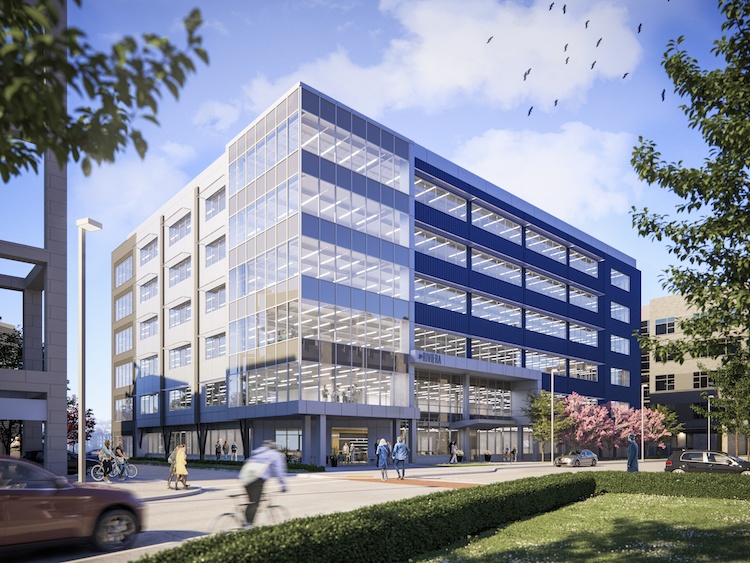 Riviera. Rendering courtesy of NEXT Architecture.

This long, narrow stretch of flat land sandwiched between 376 and the Monongahela River was one of the first major brownfield sites redeveloped in the city — and is reaching its built-out conclusion. A large, 160,000-square-foot office building fronting the river, The Riviera is now finished and ready for leasing. The University of Pittsburgh’s School of Medicine and BlueSphere Bio will be a tenants. Two more buildings are planned along Second Avenue — as part of the Elmhurst Innovation Center — aimed at housing emerging robotics and advanced manufacturing companies in need of office and high-bay manufacturing space. Construction has not started yet on this project.