During the Pirates’ epic streak of 20 straight losing seasons (most of any team, in any major American sport!), I used to say, “Just give me one meaningful week in August, where the Pirates are playing for something …anything.”

Then, like a miracle, we had the brief moment of August competitive glory in the mid-2010s: Andrew McCutchen, Gerrit Cole, Pedro Alvarez knocking the ball into the Allegheny, Reds ace Johnny Cueto dropping the ball after an entire PNC Park taunted him in an actual playoff game. It was great.

Then, it was gone.

Now, we’re deep into a rebuilding phase where everyone remotely talented is purged from the team in favor of guys who might be good in five years. Seriously, this team is as bad as any during the 20 straight years of disaster (and I remember the dark Derek Bell days).

At least this year, the Buccos did end my personal streak of witnessing 12 straight losing games in person, when they eked out a 1-0 win a few weeks ago behind a sterling pitching performance by veteran pitcher José Quintana (who was promptly traded to the Cardinals).

Luckily, there is such a thing as competitive August baseball in Western Pennsylvania. You just have to go looking for it.

A team from London in the PONY League World Series.

Did you know that the PONY in PONY League Baseball stands for “Protect Our Nation’s Youth?!” That’s kind of weird, right? Well, it is safer than football …

PONY League youth baseball teams include 500,000 players in 40 countries — and it all started out at the Washington YMCA in 1951. That’s still where it’s headquartered, and where the PONY League World Series is held. The 2022 tournament will feature 10 teams from around the world. These are 13-14-year-old players, which is a great age for baseball — you’ll find kids who still look like they have baby teeth and kids with mustaches on the same team! This year features teams from Johnstown; Hagerstown, Maryland; Palmview, Texas; Chinese Taipei; Puerto Rico; Monterrey, Mexico; our own Washington and even London.

A team from Chinese Taipei in the PONY League World Series.

PONY League age divisions are all named after horses, which is funny and kinda cute. The 3-4-year-old players are Foals, 5-6-year-old kids are in the Shetland division, then Pinto, Mustang, Bronco, Pony, Colt, Palomino and finally “Thorobred” (23 and up). Most of the other divisions already have played their World Series in different parts of the country.

Photo courtesy of the Altoona Curve.

So these are the Pittsburgh Pirates of the future (it’s the AA farm team). When you have a lot of losing seasons (like the Pirates), the consolation prize is that you get a lot of high draft picks, which should be your stars of the future. That’s how it’s supposed to work, at least.

Though the Pirates will continue to call up players from the farm system throughout September, you will still find the greatest concentration of future Buccos in Altoona. (The Indianapolis Indians are the Pirates Triple-A affiliate).

Mega-talented, freak-of-nature shortstop Oneil Cruz moved from Altoona to the big leagues recently. However, the Curve still has Quinn Priester, their main pitching prospect. Second baseman Nick Gonzales, one of the prospects at second base, plays here; Speedy Liover Peguero is another one to watch.

Plus, if you’re in Altoona, you’re practically required to stock up on bulk Mallo Cups at the Boyer factory, see the actual Altoona Curve (a train track cut through the mountains) and check out the world’s oldest roller coaster, Leap-the-Dips (1901) at the surprisingly cheap Lakemont Park.

Photo courtesy of the Erie SeaWolves.

Setting aside the fact that Lake Erie is not in fact a Sea (it’s … a … lake), and any wolves that happen to be in the sea are probably drowning, this is a very good minor league team (Double-A affiliate of the Detroit Tigers), with a fantastic ballpark in a surprisingly vibrant downtown Erie.

The most exciting baseball game on any level that I saw this year was an overtime SeaWolves loss to the Akron RubberDucks (another nearby team packed with talent bound for the majors). It was also “Star Wars” night (gimme your best Wookie sounds) with fireworks after the game.

Plus, you can get a Smith’s hot dog (Erie-made, the best) and Southern Tier beer for what a tray of nachos would cost at a big league game.

Though I’ve actually only been here to see Willie Nelson and Bob Dylan, Wild Things Park is a pleasant place as any to watch a game. The Wild Things (whose mascot is some sort of lion-like critter) are a pro team in the independent Frontier League, which usually collects its team from undrafted college players and one-time prospects that have been released by their teams. Players don’t make much money and often live with local host families during the season.

Teams at this level appear and vanish all the time. The Frontier League has some of the best (and worst) team names and logos ever: the London Werewolves, the Normal CornBelters, West Virginia Coal Sox and the Traverse City Beach Bums (all now defunct).

Fall ball starts soon, and nine out of 10 of the best games I saw all year so far were Little League games (my son plays). These kids have so much fun — making up nonsensical chants, beaming after every hit, seeing who can stuff the most Big League Chew bubble gum in their faces. And the parents and coaches, for the most part (at least in my experience) just let them play. Yes, I know at some point, and in some places, parents and coaches go crazy and ruin the game for everyone. But that’s actually pretty rare, in my experience. 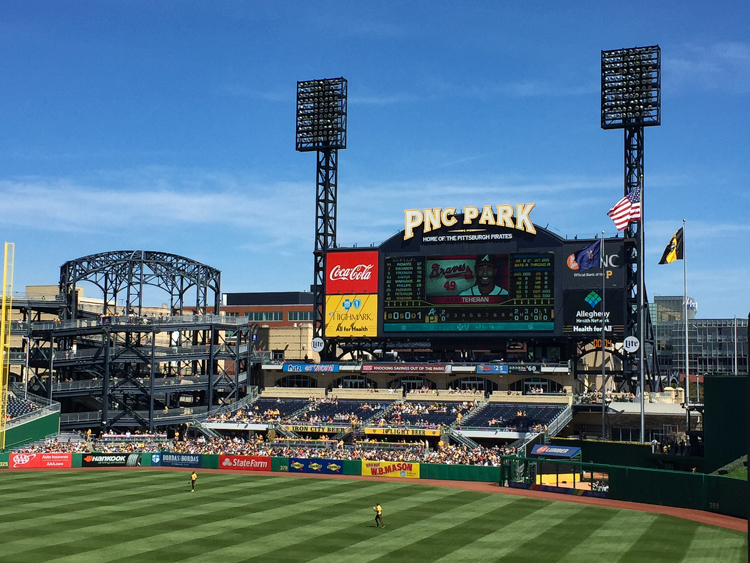 So this was supposed to be about competitive baseball in August, and this Pirate ship is so full of holes that it will sink to the rocky bottom of the Allegheny River no matter how they trim the sails. But they do actually play plenty of good teams coming up: the Boston Red Sox, Atlanta Braves, Philadelphia Phillies, Milwaukee Brewers (boo).

Plus, if you remove your eyepatch and squint a little, you can see the dim outline of a future team that could compete someday. There’s the team’s lone solid hitter, Bryan Reynolds, who miraculously didn’t get traded at the deadline. There’s Ke’Bryan Hayes at third base, who has all the talent he needs to anchor a future respectable infield. Then there’s the freakish, NBA power forward-sized (6”7′) shortstop Oneil Cruz, whose combination of absurd speed and strength puts him in a category all his own.

We’re not even asking for the impossible here. Not a World Series title — just competitive games that matter in August. A shot at a Wild Card. A team that others look at with trepidation on the schedule. We can have that, right?