It’s not rocket science; they’re leaving that to others.

This is a challenge of a different sort: make a moon rover small enough and light enough to go into space aboard Astrobotic Technology’s Peregrine lander — yet tough enough to withstand the rigors of landing on the moon.

Now, the Carnegie Mellon University students are done and Iris is ready to go up.

Next year, the 4-pound, shoe-box-sized rover will become the first American robot to drive on the moon. It’s also the first moon rover developed by students.

It’s packed with cameras to guide it and observe the moon’s terrain. But it has some strange properties as well. For example, its wheels aren’t even strong enough to carry its weight on Earth. But with the lighter gravity on the moon, that won’t be an issue.

“We actually used carbon fibers (instead of metals) — a 3-D printed carbon fiber chassis,” says Raewyn Duvall, program manager for Iris, and a Ph.D. student in electrical and computer engineering at Carnegie Mellon University. “It’s very lightweight, very thin and very strong in its own right. We’ve been down to the wire in terms of grams (of weight) that we can save.”

CMU’s unique blend of talents made Iris possible. One of the key mission control leaders is a drama major.

“This success is a testament to the more than 200 CMU students who worked on Iris over the span of three years,” says Red Whittaker, Fredkin Professor of Robotics and director of the Field Robotics Center at CMU. “The initiative is a pinnacle of human achievement as much as it is a masterwork of technical virtuosity.”

Weight was the major issue. But Iris also had to be tough — ready for almost unimaginably brutal conditions. The team at CMU spent much of their time testing the little rover, again and again. 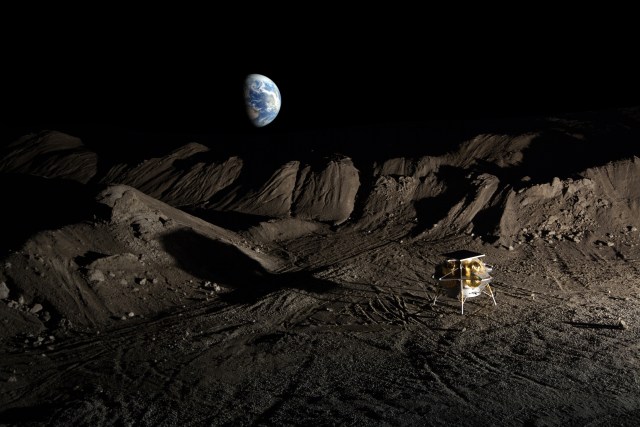 Thermal testing involved putting Iris in a giant chamber that could be cooled down to -60 degrees Celsius (-76 Fahrenheit) to simulate temperatures in space. Then, they heated it up to 60 Celsius (140 degrees Fahrenheit). All the while, they ran the rover and looked for a “heartbeat” that showed its electronics were working correctly. Other tests subjected the little bot to harsh vibrations and slammed large objects on it to simulate the shock of a hard landing. It was also hit with electronic “noise” to test its communications equipment.

Iris more than met the challenge.

“We never actually had any of those tests result in a failure — that we needed to do a complete redesign for — which was both lucky, and a testament to those designs,” says Duvall.

The space exploration and lunar logistics company Astrobotic was co-founded by Whittaker — one of the few giants in the field of robotics — in 2007. The North Side-based company is opening up a part of its new headquarters to the public as The Moonshot Museum to help inspire new generations to get involved in the growing space-tech industry here in Pittsburgh.

Duvall, originally from Chattanooga, worked for NASA before coming to CMU for her master’s degree.

“I was just going to be here for a year, but really fell into this project specifically,” she says. “And working with Red. So when he offered me the opportunity to be a Ph.D. student, I couldn’t turn it down.”

The rocket carrying the Peregrine lander and Iris rover will take off in mid-2022. It’s going up on a Vulcan Centaur rocket from United Launch Alliance, a Colorado-based space rocket manufacturer.

Iris is just one of 18 payloads that Astrobotic’s Peregrine is delivering to the Moon. It’s also sending another one from CMU called MoonArk.

It’s a fascinatingly complex, beautiful object sculpted from titanium, platinum and sapphire, that weighs only 8 ounces.

“It contains hundreds of images, poems, music, nano-objects, mechanisms, and earthly samples intertwined through complex narratives that blur the boundaries between worlds seen and unseen,” notes the project’s online description. “It is designed to direct our attention from the Earth outward, into the cosmos and beyond and reflect back to Earth as an endless dialogue that speaks to our context within the universe.”

“Impossibly small, broadly diverse, hyper-light, yet incredibly enduring, the MoonArk is designed and engineered to last thousands of years to project humanity in a most beautiful and highly significant way.”