Here’s one problem: With the Pittsburgh Cultural District’s events all dark, and many office staff working from home, Downtown’s restaurants have been hit harder than most by the Covid pandemic.

And here’s another: There’s a growing epidemic of food insecurity everywhere.

The Community Takeout program is a plan to address both problems at once — to generate business for some of these restaurants by buying meals and delivering them to people in need. This effort follows the first successful venture called DoublePlay which included restaurants from all over the city (like DiAnoia’s Eatery and Bae Bae’s Kitchen) in May.

At the center of the project is 412 Food Rescue — the Pittsburgh-based nonprofit that uses an app to divert excess food bound for landfills to people in need. Used by an army of local volunteers, the innovative app recently won Fast Company’s World Changing Ideas Award.

“No one else has the transport network that we have — we are truly the DoorDash for those who are food insecure,” says Leah Lizarondo, CEO of 412 Food Rescue. “We are able to bring food directly to where people are.” 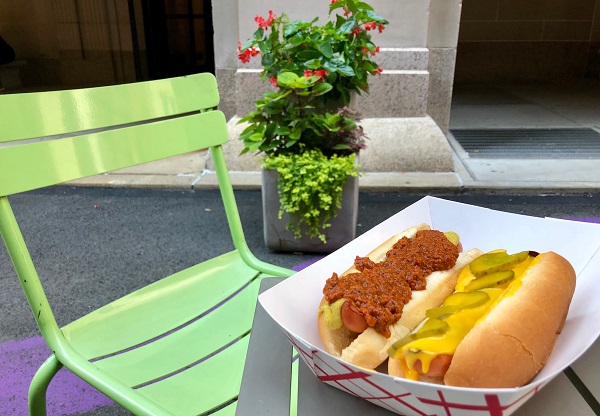 “This was inspired by a longtime supporter of ours, Dr. Mark Baratz, who at the beginning of the pandemic, bought food from minority-owned and independent restaurants and donated the food to us for distribution,” says Lizarondo. “He called it Double Play, because it not only generated much-needed revenue for the restaurants, the food they produced helped us deliver food to those who are experiencing hunger.”

In mid-January 2021, the project will expand to include more restaurants. Community Takeout will continue to provide meals through May, when outdoor dining should be able to resume. The Richard King Mellon Foundation supplied funds for the project — approximately $10,000 per week to help restaurants cover the cost of supplies and pay employees.

The first round of Community Takeout started in May 2020 and served 15,000 restaurant meals to people in need. The program also raised $30,000 for the Pittsburgh Restaurant Workers Aid Fund.

“Seven of the eight restaurants we supported weathered lockdown and we hope for similar success with this new iteration,” says Lizarondo. “Restaurants are such important spaces for connection and community, and we are committed to supporting the service industry workers who make those experiences possible.”

There will also be some delivery to people stuck at home — 412 Food Rescue started home delivery in the spring to deliver food to elderly residents and other vulnerable populations who are homebound.

“The number of households experiencing food insecurity has almost doubled in this pandemic,” says Lizarondo.

The community has really shown up to help, however.

“The rise in the number of downloads — hence, the number of volunteer drivers — has been equally unparalleled in this pandemic,” adds Lizarondo. “People are really stepping up and it has allowed us to distribute as much food in one year as we have in the previous years combined.”

According to the Pittsburgh Downtown Partnership, 50,000 meals will be served in the next six months, generating more than $425,000 in economic impact.

Individuals interested in donating can visit DowntownPittsburgh.com/Donate, or donate directly through GoFundMe at charity.gofundme.com/downtown-community-takeout.

412 Food Rescue started in 2015. Their goal is to be in 100 cities by 2030. Currently, they are in Vancouver, Cleveland, Manassas, Philadelphia, San Francisco and Los Angeles.