The dramatic and traumatic demise of Big Steel in Pittsburgh left some assuming that manufacturing was dead and the region’s future was dependent on high-tech jobs. That was only half-right.

New Century Careers on the South Side is a nonprofit that trains the next generation of manufacturing workers, whether they’re making steel or robots. And the training is free.

There are actually lots of jobs open in manufacturing right now, and there will be more as older generations retire. Catalyst Connection’s Manufacturing Employment Demand Study projects that 30,000 manufacturing jobs may need to be filled in southwestern Pennsylvania in the next 10 years.

Since October is Manufacturing Month, we discussed the state of the industry with Neil Ashbaugh, president and CEO of New Century Careers.

“The trend in America was ‘college, college, college,’” says Ashbaugh. “Our society really twisted everything to a college-only mentality. We rewarded our high schools for sending kids only to college. And that created a shortfall of kids who should have probably been sent to manufacturing.”

For more than two decades, the nonprofit has helped new manufacturing workers find their footing — whether it’s kids just out of high school, or those looking for a better-paying career (starting wages are about $18 an hour and rise quickly).

The tuition-free program, Manufacturing 2000 (M2K), teaches the entry-level skills to become a machinist.

“But our job doesn’t stop there. We provide the trainees with professional development and resumes and mock interviews. And through a partnership with several hundred companies in the region, we work to place those individuals into entry-level jobs … We also serve the manufacturers themselves so that we make sure that we’re trying to create a steady flow of new entry-level candidates, and also teach the skills that they really need.”

That includes teaching things like applied mathematics, geometry, trigonometry and reading blueprints. And safety, of course.

It also includes working with new machines at the Anselmo Training Innovation Center on the South Side, such as the Haas ST-10Y (which has programming for mill and lathe on a single machine), the FANUC robotic arm, and the TRAK EVO-T 3D printer. 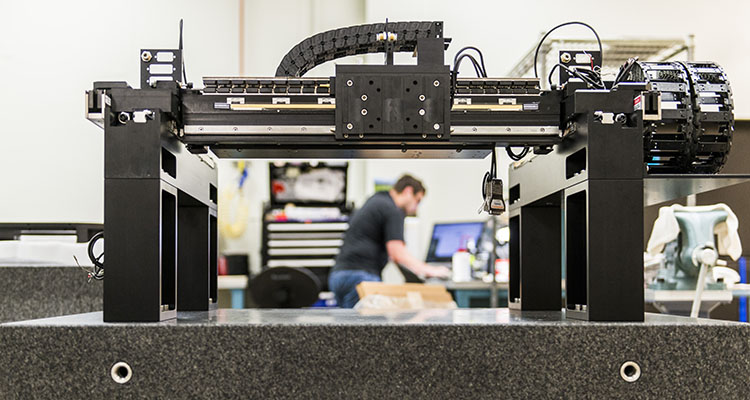 At Aerotech. Photo by Rob Larson.

A new, two-year Registered Robotics Technician Apprenticeship Program is funded by a grant from the Advanced Robotics for Manufacturing Institute (ARM Institute) at Hazelwood Green. The program is part of a collaboration with Catalyst Connection, Community College of Allegheny County and Tooling-U/SME. It is approved by the Pennsylvania State Apprenticeship Council and formally recognized by the Pennsylvania Department of Labor and Industry and the U.S. Department of Labor.

On Oct. 26, an open house will be held at the Anselmo Training Innovation Center for anyone who wants to check out the South Side facility located at 305 East Carson Street, from 10 a.m. to 2 p.m. There will be free two-hour parking at the Highline garage. Registration is requested.

“So, jobs are plentiful,” says Ashbaugh. “It’s actually shocking because right now it’s really an employee market. There’s a lot of opportunity for someone looking for a job that has the right skills to kind of pick and choose where they want to go.”

New Century Careers also runs classes at the Eastern Westmoreland Career and Technology Center near Latrobe. Day and evening classes enroll year-round at the training center on the South Side. And there’s a two-year program for robotics, thanks to a grant from the ARM Institute.

So how do prospective students know that automation won’t put them out of a job in a few years?

“Everybody understands that a machinist has to be an innovator and a solutions provider. A robot won’t be an innovator. In reality, you need a highly technical, skilled team around that equipment to keep it operating,” Ashbaugh says. “It’s the difference between a hammer and a nail gun. I don’t think nail guns ever put a roofer out of business — it just made putting a roof on a lot faster.”