The massive remnants of Carrie Furnace loom over the Mon Valley like a rusting sentinel of a bygone age, when Pittsburgh really was “The Steel City” because it made more steel than just about anywhere else in the world.

In the intervening years since the mill’s closure, it’s been a National Historic Landmark, a movie set, a gigantic venue for music festivals and an utterly distinctive tourist attraction. Now, it’s getting ready for yet another role — home to new 21st-century jobs and businesses.

After investing about $35 million to prepare the heavily polluted, inaccessible site for new development since 2005, the Redevelopment Authority of Allegheny County is partnering with the Regional Industrial Development Corporation (RIDC) — the local nonprofit developer that has the most experience in turning decaying Pittsburgh-area industrial sites into thriving, productive business hubs that are relevant to current economic needs. 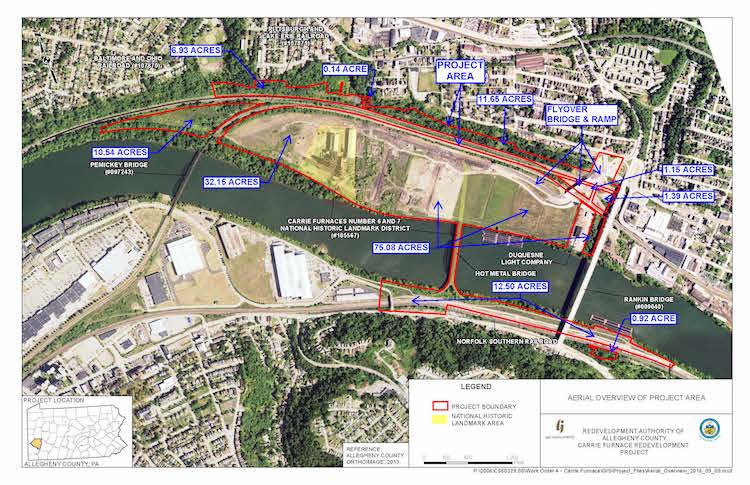 Carrie Furnace’s property is so vast that it spans the boroughs of Munhall, Rankin, Swissvale and Whitaker. It includes 52 acres of developable land — the giant landmark former steel mill will remain — with another 11 acres to the west available for future phases of the project.

Plans are still being finalized, but one possibility is a project with the Pittsburgh Film Office to build The Film Furnace, a studio campus with sound stages and everything needed to grow Pittsburgh’s status as a center for film and TV production.

Other uses for Carrie Furnace include space for tech, research and development, biotech, workforce education, light manufacturing and assembly.

“This site presents a great opportunity to reclaim one of our historic sites and bring it to life with the type of 21st-century jobs that are driving our economy,” says Donald F. Smith Jr., president of the RIDC.

RIDC has more than 7 million square feet of industrial and office space in Western Pennsylvania. It built one of the first suburban industrial parks in America, RIDC Park in O’Hara Township, 55 years ago. It also redeveloped the Pittsburgh Technology Center in South Oakland (formerly the J&L Coke Works), the Keystone Commons in Turtle Creek (a 2.3 million-square-foot former Westinghouse property), the Industrial Center of McKeesport and the City Center of Duquesne (on the former Duquesne Steel Works site).

It also is working on the next phase of Hazelwood Green’s successful Mill 19 project, which built high-tech offices for robotics innovation inside the rusting 265,000 square-foot mill superstructure once owned by J&L Steel and LTV Steel. It now has the largest solar array in Pittsburgh on the roof.

RIDC will start infrastructure and roadway design this fall on the Carrie Furnace site, and will start construction in the spring of next year with 100,000 square feet of tech-flex space to follow.

The project is designed to accommodate the county’s plans for a riverside pedestrian and bike trail along the Monongahela River, connecting it to the Great Allegheny Passage and Westmoreland Heritage Trail.

“RIDC has great experience in this region of shepherding projects to fruition, and we’re delighted to partner with them on the Carrie Furnace site,” says County Executive Rich Fitzgerald. “This is an important project for the Mon Valley. Today’s vote by RAAC brings additional resources to the table to develop this site into the hub of economic activity that we know it can be.”