Pittsburgh now has multiple “unicorns” worth more than a billion dollars — Duolingo, Argo AI, Aurora — and keeps attracting tech giants such as DoorDash and Waymo (Google’s self-driving car division) to the city. Just as interesting is the proliferation of startups, many of which are growing quickly.

There’s a lot going on, so we asked experts in the tech sector to help form our picks for 10 tech companies to watch in 2022. We looked beyond the perennial big players and the companies we featured last year (with a few exceptions). This year’s list shows that Pittsburgh’s tech sector is much broader than robots and computer science.

You’ve likely heard about all the supply chain problems as a result of a global economy snarled by Covid disruptions. One of those choke points is truck drivers — or a lack thereof. Though it generally pays well, it’s a demanding job that requires special training. Locomation is applying Pittsburgh’s expertise in autonomous vehicles to the problem — but doing it carefully and in stages.

The Strip District-based company offers an Autonomous Relay Convoy system, which tethers together two trucks electronically. The (human) driver pilots the lead truck with a second driver as a backup in the autonomously-driven follower truck. Periodically, they switch places. This enables two trucks to operate for 20 to 22 hours a day, delivering double the cargo faster, at twice the distance. Independent analysis indicates that this will also reduce a truck’s greenhouse gas footprint by 22%, fuel consumption by 21% and operating costs by 19%.

More than 1,000 Wilson Logistics trucks will be equipped with Locomation technology this year, the world’s first commercial autonomous truck order.

Wall-crawling robots! No, not creepy at all. Actually, pretty useful — it’s hard to inspect tall things like power plants and pipelines by hand and with the human eye. Cracks and damage need to be detected before it’s too late, and Gecko Robotics’ wall-crawling robot does just that, for giant companies such as BP, Marathon and Duke Energy. Their robots perform ultrasonic and visual inspections that were previously too dangerous or costly to do.

Gecko is expanding into Nova Place on the North Side, taking approximately 70,000 square feet of space. Gecko has 185 employees, with about half located in Pittsburgh, and is looking to double its workforce in 2022.

Sure, autonomous vehicles are seemingly straight out of science fiction. But somebody has to do the actual homework and find out a way to insure these things — and Koop wants to do that here in Pittsburgh.

For everything from robotaxis to shuttles, drones and autonomous trucking, Koop has insurance technology solutions for all kinds of risks, from sensor damage to cybersecurity and software errors. The company recently raised $2.5 million in seed funding and plans to partner with some of the world’s largest insurance companies to develop programs for robotics and autonomous vehicles.

Downtown-based Carnegie Mellon University spinoff Cognistx is working with Canadian biotech firm MagicMed (recently acquired by Enveric Biosciences) to develop an artificial intelligence platform to streamline pharmaceutical research and accelerate the development of psychedelic medicine. Millions of molecules must be tested for efficacy (and side effects) and Cognistx can use past tests and data to help figure out which ones are the most promising, and rule out those that are not.

Formerly BoardBookit, this recently rebranded, woman-founded company made Inc. 500’s list of America’s fastest-growing private companies in 2020, with a three-year revenue growth of 340%. It has also grown into a complete board management platform for clear communication between CEOs, compliance executives and boards of directors.

As a bonus, Govenda is designed to keep up with changing needs for diversity, equity and inclusion imperatives, as well as environmental and social goals.

Science fiction predicted a lot of things, from self-aware robots to the Internet. But even Isaac Asimov would likely be mystified why we’d want to use abandoned coal refuse to mine for Bitcoin cryptocurrency.

But that’s what Stronghold does, with two plants — in Venango and Carbon counties — that convert coal refuse into power that is used to mine Bitcoin. Already, it has acquired thousands of computers and went public in October, raising $132.5 million. Stronghold is adding staff to an office in the Strip District, so you don’t have to commute down a mineshaft in Venango County to work.

An ugly downside to the boom in cryptocurrency is that it’s extremely energy-intensive (and thus emissions-intensive). Stronghold helps remediate land polluted by 19th- and 20th-century coal mining — which is abundant and the state’s largest source of water pollution — and burns it in an emissions-controlled manner to power Bitcoin mining computers. Byproducts include “beneficial use ash,” classified as a fertilizer — and, ultimately, healthier land. Stronghold says that 1,000 acres of unusable land have already been reclaimed. 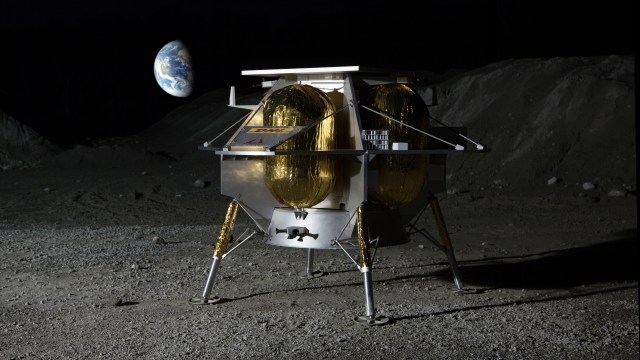 Rendering of the Peregrine Lander courtesy of Astrobotic.

OK, we’re going to make an exception to our rule for not repeating a company from 2021, because this year Astrobotic is literally going to the moon.

If everything goes according to plan, the Peregrine Lander will drop down on the moon’s surface this year, and the autonomous MoonRanger wheeled micro-rover will explore the lunar south pole. Plus, Astrobotic is opening the Moonshot Museum at its North Side headquarters, hoping to inspire new generations to pursue careers in science and the growing space-tech industry in Pittsburgh.

The company has received hundreds of millions of dollars in funding from NASA, and will be carrying payloads from all over the world to the moon, including the MoonArk from CMU. It’s also hiring steadily for its North Side operations, which includes a mission control station from which Astrobotic will monitor the robots’ progress on the moon.

When you’re doing anything in the healthcare realm — you not only have to make your product work, you have to make it meet regulations. To make that progress easier, Rimsys has created a software platform that provides an automated, digital way to streamline global regulatory processes and get medtech products to market faster.

The company has raised $16 million in Series A financing from Silicon Valley’s Bessemer Venture Partners, which has successfully invested in the likes of Pinterest, LinkedIn and Yelp. Already the North Side-based Rimsys counts Johnson & Johnson and Siemens Healthineers as customers. The company employs 30 full-time workers and 30 contractors but could double or triple that number soon.

Ugh, the parking meter. Even though it’s a necessary evil, paying the meter is nobody’s idea of fun. Meter Feeder makes it easy and secure through an online app — just one button tap — so fumbling for quarters in your glove compartment may be a thing of the past.

Launched in 2015, the Braddock-based company has operations all over the country, but just rolled out its parking payment platform this summer in partnership with the Pittsburgh Parking Authority.

The wearable device from Apollo Neuroscience that is said to change moods.

We all want less stress in our lives, right? (Is there anyone who needs more? Asking for a friend …) Well, Apollo Neuroscience, founded by the husband-and-wife duo of Dr. David Rabin and Kathryn Fantauzzi, makes wearable touch-therapy devices that help the body recover from stress through the power of low-frequency sound waves. They can be felt as small pulses on either your wrist or ankle and help strengthen and rebalance the nervous system for better sleep, focus and calm.

Apollo was named a World Changing Ideas Awards 2021: Wellness finalist by Fast Company. Products can be pre-ordered online for $349.