Millvale has just become one of the world’s first two certified EcoDistricts (along with neighboring Etna). It was a long, rigorous process, but one of the biggest steps was building a library.

“Kids are expected to hop on the internet to be able to do their homework,” he says. “In households that experience poverty, the internet isn’t the expected utility that we’ve all become used to. It’s a privilege. The Millvale Community Library has always been a place that’s open with access to the internet, with mobile hotspots that people can check out with their library cards and take home and have the internet at home.”

A functioning library also brings all sorts of other educational opportunities, programs and summer camps to a community.

Another big step in meeting the goals — of both climate protection and equity — was in the creation of the Millvale Food + Energy Hub, in a once-abandoned Moose Lodge.

The building is the first of its kind in the region, says Hussain, with solar panels and a battery backup micro-grid system to keep it up and running if the electric grid goes down for any reason, including a flood.

It now houses office space for community and environmental nonprofits, as well as Sprezzatura, a cafe and catering business, and 412 Food Rescue’s Good Food Project, which turns donated produce that can’t be given away into meals for those in need.

Millvale joins neighboring Etna to become the only two municipalities in the world to be certified by Portland, Oregon-based nonprofit EcoDistricts. 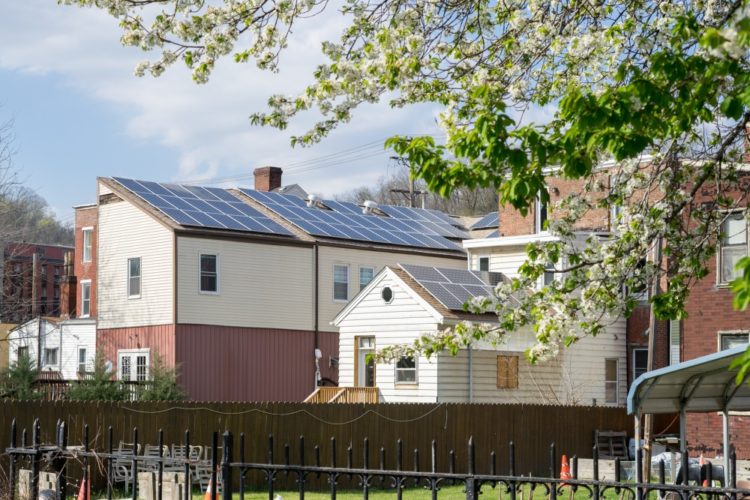 It’s a process that began back in 2011, to improve the quality of life in Millvale.

“Millvale is a strong reflection of the Pittsburgh region in many ways,” explains Hussain. “In the days of industry, Millvale had a thriving business district, close to 10,000 people. And, much like the city of Pittsburgh, as industry left the region, people left the region. By the mid-2000s, Millvale’s population had shrunk close to 60 percent. There was wide-ranging economic devastation, and on top of that, we had three floods between 2004 and 2007.

“Community members were fed up.”

In response, the concept of an EcoDistrict took root in 2011-12, with a Pennsylvania Department of Environmental Protection (DEP) grant and a partnership with the sustainable architecture firm evolveEA. Called the Millvale Ecodistrict Pivot, it focused on building support in the community.

In 2016, the plan was revamped, creating the Millvale Ecodistrict Pivot Plan 2.0, which received an award from the American Planning Association for excellence in sustainability.

“We’ve always held the principle that we can we can make Millvale the most sustainable 0.68 square miles in the world,” says Hussain.

It would be a small impact, however. So they reached out to their neighbors in Etna and Sharpsburg to work on EcoDistrict projects together.

“Those conversations led to the creation of what we call the Triboro District, a partnership between Millvale, Etna and Sharpsburg — creating community-wide programming across all three communities, and increasing our capacity to be able to partner on larger projects,” says Hussain. “And through that planning, Etna achieved its EcoDistrict Certified status.” 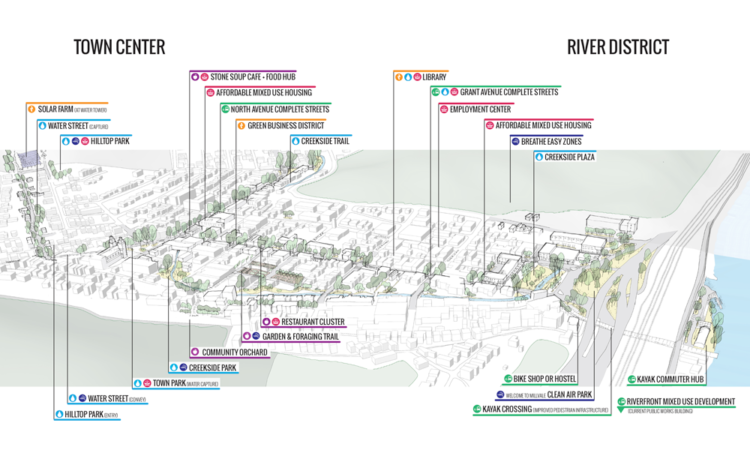 The EcoDistrict project has been an opportunity for a lot of stakeholders in Millvale to work toward a common goal.

“As an owner of a funeral home that is trying to raise awareness of green burial, I am delighted to be a part of a community of like-minded individuals who are striving to leave the place we call home a little better than we found it,” says Jaime Hahn, president of the Millvale Community Development Corporation.

There’s more in the works: Neighboring Sharpsburg is working to become the world’s third certified EcoDistrict.