Once upon a time, outdoor dining was a fun novelty — a treat after a long Pittsburgh winter.

You could make a case that it was starting to catch on pre-Covid — not quite at European levels, but a part of Pittsburgh dining culture that was here to stay.

Now, it’s a matter of life-or-death for restaurants still struggling to adapt to a second pandemic spring. Eating outside is simply safer, and now that the weather has allowed restaurants to regain that precious outdoor space, you can bet that quite a few of your preferred spots have tables and chairs outside, or are getting them ready. Here are some of our favorites:

Long one of Pittsburgh’s best bakeries, Mediterra Bakehouse experimented with a cafe in Sewickley, building meals out of its 20 varieties of handmade bread. Recently, they opened a new spot in an old auto mechanic shop (former home to the departed Fairlane). It has a large patio out front, with heaters and big garage doors that open to let the air in. Specialties include sandwiches, salads, charcuterie plates, coffee, pastries such as scones and croissants and desserts. The spot also features cocktails and an extensive list of wines — some that come with recommended cheese pairings, such as Martha’s 10 Year Port with Stilton cheese and walnuts.

The name Bakersfield conjures oil well roughnecks rowdily getting down to the Bakersfield sound of electrified country music — but we’re talking about a small taco chain based in Ohio. Since tacos are the quintessential street food, eating them outside seems fitting, yes? Under an array of white tents surrounded by palm trees and flowers, Bakersfield claims its spot on Penn Avenue with aplomb. Get some chile-marinated pork tacos with pineapple or some beer-braised carnitas and watch the world go by Downtown (albeit, slowly these days). 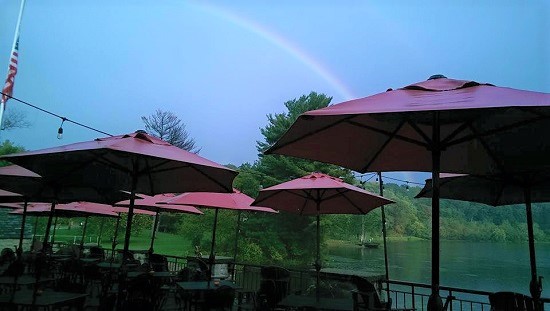 Over the Bar Bicycle Cafe. Note the rainbow! Photo by Kristy Locklin.

After (or before) an invigorating afternoon hike or biking trip through North Park, you can fuel up at this beautiful spot on the water at North Park Lake. There are tables covered by large umbrellas, surrounded by heat lamps if needed. The restaurant is a project of OTB Bicycle Cafe, which has run a terrific bike-themed bar on the South Side for years. The menu is full of bike puns and references, such as Curb Hoppers — fried Wisconsin cheese curds — and Tangled Spokes, four soft-baked pretzels from The Pretzel Shop on the South Side. Big salads and toppings-laden burgers (such as the peanut butter-topped Dirt Rag Delight) round out the menu.

This rarely ever happens, but one of Pittsburgh’s best restaurants has been open for more than 20 years — and still finds ways to surprise diners and stay fresh. Kaya has always had a slim line of outdoor tables on its tight Strip District sidewalk but has found creative ways to expand the outdoor space on 20th Street, too. The secret sauce at Kaya has always been the broad swath of Caribbean and South American cuisine, from a Steak Cuban Sandwich or a Jerk Chicken Torta to Chile Relleno or Tropical Paella. The spot’s refreshing island-hopping drinks are also absurdly attractive as the weather warms, such as a Hibiscus Margarita and Maggie’s Mai Tai, made with local (and excellent) Maggie’s Farm white rum.

Bridges & Bourbon was an early adopter of the bubble strategy for cold-weather dining, when several of those see-through geodesic domes landed on Penn Avenue like some sort of benevolent alien spacecraft. Now, only the tops are covered and vines festoon the rest of the domes, making them seem like overgrown greenhouses with tables inside. Indoor or out, this is one of Pittsburgh’s best spots for bourbon, whiskey (including locals such as Kingfly and Liberty Pole), rye and craft cocktails. The menu starts with lots of snacky-type offerings — Smoked Almonds, Stuffed Dates with chèvre wrapped in bacon, and Shishito Peppers — and ends with a few hefty, filling dishes such as Mushroom Lasagna, Mahi-Mahi Risotto and Wagyu Flank Steak.

A decade ago, the least likely spot for great food in Pittsburgh — other than, maybe, Duck Hollow or inside the Squirrel Hill Tunnel — would have been the dead mall at Allegheny Center. But in the past few years, the mall has been reborn as a campus for tech companies and features an innovative food hall with four micro-restaurants: Guapo (Mexican), Provision PGH (giant sandwiches and burgers), Shaka (Hawaiian poke bowls) and Sultry F&B (wings and parmesan fritters). The outdoor beer garden, in particular, was quite a transformation — and now seems better suited to IPAs and lagers than the ghosts of Zayre and Woolworth. It’s amazing how much atmosphere a few strings of lights can conjure. 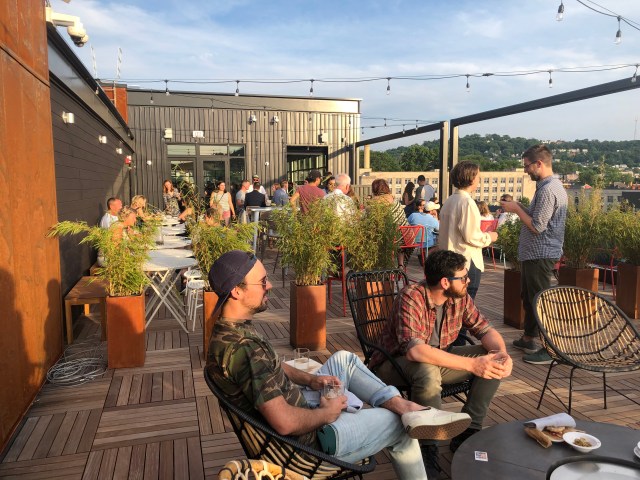 The only hotel in Lawrenceville offers a rooftop deck at Over Eden. Photo by Tracy Certo.

Over Eden didn’t exactly go humble with that name, but this is a bold space — a rooftop deck perched at the top of the stylish TRYP Hotel in the restored former Washington Vocational School in Lawrenceville. Now, big garage doors open onto the roof, giving you vistas of the city in several directions (and, well, the nearby Wendy’s). The menu is creative and eclectic and very friendly to vegetarians, with dishes such as Crispy Sweet Chili Tofu bumping up on the menu against substantial meat dishes such as Braised Short Ribs and a Cuban Sandwich made from homemade porchetta and spicy giardiniera.

Somehow Redfin Blues, which overlooks a marina on the Allegheny, had the restaurant scene on Pittsburgh’s rivers all to itself for the longest time (and still has little company). Located on the island of Washington’s Landing, Redfin is ideally suited for dining on a deck over the water, watching the kayakers and coal barges float by. The establishment has recently constructed a new deck and rooftop, and the seafood-heavy menu seems to be changing more often, adding items such as a Salmon BLT, Garlic Shrimp Skewers and Crab Elote Dip. Note the dog-friendly patio section.