The Pittsburgh Cultural Trust, host of tentpole Pittsburgh events such as First Night and the Three Rivers Arts Festival, will soon have a new leader.

Kevin McMahon, president and CEO of the Pittsburgh Cultural Trust since 2001, announced on Wednesday his plan to retire at the end of this year.

“It has been an absolute honor to serve Pittsburgh for the past 21 years and be a part of a community that has generously supported and attended tens of thousands of events and programs in Pittsburgh’s vibrant Cultural District,” McMahon said in a statement.

McMahon took the helm from Carol Brown, the Cultural Trust’s first president, in May 2001 and set to work creating and renovating spaces for arts and entertainment. Projects such as the SPACE Gallery, 707 Penn Gallery, Arcade Comedy Theater and Liberty Magic — all completed during McMahon’s tenure — paved the way for commercial and residential development Downtown.

Though the revitalization of Downtown’s Cultural District had begun before McMahon came on board, the area was known as a seedy “red light district” just a few decades earlier. People were often “afraid to go Downtown,” McMahon told WESA in 2018. These days, you’d be more likely to run into a giant rubber duck, which McMahon brought to the Allegheny River as a part of the Pittsburgh International Festival of Firsts’ Rubber Duck Project.

Bringing national and international attractions to the region was a priority for McMahon, who spearheaded Pittsburgh hosting the Quebec, Australia, Distinctively Dutch and India in Focus festivals and the Pittsburgh premiere of several internationally-renowned theater companies, such as the Globe Theatre and Dublin’s Gate Theatre. The Cultural Trust also focused on increasing the scope of the Broadway in Pittsburgh series with big name shows such as “The Lion King,” “Wicked” and “Hamilton.”

James Rohr, past Cultural Trust board chairman and former chairman, president and CEO of PNC Financial Services Group, said McMahon’s “commitment to high-quality cultural experiences and stable financial management” will be missed by all. 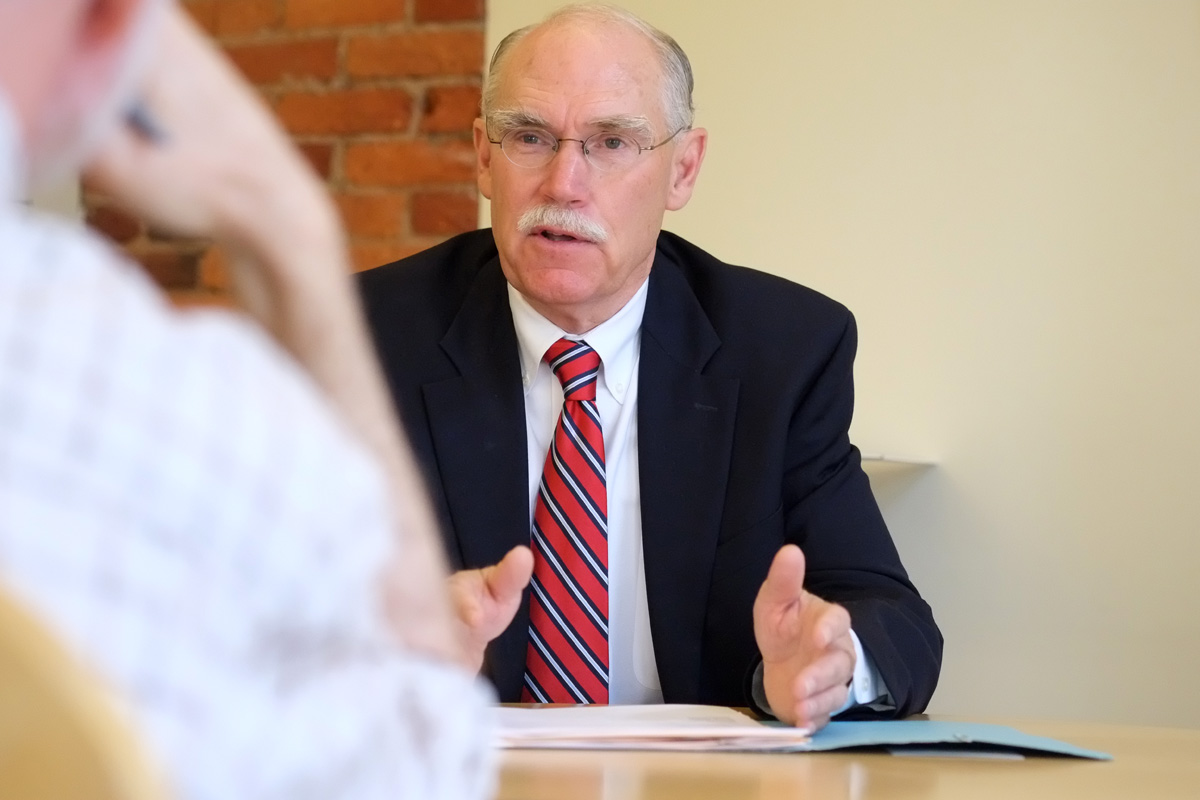 “It has been an absolute honor to serve Pittsburgh for the past 21 years,” said McMahon. Photo by Brian Cohen.

Rohr and Brown brought McMahon to Pittsburgh from Washington, D.C., where he worked as the executive vice president at the John F. Kennedy Center for the Performing Arts from 1992 to 2001.

Under McMahon’s leadership, the Cultural Trust was able to secure several multimillion-dollar donor gifts and grow the annual budget from $20 million to $85 million. It is now within the top five performing arts centers in the U.S. McMahon also brought several key arts-based institutions under the Cultural Trust umbrella, including the Pittsburgh Dance Council, First Night Pittsburgh, Three Rivers Arts Festival, Gateway to the Arts, and the Pittsburgh Children’s Theater Series and Festival.

When the August Wilson African American Cultural Center faced foreclosure in 2013, the Cultural Trust temporarily took over management of the facility until it was able to raise enough money to operate independently. McMahon’s leadership also helped accelerate the growth of several other cultural nonprofits — including Pittsburgh Playwrights Theatre Company, Bricolage Production Company and Arcade Comedy Theater — by providing a physical space for them to operate.

“The arts and cultural environment is a big part of the vitality of Pittsburgh and our economic growth, and Kevin McMahon has been at the heart of our cultural ecosystem,” said Fitzgerald.

The Cultural Trust Board of Trustees, chaired by Highmark Health President and CEO David Holmberg, will now begin a nationwide search for the Cultural Trust’s next leader.

McMahon plans to continue teaching as an adjunct professor at Carnegie Mellon University.

“With a great idea and a get-it-done spirit, anything is possible,” said McMahon. “I so look forward to the next chapter of the Cultural Trust’s incredible story and I’m forever thankful that I was given the privilege to pen a few pages.”