Mining has been going on in Pittsburgh since shortly after the city’s founding, leaving a good portion of the hills you traverse every day with mines (often uncharted and forgotten) deep underneath them and unsuitable for some development.

However, a new federal program is looking at whether the Hill District’s 600 acres of vacant, undermined land may have the potential for renewable energy projects.

A local coalition including the Green Building Alliance, the Pittsburgh Department of City Planning, the Energy Innovation Center and Duquesne Light Co. has received a technical assistance grant from the U.S. Department of Energy to assess “environmentally compromised vacant lots of public land” in the Hill for possible clean energy projects. 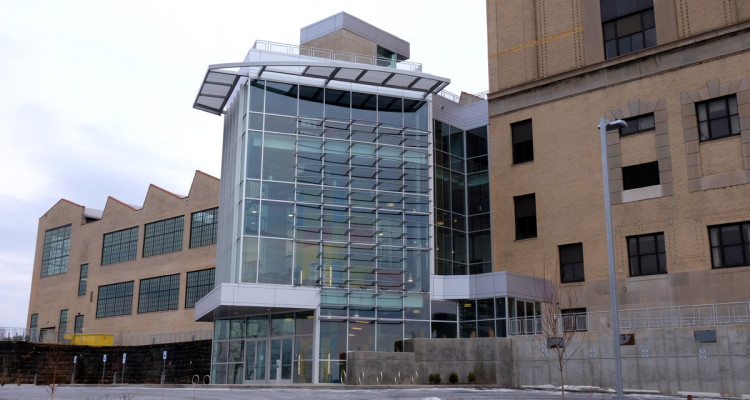 The Energy Innovation Center in the Hill District. Photo by Brian Cohen.

It’s part of a pilot for the Communities LEAP (Local Energy Action Program), which is specifically open to low-income communities burdened by energy costs, or those that are impacted by the shift away from fossil fuels. There are 22 communities in the pilot program (Pittsburgh is the only one in Pennsylvania). The project that’s closest to Pittsburgh is located in Mingo and Logan counties in West Virginia.

The exact amount going to the Hill District has not been announced, but total technical assistance for community-driven clean energy transitions in all the communities is valued at $16 million.

“In Pittsburgh, 61 percent of the housing stock is over 100 years old,” says Jenna Cramer, executive director of the Green Building Alliance. “The majority of these homes are energy inefficient, with high maintenance costs due to aging systems and higher year-round energy bills. This creates a disproportionate financial burden to Hill residents, 40% of which are living under the poverty line.

“By assessing opportunities to retrofit older homes and generating clean, renewable energy on-site, we would be able to pass on savings to those living in the Hill District, while also contributing to a healthier community for all.”

If the land were able to be used for renewable energy, the benefits will flow directly to those living in the neighborhood, via cost savings on their energy bills.

“This technical assistance comes at a great time for the neighborhood,” says Flore Marion, the city’s sustainability and resilience planner, who notes that the Hill District is finalizing its neighborhood plan to shape its next 10 years.

The Green Building Alliance and its partners are also looking at ways to direct revenue from excess clean energy production to a community fund (managed by a community organization), which could support local initiatives like land maintenance and tree plantings.