Even as the pandemic has raged on, the Strip District’s development boom hasn’t slowed, and Oxford Development is right in the middle of it.

The company is moving ahead with the $273 million Phase 2 of its massive 3 Crossings development, and held a beam raising ceremony on Tuesday morning for 75 Hopper Place. 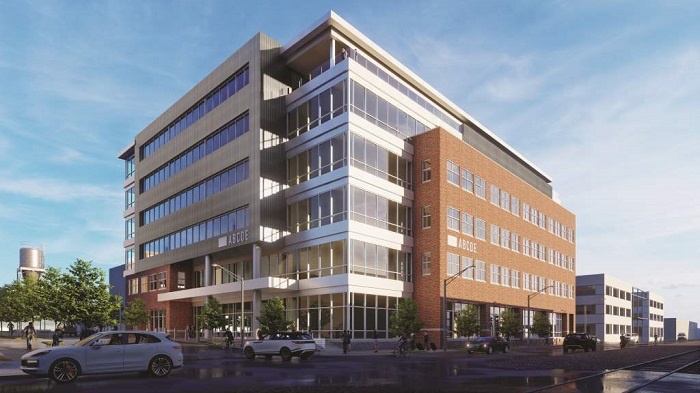 WTW Architects designed the building. This is the culmination of a long-term investment made in the Strip by Oxford.

“We started looking here in 2011-12,” says Guy. “Down here, we had a portion of the river line that was being wasted. We had dark, dank, deteriorated, vacant buildings. So when we had the opportunity to take vacant space — we didn’t have to dislocate one resident, one job. We got to clean up environmental contaminants; we got to make the riverfronts better. When it is all said and done, I was able to develop 35 acres in the Strip District.”

The 3 Crossings property has been home to railway switchyards, warehouses, a steel mill foundry, a box factory, a trucking terminal, and lots of surface parking.

Guy feels like he has a personal stake in this development.

“I’m not just a developer who came to Pittsburgh to do something; I’ve been here my whole life,” he notes. “I’ve played in the Strip District as a young guy, and worked there as an old guy. It means something to me to make a difference.”

A road is now under construction, Hopper Place, that “comes off of Railroad Street at 28th and wraps around to 29th Street,” notes Guy. By the time 75 Hopper Place is complete in September 2021, the road will have been open to the public for six months.

Nearby, at the corner of Smallman and 26th Street, the former Achieva building will be renamed Factory 26, to honor its original use. It’s a 54,000-square-foot renovation that will be a tech/flex building with a state-of-the-art communication and power infrastructure grid, according to Guy. It’s scheduled for occupancy in late August of 2021.

Also under construction is Helm on the Allegheny, a long, slim apartment building with an unusual sawtooth shape that tapers as it gets back to the river, to allow for maximum balcony river views. 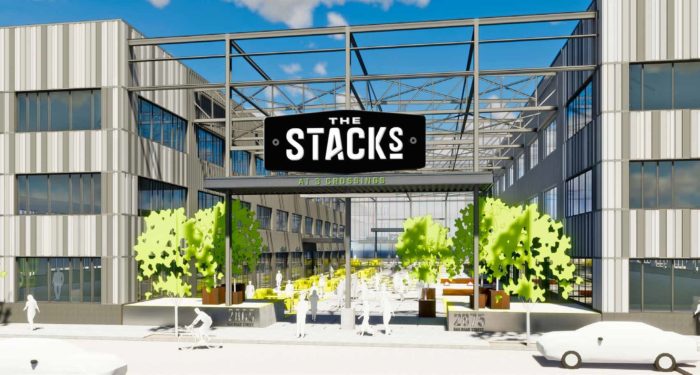 Rendering of The Stacks courtesy of Oxford Development.

Architecturally, the most interesting building Oxford has going is probably The Stacks — two office buildings constructed on the site of the former Packaging Corporation of America warehouse at 2865 Railroad St. A shared plaza is being built between them beneath an array of exposed steel roof trusses from the warehouse.

“That attracted a technology company in the medical research field called Smith & Nephew, which expanded to about 67,000 feet of space,” says Guy. “That project is just about done.”

This is the only place where Guy’s optimism fades. As he says, it’s hard to do retail space, especially food and beverage, in a pandemic.

“That space remains uncommitted. It’s great space; it’s got that whole outdoor plaza. It’s got plenty of parking and the roll up, garage door-type style, so you can open up and make the outside in and the inside out.”

Construction on a parking garage to support the Phase 2 office buildings is scheduled to start in February and finish in late 2021 or early 2022.

There are plans for the 50-foot industrial hopper that was prominent on the site until the six-story building went up. As reported in NEXTpittsburgh earlier, the hopper will be relocated to the riverfront promenade, off the outdoor plaza.

The industrial hopper and steel framework of 75 Hopper Place as seen from Washington’s Landing. Photo by TH Carlisle.

“It’s a big, wide-open expanse,” says Guy, “And that hopper will go in the middle of that. It will be featured as part of that entry point, part of the history of that site.”

With millions still working from home, and many questioning the need for office space, Guy remains convinced the market is still there and will come back even stronger.

“There was that four- or five-month period right after the pandemic started, where you could hear a pin drop,” he says. “Now, it’s very loud. There’s a lot of people in the marketplace looking and asking questions.

Some people will work from home, Guy says but he’s betting many return. “People like to work together and they’re better together. So they don’t know how much and are trying to figure that out. We’re sensing a huge demand building up.”