A massive restoration project is taking place on the Three Rivers Heritage Trail along the Allegheny River on the North Side and now is the time to see it.

And right now the thousands of newly planted (along with mature) redbuds are bursting to life in a beautiful display around Downtown, especially along the riverfront trails. (Check out the section from the Carnegie Science Center to the Heinz lofts.)

In the process, the groups are cleaning up and beautifying a segment of the trail that was in need.

“We’ve all heard about the value of biodiversity,” says Bergman. “When we do this restoration planting, we are significantly improving the habitat for native species. These native plants are providing shelter, food and breeding habitats for pollinators, native birds, bugs and all the other animals that live in that area.” 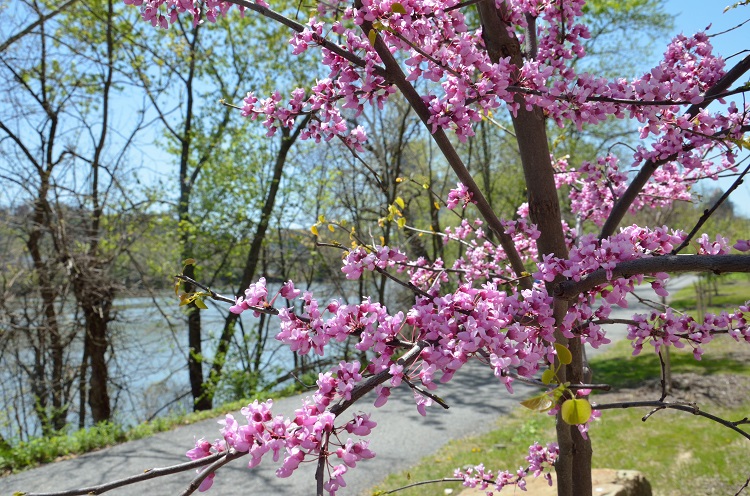 In their place, a variety of trees are being planted, including native redbuds as part of the Pittsburgh Redbud Project, an effort to plant thousands of flowering Eastern redbuds on trails, hillsides and open spaces in and around Downtown Pittsburgh.

“We’re planting about 180 large landscape trees, and 800 restoration trees, in these tubes that protect them for the first several years,” says Bergman. “I believe we’re doing a couple thousand grasses and perennials. It’s a wide array. Some of them will be redbuds, but we also include native species like white oak, buckeye, catalpa, white pine, serviceberry and sycamore.”

The Pittsburgh Redbud Project has planted more than 4,500 trees and shrubs since 2016, and more than 6,200 native perennials and grasses.

This is usually a project staffed with lots of volunteers, but not this year.

“We’re just not able to do the volunteer planting due to the pandemic,” says Bergman. “That’s really sad for us; getting people involved helps people see the value of the work.”

As part of the TreeVitalize Pittsburgh project, the Conservancy — along with Allegheny County Parks, Tree Pittsburgh and the PA Department of Conservation and Natural Resources — is also busy planting 259 street trees throughout the city of Pittsburgh. They’ve planted more than 37,000 since 2008.

Trees add a lot to a city, notes Bergman.

“It’s not just because they’re beautiful,” he says. “We look at them as infrastructure — a public asset that actually increases its value over time as they grow.”

“The benefits are measurable. Healthy trees help reduce your energy costs, because of shade. Those trees help clean the air, control stormwater and improve property values on those tree-lined streets. If you’re in a neighborhood shopping district and it’s lined with trees, people tend to linger longer and spend more money.”

The BNY Mellon Foundation of Southwestern Pennsylvania has also provided a gift of 150 trees to the Pittsburgh Parks Conservancy.

The first are being placed in Allegheny Commons Park on the North Side, as part of the North Promenade rehabilitation project.

The Pittsburgh Parks Conservancy estimates that 31,000 trees in the Pittsburgh area are lost each year due to factors like climate change, disease, deer overpopulation and age. This limits the urban forest’s ability to clean the air, control hillside erosion and stormwater, and cool the city during hot weather.