Alasdair Fraser has been called “The Michael Jordan of Scottish fiddling” — what more do you need to know than that? This annual concert is the grand finale of The Balmoral Classic, which features the U.S. Junior Solo Piping and Drumming Championships. Fraser will perform with Natalie Haas, a brilliant cellist, versed in both sedate chamber music and frenetic Celtic reels.

A band called Real Estate ought to know the value of place, and they do. The jangly, low-key melodic indie rock band coped with pandemic lockdowns by creating an augmented reality concert and performed inside a refrigerator (!). Before that, they did a series of shows outside New York City’s defunct record stores.

Hamilton Leithauser is the vocalist for one of the best semi-unheralded bands of the 2000s, The Walkmen. Kevin Morby is an indie-folk songwriter with a yearning for both urban avenues (Los Angeles, NYC) and country roads (Kansas). Now, the two are touring together and collaborating on a new song called “Virginia Beach,” which starts out as a ghostly acoustic country ballad set aboard a train, and gradually develops into a danceable groove. 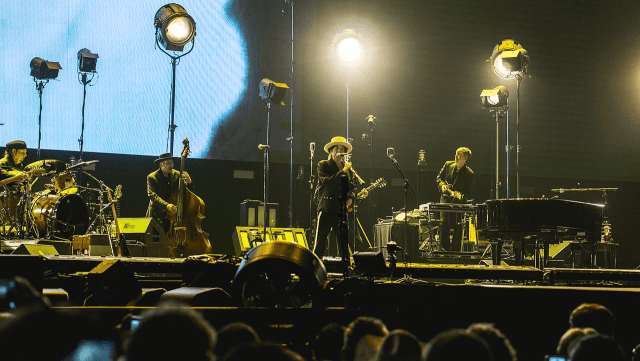 I read this first as “Bob Dylan on the Moon” for a second before realizing it was Moon Township, and it seemed … not that unusual. The guy likes odd venues. I’ve seen him at the Petersen Events Center at Pitt and at Washington Wild Things Park, and now he’s playing at RMU’s basketball arena. Rock and roll’s only Nobel Prize winner seems indestructible and immortal — and is still making excellent records — but, well, who knows how long the 80-year-old can shoulder the rigors of the road. So if you ever plan to see him live, do it now.

Who will speak for the forgotten thrash-metallists? This misbegotten sub-genre of metal, borne out of angry punk rockers who suddenly developed guitar chops — heirs to the legacy of Megadeth and Anthrax — has been long overdue for a reappraisal. Municipal Waste happens to capture the form at its most noxious and powerful. Ripped jeans not required, but recommended.

Indie rock heartthrob/elder statesman (is that a thing?) Evan Dando could always write a tune, and The Lemonheads could always surround it with a suitably sweet ’n’ sour dollop of jangle-pop worthy of their namesake, though Dando has been their only consistent member since 1986.

Pittsburgh’s Anti-Flag has flown the flag for anti-everything political punk for decades now, taking it all seriously, and acting like a song or two can still change the world. Who knows? Maybe they’re right. They’re headlining a long night of punk and punk-adjacent rock, including local favorites Punchline who have been around almost as long.

Starting a band is rarely a good idea. That’s why it’s usually done by teenagers and/or people in their early 20s. They usually don’t know any better. Joe Casey was 35 and had never been in a band — or any musical endeavor, really. He had serious stage fright, and he couldn’t really sing, but didn’t let that stop him. His band, Protomartyr, filled out entirely with dudes 10 years his junior, roared out of Detroit firing on all cylinders — or pick your automotive cliche — swiftly becoming one of the sharpest, most challenging and critically acclaimed post-punk bands in the country. The band’s sound is dissonant and propulsive, and its technical skill is considerable — if often downplayed in favor of repetition and impact. Big, anthemic choruses emerge out of nowhere, atop clouds of squalling Sonic Youth-like feedback and jagged Wire-like rhythms.

Chvrches have been spreading the gospel of bright, shiny crystalline synth-pop from cloudy gloomtown Glasgow, Scotland for more than a decade now. They’ve taken a slightly Goth-y detour with their latest, “Screen Violence,” a horror movie concept record with a guest spot from King Goth himself, Robert Smith of The Cure, on “How Not to Drown.” Oh, and they got a remix by legendary horror movie director and synthesizer soundtrack pioneer, John Carpenter (“The Thing”). Chvrches seem to be at a crossroads and have pulled ever-so-slightly back into Depeche Mode/New Order territory, instead of going all-out for pop-star ubiquity.

Dan Snaith has spent a decade designing swirling, blurry, psychedelic sample-laden electronic music — changing from one ultra-Canadian moniker (Manitoba) to another (Caribou). He’s known for meticulous, fussed over studio productions, then messy, unpredictable interpretations of those same songs live. His own falsetto vocals are showcased on some tracks and fade away completely on others.

Avant-garde jazz has long had a small, but thriving niche in Pittsburgh and the Thoth Trio have been a persistent presence for decades. Led by free-blowing saxophone powerhouse Ben Opie, the trio calls upon the thunderous rhythmic dexterity of drummer David Throckmorton and bassist Paul Thompson. They play originals and dig deep into the catalogs of Thelonious Monk, Ornette Coleman, Billy Strayhorn and others for improvisational inspiration.

For more things to do, check out 13 November events not to miss in Pittsburgh.