The perfect Pittsburgh bookshelf would be made of steel, of course. Preferably forged in the fires of Carrie Furnace from the melted facemasks of vanquished Ravens, and bookended by a bottle of Monongahela Pure Rye Whiskey at one end, and a gleaming Lombardi Trophy on the other.

For a great Pittsburgh bookshelf, though, all you need are books.

Fortunately, there are a lot of excellent Pittsburgh books out there — histories, biographies, novels, photography, even poetry (really!). For our purposes, we kept it limited to books either about Pittsburgh as a subject or stories with Pittsburgh as a setting. Our list is fairly heavy on fiction and history, which are plentiful. If you’ve got some additions, we’d love to hear them.

So, if you have a year or two of free time coming up — or maybe you just really want to learn why this strange, remarkable little city is the way it is — here are a few good places to start:

“Homestead: The Glory and Tragedy of an American Steel Town” by William Serrin.

“Homestead: The Glory and Tragedy of an American Steel Town” by William Serrin (1992). For those of us who grew up in its aftermath, the era of Big Steel seems to stand somewhere between myth and cliché. This really happened, though — hundreds of thousands of immigrants and their descendants flocked to Pittsburgh to sweat and bleed in the mills and mines. Somehow, after decades of failure, they found their own power in solidarity — wielding it first against the strikebreakers and militias of Carnegie and Frick, then against the Kaiser, Hitler and the empire of Japan. They built the Arsenal of Democracy and the American middle class. Then, after a few short decades of peace and broadly shared prosperity, they finally met their match. “Homestead” is one of the best short histories of this era, and the traumatic years after steel’s collapse. There would be no bailouts for Pittsburgh, no soft landing and precious little sympathy. 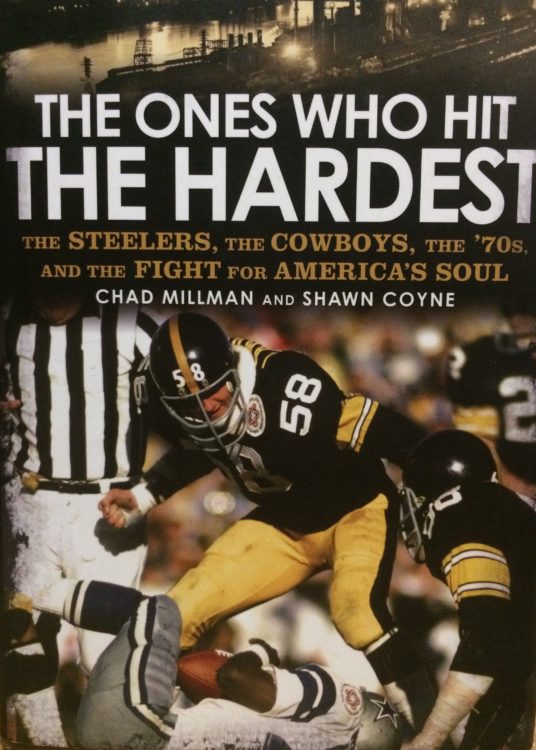 “The Ones Who Hit The Hardest” by Chad Millman and Shawn Coyne.

“The Ones Who Hit The Hardest: The Steelers, the Cowboys, the ’70s, and the Fight for America’s Soul” by Shawn Coyne and Chad Millman (2010). Giant sweaty dudes notwithstanding, football is largely about the management of symbols: numbers on a grid, X’s and O’s, blue-collar, team-first Steelers versus flashy, showboating Cowboys, and so on. As an economic apocalypse paralyzes Pittsburgh, its hard-luck team pulls together and wrenches us all into unknown lands beyond. From the immigrant steelworkers who beat every opponent but globalism to the oil-fueled ascent of Dallas, this book finds the flesh and blood stories behind the symbols. Curiously, Coyne and Millman often find the two cities and teams’ histories intertwined: Dallas’ gusher of oil wealth was seeded by Mellon money, and its team’s success was built on the fleet feet of Pitt (and Aliquippa/Hopewell) superstar Tony Dorsett.

“Meet You in Hell” by Les Standiford.

“Meet You in Hell: Andrew Carnegie, Henry Clay Frick, and the Bitter Partnership That Changed America” by Les Standiford (2005). It’s tempting to oversell Pittsburgh’s historical importance. But it really was a crucial fulcrum for American entrepreneurial ingenuity and a major battleground for the labor movement. The partnership between the world’s richest man, Carnegie, and the ruthless coke king, Frick, was in some ways a success. In others, it was a catastrophe. Carnegie at least felt guilty about fighting an actual shooting war with his own workers (the Homestead Strike), but Frick, on the other hand, had no such qualms. Why isn’t this a movie?

“Tomorrow and Tomorrow” by Thomas Sweterlitsch (2015). This first-time novelist begins with a literal bang as Pittsburgh is erased in an unexplained atomic explosion. Lifting expertly from genre fiction (Philip K. Dick-inflected sci-fi paranoia, hard-boiled detective novels), its hero scans the infinite Archive, a digital simulation of the city taken from the video cameras embedded in everything — from traffic lights and storefronts to people’s own heads — for signs of his wife and unborn child. Then, he finds the body of a girl in Nine Mile Run, killed before the blast. The line between one profanely over-mediated future and the end of everything is drawn somewhere around Pittsburgh. Breathtaking images abound: one character is riding a bus through the Armstrong Tunnel when the bomb goes off. Shielded from the blast, she has to crawl through broken bodies, cars and the partially collapsed tunnel in total darkness, only to emerge in a city aflame. The sheer plausibility of its technology is also frightening — “Adware” is basically Internet access implanted in one’s brain, activated by thoughts. You can translate languages and pull off complicated searches without moving a muscle — but advertisers also have access to your mind.

“Pittsburgh” by Frank Santoro (2018)
There are a lot of great comics creators who live and work in Pittsburgh, including some of the world’s best, like Ed Piskor (“Hip Hop Family Tree,” “X-Men: Grand Design”). None, however, have captured living in the city in such shimmering, impressionistic detail as Frank Santoro. “Pittsburgh” is a family saga chronicling the relationship of Santoro’s parents — high school sweethearts — and its gradual deterioration, to the point where they pass each other in the halls of the hospital where they both work without speaking. The story is refracted through a child’s hazy memories of growing up in and around his grandfather’s convenience store on Monongahela Avenue in Swissvale, as the steel industry begins to crumble around them. “Pittsburgh” is a work of remarkable empathy and sincerity and seems destined to enlarge the defining literature of the city.

“The Homewood Trilogy” by John Edgar Wideman (1981, 1984).  As August Wilson does for the Hill District, Wideman’s painfully brilliant fiction works “Damballah,” “Hiding Place” and “Sent for You Yesterday” dig deep into the life of Black, working-class Homewood. To start, the short stories of “Damballah” explore Wideman’s own family lore — which goes back to the founding of Homewood by a runaway slave — and ties it to those imprisoned by almost-as-hopeless current circumstances. Wideman’s books are never an easy read but succeed as both historical excavation and modernist literature. By comparison, every other book ever blurbed on the cover as “heartbreaking” is lying to you.

“Smoketown: The Untold Story of the Other Great Black Renaissance” by Mark Whitaker (2018). At one time, you could barely swing a trombone in the Hill District without hitting a jazz legend in the making. The Harlem Renaissance is common knowledge, but you could make a case for Pittsburgh’s Hill District as another crucial cultural center of African American life from the 1920s to the 1950s. This book does it eloquently and methodically. There was trailblazing singer Billy Eckstine, who once rivaled Frank Sinatra in popularity — until a racist backlash to a single photo of a white girl with her head on his shoulder tanked his career. Billy Strayhorn, Earl Hines, Mary Lou Williams and Erroll Garner thrilled savvy, multiracial crowds as a host of Wylie Avenue nightspots stayed jumping into the early morning.

Pittsburgh was also the center of the Negro Leagues, with champion teams like the Homestead Grays and Pittsburgh Crawfords filling their rosters with legends like Josh Gibson, “the Black Babe Ruth.” The crusading Pittsburgh Courier, the most widely read Black newspaper in America, went all-in for civil rights, fought lynching throughout the country, rallied black support for WWII and persuaded millions of Black voters to leave the Republican Party for the Democrats. The paper was also instrumental in pushing behind the scenes for Jackie Robinson’s seismic integration of Major League Baseball.

“Amity and Prosperity” by Eliza Griswold.

“Amity and Prosperity: One Family and the Fracturing of America” by Eliza Griswold (2018). After a PA presidential election campaign that seemed like a contest about who could hug the fracking industry hardest, it’s worth considering the full impact of what the state’s unconventional natural gas boom has wrought. This 2019 Pulitzer Prize-winning nonfiction book makes the fracking issue personal, as poet and journalist Eliza Griswold spent seven years observing small-town nurse Stacey Haney in Amity, PA (Washington County), watching the excitement of lucrative natural gas leases appearing in mailboxes slowly turn into a nightmare. First, a drill site appears on a nearby hilltop. Then, animals and pets start to die. Soon, a mysterious illness starts to affect her children. Griswold writes with a poet’s delicate touch about one woman’s unlikely evolution as an environmental activist, after all the safeguards — state, federal, legal — seem to fail, and as one tiny town tries to avoid being crushed in the gears of the massive petrochemical machinery that powers our world. 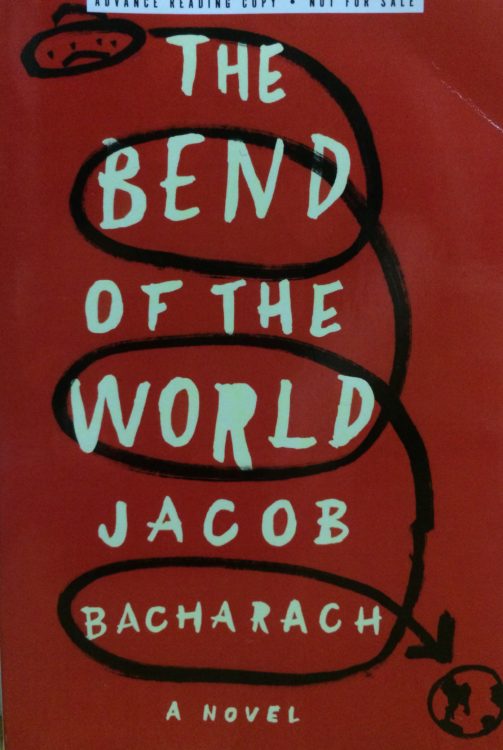 “The Bend of the World” by Jacob Bacharach.

“The Bend of the World” by Jacob Bacharach (2014). It arrived out of nowhere like the Kecksburg UFO, leaving more mystery in its wake. Bacharach’s first novel is about a guy drifting uneasily into his thirties when he spots a UFO hovering over Pittsburgh. Soon, sinister forces are bubbling up from beneath the three rivers and seeping into the cracks between time and space, drugged hallucinations and quotidian reality. There’s an almost unfathomable weirdness lurking out there in the Western Pennsylvania night if you know where to look.

“The Mysteries of Pittsburgh” by Michael Chabon (1988). Sure, Pulitzer Prize-winning novelist Michael Chabon lives in Berkeley now, but if you went to school here, you’re a Pittsburgher for life. Pitt grad Chabon published one of the great coming-of-age novels of recent decades, depicting that cloudy, drifting time of pre-adulthood, set in 1980s Pittsburgh. It’s about alienation and belonging, sex and confusion, family and crime, and that weird “Cloud Factory” down in the ravine by CMU. Chabon’s “Wonder Boys,” set in Pittsburgh’s peculiar, insular academic subculture, is another good one (and made a much better movie than “Mysteries”).

“Me and Earl and the Dying Girl” by Jesse Andrews.

“Me and Earl and the Dying Girl” by Jesse Andrews (2012). For some reason, a lot of great coming-of-age novels are set in Pittsburgh, a few of which fit neatly into the recent boom in Young Adult fiction (two other strong entries are Stephen Chbosky’s “The Perks of Being a Wallflower” and Anthony Breznican’s “Brutal Youth”). “Me and Earl” doesn’t take the obvious routes into mawkish romance or sentimentality, opting for surprise and sly humor instead. A middle-class Squirrel Hill kid named Greg takes a hard look at high school and figures he has no hope of fitting in. Instead, he forms an unlikely bond with Earl, a kid from a broken home in Homewood. Together they make movies — hilarious, micro-budget parodies of the art films in Greg’s dad’s collection. Then Greg’s mom makes him befriend a girl he barely knows, who’s dying of cancer. The boys resolve to make a movie for her, despite their total ineptitude at anything but slapstick comedy.

“The Johnstown Flood” by David McCullough (1968). The dean of American historians made his name (long before “John Adams,” “Truman” and “1776”) with the story of this catastrophic, largely man-made disaster. When the South Fork Dam on the Little Conemaugh River broke, it sent a wall of water rushing into the heart of Johnstown, killing more than 2,000 people. Survivors sued the dam’s owners — the wealthy speculators of the South Fork Fishing and Hunting Club, including the reliably villainous Henry Clay Frick — and were tragically thwarted at every turn. 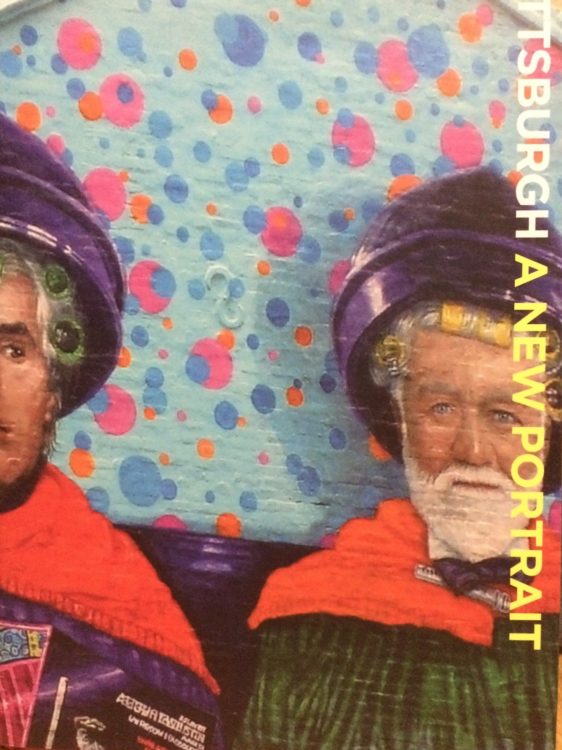 “Out of This Furnace” Thomas Bell (1941). No, not the Christian Bale movie. Rediscovered by a Carnegie Mellon professor in the 1970s, this is a masterpiece of American working-class history, told through the fictional story of a Slovak family arriving in Pittsburgh with only the faintest hopes of a better life — only to find a decades-long fight for every bloody penny.