In post-lockdown Pittsburgh, you’re going to see lots of restaurants with outdoor tables wherever they can find the space, including taking over some streets. It makes sense since it’s safer to dine in the open air, it allows for greater social distancing than indoors and hey, it’s the season.

Here are 14 of our favorite places for outdoor dining in Pittsburgh, with more coming soon. Feel free to check ahead to find out more about each restaurant’s efforts to keep diners safe.

Ten years ago, the least likely spot for great food in Pittsburgh — other than, maybe, Brunot Island, or inside the Liberty Tubes — would have to be the dead mall at Allegheny Center. It was a ghost town, featuring a lot of bleak, sun-blasted cement and not much else. But in the past few years, the mall has been reborn as a campus for tech companies and features an innovative food hall with four different micro-restaurants, Guapo (Mexican), Provision PGH (sandwiches and burgers), Shaka (poke bowls), and something new coming called Sultry. The outdoor beer garden, in particular, was quite a transformation — and now seems better suited to IPAs and lagers than the ghosts of Zayre’s and Woolworth’s. It’s amazing how much atmosphere a few strings of lights can conjure.

This is the perfect little jazz club that Pittsburgh has needed forever, that happens to have great food. Like the Dizzy Gillespie tune it’s named for, Con Alma bops along to its own Latin-inflected rhythm, touching on the cooking styles of several Caribbean nations: Chicken Empanadas, Lechon Asado (Cuban slow-roasted pork with garlic mojo sauce) and even a Jerk Chicken Taco Dinner with mango chutney, plantain chips and guacamole. There’s always music —sometimes inside, sometimes on the sidewalk for takeout, sometimes live-streamed to an online audience. There’s also an immensely charming, if tiny, back patio, with wrought iron furniture, and shade from umbrellas and a large pine tree. 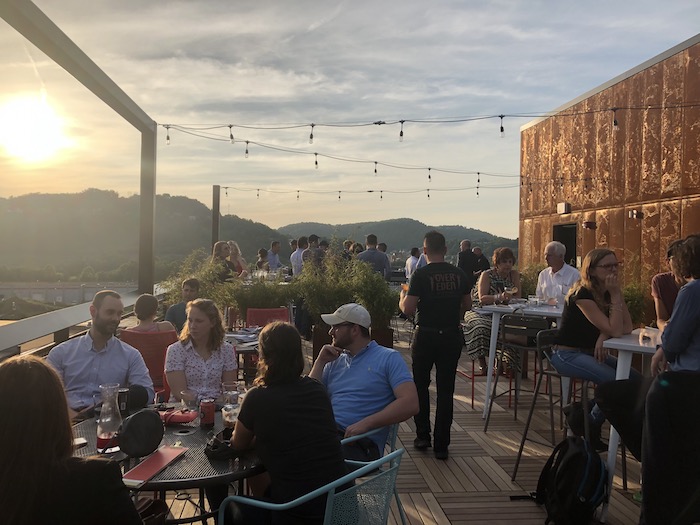 Sunset at Over Eden. Photo by Tracy Certo.

Over Eden went pretty bold with that name. But this is a bold space, perched at the top of the stylish TRYP Hotel, which opened last year in Lawrenceville. Now, big garage doors open out onto the roof, giving you terrific views of the city in several directions. The menu is creative and eclectic, and very friendly to vegetarians, with menu dishes like Fried Chicken or Seitan and Slow-Roast Pork or Tempeh giving you some good options.

They’re only opening the gigantic front yard so far — which was a used car lot not long ago. There’s a lot going on here: picnic tables, cornhole, giant Connect Four, catfish sliders, cornbread, collard greens, as well as brisket and pulled pork from the smoker.

The city’s oldest and historic craft brewery sticks mostly to German food, which, unsurprisingly, goes well with German beers. The Butcher Plate is an obvious place to start, packed with German sausages, pickles, local cheeses and spent grain bread. There’s also a lovely cobblestoned Biergarten, wedged in between the warren of historic 19th-century brewery buildings, with plenty of room to sip a Penn Pilsner in peace.

One of the best people watching perches in Pittsburgh is right above Penn Avenue on the second-story balcony at Roland’s in the Strip. You can eat big pots of mussels or lobster roll sliders while you watch the city hustle by, bound for groceries and black-and-gold gear.

One of our favorite places in Pittsburgh, like many, isn’t designed for outdoor seating. They’re doing it anyway, on an adjacent side street closed for diners. Expect to see a lot more of this in summer. Grab a Banh Mi or Tiki Turkey Sandwich, or try something unusual like the OK Boomer, with fermented vegetables and three types of mushrooms, or A Reason To Try Zhug, which showcases the Yemenite green hot sauce with roasted root vegetables on a pita. (We tried this last night indoors and swear by it.)

Sadly, one of Pittsburgh’s best live music venues has been rendered dormant by the pandemic. However, Spirit also happens to serve some of the city’s best pizza. The pies are all interesting, but check out the Garden Pie with Tiny Seed Bok Choy and Joddo’s Turnips. The labyrinthine layout of Spirit also includes a big back patio, with ample space for social distanced dining. They’re expanding seating into their parking lot soon, allowing for even more room to dine outdoors.