So we all know that this was the worst year for Pittsburgh dining ever. Nobody had plans for a worldwide pandemic, and the restaurant industry was hit especially hard. Right now, indoor dining is closed through Jan. 4 by state order to reduce the transmission of Covid.

I’ve been writing this roundup of every year’s best new restaurants to open in Pittsburgh since 2016. There were great years, many of them. Every time, I always did my absolute best to check out as many new restaurants as I could, then make my choices.

That wasn’t really possible this year. I did a fair amount of takeout, though. I also relied on the recommendations of the NEXTPittsburgh team, especially Eat/Drink Editor Kristy Locklin.

The good news is that dining didn’t die in Pittsburgh (yet). In fact, I thought we’d struggle to find 20 new places that opened in 2020, but that wasn’t the case — there were still lots of people willing to risk starting a food business, even in these terrible times.

Hats off to them, seriously.

If you want to support local restaurants right now, getting takeout and delivery are the best ways to do it. Though, some restaurants are braving the cold outdoors with heat lamps or fire pits.

Yes, you should also probably worry about your favorite restaurants closing for good.

A conversation in September with one of Pittsburgh’s best chefs, Justin Severino (Morcilla, Salty Pork Bits), was especially worrying. While explaining the narrow margins restaurants operate under when times are good, he noted that the new numbers are close to impossible: “That economy doesn’t exist anymore. It’s belittling. We’ve all been made to feel like we failed.”

And that’s before dining rooms were closed (temporarily, we think).

A lot of good-to-great Pittsburgh restaurants have closed so far this year, including Shiloh Grill, Brillobox, Mixtape, NOLA on the Square, Coca Cafe, Spoon, Supper on Penn, Union Standard, Pizza Taglio, Alexander’s Italian Bistro, The Twisted Frenchman, Brugge on North and Smallman Galley in the Strip (which will be reopening in Bakery Square in 2021). Many others still exist in a liminal state between being open and closed, as they continue to weigh their options. 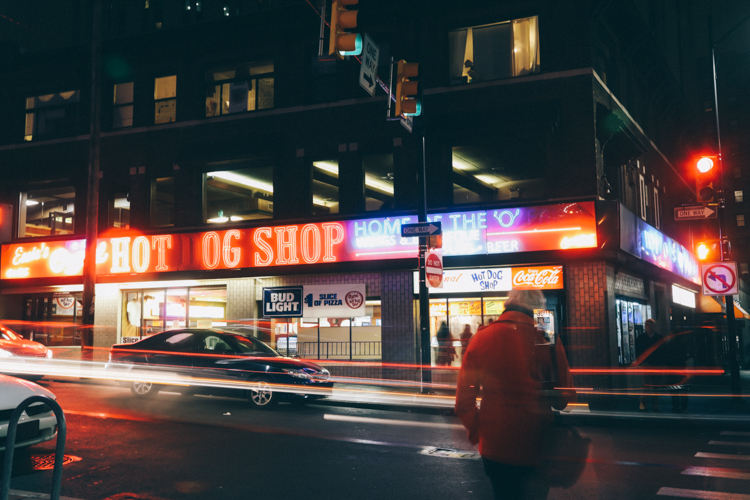 2020 was also the year Pittsburgh collectively freaked out when The Original Hot Dog Shop closed in Oakland (RIP, never forget).

Additionally, a curiously large number of restaurants were on the move in 2020. Gaucho Parrilla Argentina moved from the Strip to Downtown into the old (rather big) Six Penn spot. Chicken Latino left the Strip in search of cheaper rent in Beechview. Breakfast and lunch specialists Square Cafe left Regent Square for the vastly bigger former Spoon/BRGR space in East Liberty. Tootie’s Famous Italian Beef, a late-night South Side staple, moved to Market Square.

Perhaps the most-anticipated restaurant of the year is Wild Child in Etna, featuring “eclectic coastal cuisine” from one of Pittsburgh’s best chefs (and a James Beard Foundation Rising Star Chef semifinalist) Jamilka Borges. It looks like we might still have to wait until 2021, however.

Here’s hoping 2021 is better, and we see our favorite restaurants again on the other side.

It was probably inevitable that Deutschtown’s eminently walkable, pedestrian-scaled main business district would begin to form its own restaurant row. Fig & Ash could be that game-changing draw that brings people in from outside the neighborhood, with its emphasis on “farm-to-flame” elevated comfort food and Italian and French flourishes. Chef Cory Hughes — who has cooked for everyone from the U.S. Marine Corps to the Googlers at Bakery Square — changes the menu constantly, inspired by the seasonal ingredients available. That means everything from Barley Risotto with foraged mushrooms, to Dry-aged Duroc Tomahawk Pork Chop with sage spatzle, to Braised Jamison Farm Lamb Shoulder with buttermilk polenta, rainbow Swiss chard and pistachio lamb jus. For dessert there’s a Roasted Fig Bread Pudding, of course. They also mill their own grains, bake their own bread, make their own pasta and ice cream, and butcher meats on-site. Everything revolves around a wood-fired grill made by local designers Temper and Grit. 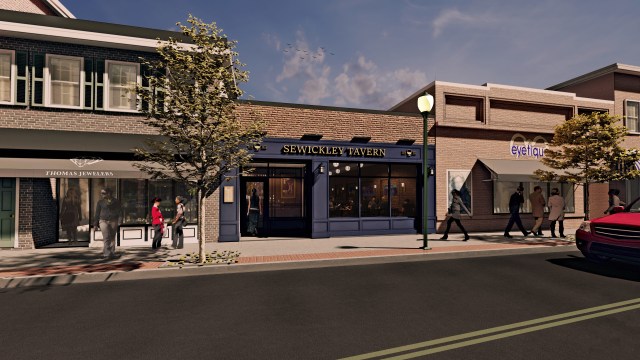 Despite the rather run-of-the-mill name, Sewickley Tavern took a lot of risks and tried a lot of new things. In 2019, they decided to become the first restaurant in the world to earn RESET air certification, the highest internationally-recognized standard for indoor air quality, with sensors placed throughout the building. Then, a worldwide pandemic hit with an airborne virus — and being engineered for excellent air quality suddenly seemed prescient. The restaurant also has noise monitors, giving them the ability to adjust what is a top complaint of diners — excessive noise. The menu is mainly elevated bar food — this is a tavern, after all — like Tavern Baked Oysters and Blackout Meatball Sliders on challah slider buns. There’s also a strongly curated menu of large entrees, ranging from unique items like Lobster Spaghetti to standards like Filet Mignon and Jambalaya.

It was one of those unheralded mysteries of Pittsburgh. Somebody had clearly started renovating this long-abandoned building on a key corner in Bloomfield and then stopped. And there it sat, empty, for a long time. Years went by. We even wrote about this mysterious vacancy — and then, suddenly, Rebecca Avila contacted us and said she and her husband were opening El Sabor Latin Kitchen on Penn in the space. It’s a cute little spot arranged around a triangular bar, with big windows for panoramic views of this busy pedestrian nexus near Children’s Hospital. The menu is mainly Mexican, though co-owner Henry Avila is from Honduras, so there’s that influence, too. The tacos are available in flour tortillas or Tijuana-style soft corn, and fillings range from shrimp to chorizo to grilled tofu. Bigger dishes include filling fare like Huevos Con Chorizo —scrambled eggs with spicy chorizo sausage, and Chipotle Chicken Paella, served atop rice.

Coop de Ville looks like way more fun than it needs to be — because the food is guaranteed to be great, coming from the Richard DeShantz Restaurant Group, which is synonymous with ambition (täkō, Butcher and the Rye, Meat & Potatoes, Poulet Bleu) and originality in Pittsburgh dining. Coop de Ville has eight lanes of duckpin bowling, along with pinball, arcade games, ping-pong, pool tables and even a lounge with comfy couches and a little library. (They also have a full-time designated cleaner whose job is to constantly disinfect games and high-touch surfaces, if you’re wondering). Fried chicken is the star here, which makes the Strip’s recent loss of Chicken Latino sting a little less. You can get white or dark meat or a half-chicken with spices like Garlic Parm and Nashville Hot, and sauces like Hot Honey and Roasted Garlic Ranch. Most of these flavors are available as sandwiches, including the Korean-inflected K-Town, with gochujang mayo and fermented pickles. They’ve also got a full coffee bar.

Empanadas are the perfect takeout food — you can even walk and eat them right out of the bag. Mi Empanada’s are made in the Argentine style, created by a native. You’ll discover Beef Empanadas in a butter puff pastry with rustic seasonings, onion pancetta, eggs, olives and onions. And Ham & Cheese Empanadas with meat hand-chopped off the bone and béchamel sauce. They also offer Spinach, Sweet Potato and Humita Empanadas, which are filled with savory squash, corn and sweet bell peppers. They’re vegan and delicious.

It’s striking, but no longer odd, that some of Pittsburgh’s absolute best restaurants in recent years are vegan (no meat, no dairy): Apteka, Onion Maiden, B52. Clearly, the market is there for a purely plant-based approach, when the cooking is done with care and creativity. This spot on the South Side continues this trend while focusing on breakfast and lunch. Their Matcha Pistachio Croissants demonstrate an adept hand at pastries, as do the Glazed Brioche Doughnuts. There’s Avocado Toast with pickled red onions, coconut feta and a lemon turmeric ginger vinaigrette, and a triple-decker Seitan Club sandwich featuring seitan (a meat-like dish made from wheat gluten), vegan rice paper bacon and avocado. For lunch, they’ve got wildly original dishes like the Gochujang BBQ Chick’n Sandwich with vegan “BBQ Roasted Soy Curl Chick’n” on a half-baguette.

Downtown has long needed a superior breakfast spot, and The Speckled Egg found the perfect place in perhaps Downtown’s most beautiful building, the recently-restored (to the tune of $100 million) Flemish-Gothic masterpiece known as the Union Trust Building, which was built in 1918. Run by the folks behind Josephine’s Toast in the original incarnation of Smallman Galley, The Speckled Egg has a sense of humor, too. The Millennial is, of course, avocado toast (which has become a meme), that can be garnished with bacon, lox, sausage or crab. There are standout standards like the Brown Butter French Toast. They also have a full-service coffee bar and offer energizing juice blends from Pittsburgh Juice Co. and really unique cocktails. Some examples: the Vespa Yinz with Boyd & Blair Potato Vodka, Ginzer Gin and Axta White Vermouth, and the Pittsburgh is a Zombie Town, with Cazadores Reposado Tequila, local Maggie’s Farm Rum, grapefruit and cinnamon, among other things.

Perfectly suited to the times, the team behind the superlative Strip mainstays Pizzeria Davide and DiAnoia’s Eatery have opened yet another storefront, this one focused on takeout. It’s a bakery, first of all, featuring everything from crusty baguettes to pillowy ciabatta to specialties like Cacio e Pepe Sourdough and Tomato and Olive Focaccia. They also sell freshly-made pasta, homemade sauces and Italian comfort food classics like their customer faves Greens & Beans, 3 Cheese Lasagna, Vegan Eggplant Lasagna, Meatballs, and Sausage & Peppers with house-made sweet Italian sausage.

Photo courtesy of Pita My Shawarma.

Pita My Shawarma started out as a food truck, which did well enough to warrant a storefront on Butler Street in Lawrenceville selling Lebanese and modern Mediterranean food. Held together by the best pitas in Pittsburgh — freshly made from Pitaland in Brookline — they specialize in classics like the Falafel Wrap and the Chicken Shawarma with rotisserie-cooked shaved chicken drizzled with garlic sauce. They make their own Hummus and Baba Ganoush Dip, and throw in a few curveballs like Halloumi Cheese Fries — basically, deep-fried halloumi cheese sticks with chili paste dipping sauce. Even the fries are spiced distinctively, with sesame and Za’atar seasoning.

Remember when we could go on vacations to tropical places, and it was no big deal? Yeah, not happening anytime soon. Still, you can get a taste of the islands (for much less money) at this great new Jamaican joint in Sharpsburg. That means things like Fried Plantains, Beef Patties, spicy hot Jerk Chicken, Curry Chicken and Seafood Fritters. For a bigger family-sized meal, you can get the Oxtail Dinner or even the traditional Goat Dinner in a Brown Stew or Curry. It’s a welcome addition to the neighborhood, which is changing fast.