Several NEXTPittsburgh staffers highly recommended this new spot in Dormont, which serves breakfast, lunch and dinner. The owner, Sam Boukhima, grew up in Morocco on a farm, with fresh ingredients always at hand. This influence shows up in dishes like Zaalouk, a Moroccan spiced spread made from roasted eggplant, tomatoes and sweet peppers, and Moroccan Roasted Chicken with spiced lemon jus. For the most part, though, the menu sticks to more familiar fare, like burgers — the Fire Burger with fried cherry peppers, pepper jack and Sriracha mayo is the specialty. For lunch, they serve Tacos (beef, chicken or tofu) and Grownup Grilled Cheese with applewood bacon. For breakfast, there’s Jumbo ’n Eggs Croissant, with Boar’s Head mortadella and a cheddar cheese omelet on a buttery croissant served with home fries.

Somewhat incredibly, Juliana and Sam Boukhima opened a second eatery this summer (during a pandemic!) just a few doors down from their Fire Bar & Grill on Potomac Avenue in Dormont. (No relation to Steelers star receiver JuJu Smith-Schuster — though that name can’t hurt). I’ve long been a proponent of Pittsburgh needing more delis, and this is a good one. They use local Mancini’s rolls, piled high with Boar’s Head sliced meats. They’re also big on meatballs, which can be served on a locally-made Mancini’s Italian roll. For a change of pace, there’s the Acai Bowl, the South American superfood berry, topped with granola and a smattering of fresh fruit.

A native of Burgundy in France runs this little creperie in Mt. Lebanon, serving the ultra-thin French pancake filled with everything from Nutella to ham, egg and cheese. La Tatin Crêpe is filled with apple sauce, cinnamon and salted caramel. They also sell got Gaufres (French waffles) and Galettes (French tarts) like La Bechamel filled with Béchamel sauce, ham and mushrooms. Bonne chance, mes amis!

The Golden Age mocktail is a ginger tumeric tonic. Photo courtesy of M.I.C.K.

M.I.C.K. stands for “Michael’s International Creekside Kitchen,” a project from chef Michael Marino that specializes in healthy, plant-based dishes (with some meat items) from around the world. (If there’s any current trend in Pittsburgh dining, plant-based vegan/vegetarian is it). If it’s possible to have too much fun naming your dishes, M.I.C.K. does it. There’s the Hail Seitan, showcasing the wheat gluten-based meat substitute with caramelized onion, mushrooms, roasted red peppers, broccoli, white beans, purple cabbage, green peas and vegan chorizo. There’s also the General Tso What, with crispy fried cauliflower in a tangy brown chili and garlic-spiced sauce. And there’s even an eccentric take on the French-Canadian comfort food poutine — Poutine it Down — featuring French fries topped with smoked gouda, marsala gravy and roasted red peppers. 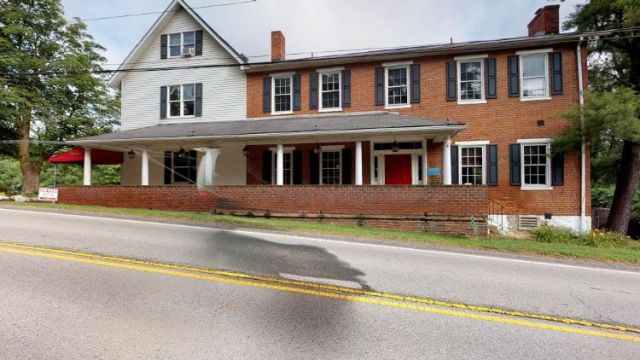 Inside a historic red-brick landmark built in 1850 (it was a speakeasy during Prohibition), known for a long time as the Cross Keys Inn, then Andora, is the new Brick & Barrel. The focus here is on pizza and burgers, but they’re anything but typical. The Fondue Burger features blue cheese fondue and bourbon onions, and The Barnyard Burger features beef and rosemary ham, bacon, fried egg, smoked cheddar and coffee aioli. The pizzas range from The Pittbull with carved ham, sausage, bacon and pepperoni, to the Little Miss Figgy, with balsamic marinated figs, prosciutto and fresh mozzarella.

Briefly branded as a sit-down restaurant called Menuette, the relentlessly cute Oak Hill Post (its nickname is O’Hi) brings a casual pasta-forward friendliness to one of Pittsburgh’s most underrated and delicious neighborhoods, Brookline (seriously, check out Pitaland and Las Palmas while you’re there). Chef/owners Christian Schulz and Rebecca Nicholson developed a following through their pop-up events, and fearlessly combine bold flavors in items like homemade Chicken Kimchi Sausage and Curry Banana Pistachio Biscotti and Nutella Bread Pudding. But there are also familiar staples available, like house-made Pappardelle and Fettuccine pasta, and Puttanesca sauce.

“The standard is the standard,” is one of the best Coach Mike Tomlinisms, part nonsensical, part profound. This Standard Market & Pint House, located in the old Sonoma Grille space Downtown, is trying to be a bit of everything — a coffee shop and diner in the morning, a grab-and-go lunch spot at midday and a cocktail-slinger at night. For breakfast, you can get things like a Smoked Salmon Benedict or Egg Sandwich with Serrano ham and Harissa aioli. For other times of day, try the House Smoked Wings and a Buttermilk Fried Chicken Sandwich with pickles and buffalo sauce on brioche. The Standard features a self-serve PourMyBeer tap system that dispenses 30 types of beer, wine and ready-made cocktails, which is unique in Pittsburgh.

In a year like 2020, this place gets a special mention. Chef Kevin Watson — veteran chef for Savoy, The Café at the Frick Cafe and various Steelers — not only makes great comfort food, but he also donates meals to seniors in the community. There’s a form on the website where you can nominate someone for a meal, and he’ll deliver it to them. The menu features a lot of comfort food classics, and some offbeat items like the Chipotle Lime Steak Sandwich with hanger steak and portobello mushrooms, Shrimp Scampi Pizza with a garlic cream sauce, arugula and goat cheese, and Grilled Shrimp with Yuzu Butter, grilled butternut squash and shishito peppers atop sesame sticky rice.

It’s a pretty big risk, opening a bar in the middle of a pandemic, but the beloved, out-of-the-way neighborhood bar Sharp Edge had closed, and St. Clair Social has arisen to take its spot. (It was also briefly SYN Bar & Taqueria + Pizzeria). It’s still a cozy, intimate barroom, focusing on distinctive, uncommon beers, such as the Small Crop IPA from Hop Farm Brewing Company in Lawrenceville and Hershey’s Chocolate Porter from Yuengling. The food is way better than usual for a bar and worth the trip. There are wings, of course, with unique flavors like Pomegranate BBQ, Bourbon Buffalo, Peach BBQ and Korean BBQ — but they also serve Seitan Wings, for vegans and vegetarians to enjoy. There’s also a PB&J (Pork Belly & Jam), with chili beer-braised pork belly, peanut salsa macha and raspberry sauce, inside sourdough bread. And interesting dishes like General Tso Tofu Tacos, and a Triple Decker Pimento Grilled Cheese.