The Pittsburgh-born playwright, who set most of his major works in the Hill District, is a towering presence in modern theater. His award-winning plays are performed all over the world, and Denzel Washington is bringing them to the big screen, having started with critically acclaimed adaptations of “Fences” and “Ma Rainey’s Black Bottom.”

On April 16, the first permanent exhibition dedicated to Wilson’s life, August Wilson: The Writer’s Landscape, will debut at the Downtown center that bears his name. It was assembled in collaboration with Constanza Romero-Wilson, Wilson’s widow, who is chief curator for the exhibit. Admission is free.

The Writer’s Landscape will include 3,600 square feet of gallery space and exhibits, including:

• Wilson’s writing desk, one of his most prized possessions dating back to the 1920s, on which he partially wrote some of his masterpieces;

• “Gem of the Ocean” prop masks featured in the 2004 Broadway production.

“It has long been a goal of the August Wilson African American Cultural Center to create a permanent exhibition that celebrates the life of August Wilson and the Pittsburgh community that inspired him,” says Janis Burley Wilson, president and CEO of the center.

“Having additional time to design and construct the experience has allowed us to reimagine ways in which all who come to the center can immerse themselves in Wilson’s work, amplifying his legacy even further and inspiring generations from around the world for years to come.”

The center will collaborate with its scholar-in-residence Sandra Shannon, professor of African American Literature at Howard University, founder of the August Wilson Society and the foremost scholar of Wilson’s work. Other contributors include longtime Wilson collaborators and Tony Award-winning scenic designers David Gallo and Viveca Gardiner.

Eisterhold Associates, whose work includes the Rosa Parks Museum in Alabama and the African American Museum in Philadelphia, designed and fabricated the exhibition.

Pittsburgh-based filmmaker Emmai Alaquiva, one of the first participants in the August Wilson Center’s B.U.I.L.D. artists-in-residency program, created an original soundscape for the exhibition based on themes found in Wilson’s work. 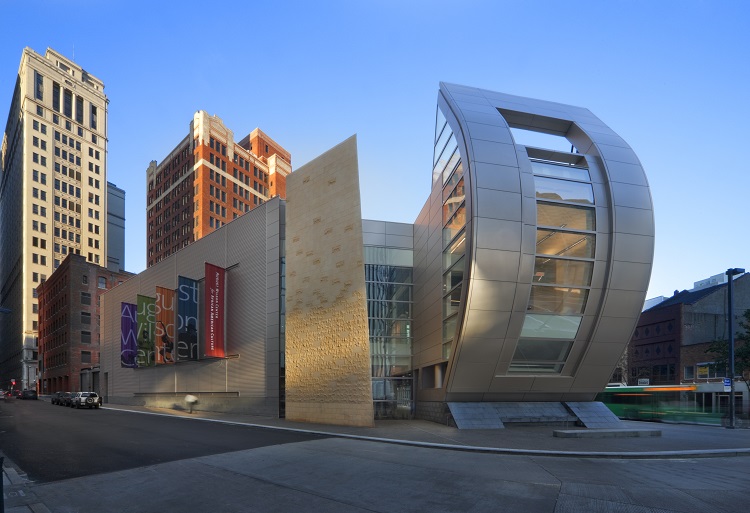 The exhibition will be presented as a story, telling visitors about Wilson’s life and work. It includes the following sections:

• The Coffee Shop, inspired by a local coffee shop in the Hill District that a young Wilson frequented and where he observed the day-to-day interactions of its diners. Later, the coffee shop would provide the basis for many of his characters and the inspiration for his stories. Visitors will be able to sit and immerse themselves in Wilson’s world, from the sounds of the shop to newspapers and magazines from the 1960s that Wilson himself may have read.

• The Office, a replica of Wilson’s home office showcasing his working environment and the items that he prized, including his writing desk with projected interactive images that allow visitors to learn more about his creative process, along with music from his personal record collection and manuscripts of his work.

• The Street, a symbolic walk through Wilson’s “American Century Cycle,” featuring a gallery dedicated to each of Wilson’s 10 plays, utilizing videos, props and costumes from notable productions to provide insights on the decades the works are set in and the events that took place in Pittsburgh and across the nation at that time.

Funding for the exhibition was provided by the Hillman Foundation and the Henry L. Hillman Foundation. Another key collaborator is the University of Pittsburgh, which recently acquired Wilson’s archives from his estate. TurnKey Education is helping develop tools for teachers and students to use before and after a visit.